Our 5Q Poet Interview series for National Poetry Month continues with this interview with Timothy P. McLaughlin about his new book, Walking on Earth and Touching the Sky: Poetry and Prose by Lakota Youth at Red Cloud Indian School. Graduate student Stephanie Cacciavillani offers this interview (plus) with Tim.

Background on Timothy P. McLaughlin
I had the wonderful privilege of interviewing teacher and poet Timothy P. McLaughlin. Timothy just recently got his first work published titled, Walking on Earth and Touching the Sky: Poetry and Prose by Lakota Youth at Red Cloud Indian School. His book is a collection of writings by students who attended Red Cloud Indian School. Timothy’s students have won numerous awards including first place in the South Dakota State Media Fair in 1999 and 2000, New Mexico State Champion of the Poetry Out Loud National Recitation Contest in 2006, 2007, 2008, 2009 and multiple first, second and third place prizes in the US Office of Indian Education Student Artist Competition in 2008, 2009, 2010.

McLaughlin is the founding director of the Santa Fe Indian School Spoken Word Program (SFIS). Under Timothy’s leadership, the SFIS Spoken Word Team participated in the Brave New Voices National Youth Poetry Festival as Team Santa Fe from 2007 to 2010. He has been teaching and coaching in Native communities since 1997, beginning at Red Cloud Indian School on the Pine Ridge Reservation in South Dakota, then at Arlee High School on the Flathead Reservation in Montana, and now at SFIS in New Mexico.

Timothy has also received a Writing Residency Fellowship from the Lannan Foundation in 2011. He also performs his poetry regularly and is featured on the album Return to the River by Madi Sato. He lives with his wife, Julie and their daughter, Anjamora, in Santa Fe, New Mexico. 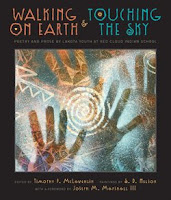 “Walking on Earth and Touching Sky is more than lyrical observation. It is actual physical experience. And it is concrete consciousness of one’s homeland prairie, desert, plateau, reservation community. For it is Indigenous awareness of land, culture, and community that is being perceived and expressed by Lakota youth. At the same, it is also the awesome voice that only poetry and story can put into words. While these writings are those of Lakota youth at Red Cloud Indian School, there also the words of the Lakota land, culture, and community spoken by those whose legacy it is to carry destiny into the future. And so it shall be done with joy and sadness, laughter and anger, love and fear, with will, stamina, determination, and with sacredness, faith, belief, courage. And, yes, with love always.”

1. In your book description it states that the poems in your upcoming book, Walking on Earth and Touching the Sky; Poetry and Prose, enables readers to learn about the unique lives and heritage of students growing up in such distinctive circumstances and straddling cultures. What exactly do students face growing up on a reservation?

Mr. McLaughlin: "From my Introduction to the book: Life on the Pine Ridge Indian Reservation is difficult and complex. Shannon County is the second poorest county in the United States and conditions are very harsh. The people struggle with unemployment, poor housing, disease, alcohol and drug abuse, violence, depression, and more. Yet, Lakota people are amazingly resilient and spiritually powerful. Among the Lakota, there is a tremendous love for the land, a system of profound cultural ways, a sense of community that often supersedes the struggles, and a capacity for humor as medicine for continuation and a source of joy.

Originally, the Lakota language was only spoken and not written. Lakota people recorded information and occurrences through pictographs, often drawn on buffalo hides, and they shared stories through the oral tradition, with elders serving as the storytellers for younger generations. In modern times, many Lakota youth are not entirely fluent in their Native language, and English has become the everyday language on much of the reservation. But, the young people are still raised among a rich legacy of stories, some traditional and some more contemporary. Accordingly, Lakota youth are often adept listeners and have an intuitive sense of what makes a good story.

Their own stories spring from their multilayered identities. They are both young Lakota people, rooted in Native perspectives and ways, and regular kids navigating the present-day world. They might participate in traditional ceremonies, and they probably also surf the Internet. They may do beadwork or sing in Lakota, and like all students in school today, they write. And their writing includes all components of their identities to create a unique and poignant artistic tapestry."

2. The poetry collection was written by Lakota students in the fifth, sixth, seventh, and eighth grades at Red Cloud Indian School on the Pine Ridge Indian Reservation in South Dakota. Were there any specific guidelines to select which poems were published in this book?

Mr. McLaughlin: "The selection process was a long and meticulous one for me. I first read through all the students’ work and pulled out the strongest poems and statements. I then organized all these into thematic groupings and began to narrow the field, slowly and carefully building a total work that flowed well together as a book that honors and highlights each selection and conveys an overall story and message."

3. Since it appears that this is your first book published how did you manage to get the award-winning artist S. D. Nelson to illustrate Walking on Earth and Touching the Sky; Poetry and Prose?
Mr. McLaughlin: "Abrams Books has a working relationship with SD Nelson; they have published several of his illustrated books. When approached about serving as the illustrator for this anthology, Nelson enthusiastically accepted the offer. I invited the great Lakota author and actor Joseph Marshall to write the foreword for the book and he, also, agreed with excitement. The partnership of these two Lakota men is an important and powerful element of this project".

4. Do you teach these students at Red Cloud Indian School on the Pine Ridge Indian Reservation? If so what subject do you teach and what inspired you to get these children to publish their poetry. If not how did you get involved with these students?

Mr. McLaughlin:  "I taught at Red Cloud Indian School from 1997-2000. The book’s contents are from that time. I created the manuscript over ten years ago, refined it for my master’s thesis in 2003, and finally found the right publisher in Abrams last year! At Red Cloud, I taught Creative Writing classes and felt a responsibility to care for and reverence the expressions created in the classroom, which, to me, seemed both artistic and educational, both to youth (Native and otherwise) and to the larger public. The writings are centered in indigenous philosophies and reveal modern reservation realities, painting both the difficulty and beauty of life for young Native Americans."

5. What will draw children to read Walking on Earth and Touching the Sky; Poetry and Prose?

Mr. McLaughlin: "The stories in the book are real, raw, charged with energy, beautiful and brutal, and drawn from the wellsprings of the soul. Young people are fascinated with other young people as a window into their own identity. And when youth speak with conviction, as the students of the Walking on Earth and Touching the Sky book did, other youth are compelled to listen, as are people of all generations."

Sneak Peak
I was fortunate enough to have the publisher, Abrams Books for Young Readers, send me a copy of Walking on Earth and Touching the Sky: Poetry and Prose by Lakota Youth at Red Cloud Indian School. The book is absolutely amazing. The one poem that I selected to share with you it titled “To Be A Kid.” This poem had so much emotion in it that it gave me goose bumps so I wanted to share it.

Being a kid is like being in your own world and making your own decision. What happens to you when you’re a kid sticks with you in your future. Whatever you want to do is what you’re gonna do. Your parents can try to help you, but they can’t keep you locked up in a cage. When you’re a kid, you gotta be like a kid or be the way you want."
- Blue Dawn Little, p. 63

Sharing the Poem
This poem is deep, raw, and relates to most children today. No matter where children grow up they face these same types of hardships while growing up. Introducing this poem in a way that grabs the kid’s attention is the best way to help them fully wrap their minds around the meaning of this poem. I would write two words on a board: growing up. I would ask the children to brain storm how they feel about growing up. I would ask them if it is easy or hard; is there peer pressure; is family difficult? I would continue to pose these types of questions in order to really get them thinking about their lives. During this question/discussion time I would record their responses on the board in the form of thinking maps. Next, I would ask the children to use these graphic organizers to put their thoughts in writing after which we would voluntarily share with each other. After the writing/share session, I would read to them Blue Dawn Little’s poems from the book and then have a discussion comparing growing up on a reservation as opposed to not. I would solicit responses garnering what does or does not ring true in the poems. I would also encourage them to read more poems out of this book and compare their lives to the children’s on the reservation.

I had the pleasure of sitting next to Tim today at Sylvia's TLA session. Tim has such a soothing and inspiring performance voice. I told him that I felt like I was sitting in The Church of the Universe. He finished with a poem about a person's "Kingdom face" that made me happy because I envisioned my Kingdom face to have only ONE chin. As for my Kingdom body...I think a size 8 would be good...