Our 5Q Poet Interview series for National Poetry Month continues with TWO interviews with Douglas Florian since he has TWO new books out this year. Graduate student Dori Pruzan offers this first interview (plus) with Douglas.

Introduction:
Douglas Florian has lived all his life in New York City. He studied art at Queens College and the School of Visual Arts in New York. Florian was a cartoonist for the New Yorker but didn’t feel the environment suited him. He turned to the freedom of writing and illustrating children’s books. Initially, Florian began illustrating for other authors, but he was inspired to write his own after discovering a book of poetry at a flea market. Florian has written and illustrated over fifty books of children’s poetry. Although he experiments with rhyme and word play like other poets do, his poems and art offer a three-dimensional experience unlike any other. Florian’s illustrations often begin on brown paper bags primed with white gesso. He adds watercolor, gouache, colored pencils, or inks, then perhaps some tin foil, candy wrappers, shredded papers, stencils, and rubber stamps. The final result is a collage in which a reader may find words embedded. Florian’s unique abstract art has been on display in solo and group exhibitions around the northeast.

The initial page of his website, www.douglasflorian.com, displays thumbnail-sized images of several of his paintings. His blog, http://floriancafe.blogspot.com/, also shares his art and poetry. The following link is of a YouTube video of Florian reading Dinothesaurus. http://www.youtube.com/watch?v=FHo6xiXUC6g&noredirect=1 This link is to a great YouTube video of two students reading Florian’s poem "Soup." http://www.youtube.com/watch?v=IX3Jg3EC304 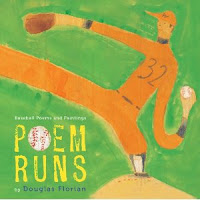 Reviews:
Florian’s Poem Runs is set to be released in April. Just as the title implies, this new book is all about the sport of baseball. According to a Kirkus review, “each verse focuses on one element of the game, from the baseball itself to position players and hitters. Even the umpire has his moment. The 15 verses vary in length from eight to 16 lines, and all have strong rhythms that beg to be read with a bouncing lilt.” The reviewer goes on to say that “Florian also plays with shapes and patterns of words… He creates some delightful phrases in Pitcher, who is ‘the starter of slumps,’ and ‘the strikeout collector.’” (Kirkus 2-1-2012). Although Florian’s art is just as engaging as ever, he added a little pine tar to his usual mix of gouache watercolors, oil pastels, colored pencils to lend a bit of authenticity to the “textured” illustrations. The reviewer felt this touch added “a childlike quality.” (Kirkus 2-1-2012).

A Publishers Weekly reviewer wrote: “Florian gives readers a tour of the baseball diamond, focusing mostly on the various positions on the field, in upbeat poems that exude a bravado and competitive spirit that’s perfect for the subject matter. Florian exaggerates the players’ physicality, as they bend, leap, and swing, their limbs stretching across the spreads.” (Publisher’s Weekly, April)

DP: I enjoy your art as much as your poetry. Which comes first-- the poem or the art?

DF: Usually the poem comes first, although sometimes a doodle or picture might trigger a poem. I may depart a bit from the poem in my painting or drawing, but the poem is the basic structure. Also for my nature books, such as zoo's who, there only 21 poems but I may create 40 or 50 poems before my editor and I decide what goes in and what gets left out. I do like to create art that can stand on its own, even though it is illustrating (bringing to light) the poem.

DP: As are most of your books, Poem Runs is based on a “factual” topic. I have noticed my students who are avid nonfiction readers gravitate to your poetry. Do you also prefer to read nonfiction?
DF: For my own pleasure, the only non-fiction I usually read is The New Yorker magazine. I gravitate to reading fiction such as Haruki Murakami, Mark Leyner, and Gabriel Garcia Marquez. Of course to research my poems involves a great deal of non-fiction reading.

DP: When you painted and wrote Poem Runs, how was it that you chose this topic and was it chosen specifically with children in mind?

DF: Over the years many students (usually boys) have asked me if I have ever written any books about sports, and I always had to say no. One day I was reading about my hapless Mets and I said why not a poetry book about baseball. I wanted the poems and pictures to have a Little League or sandlot quality, not pro-ball, which is a whole other ball game, so to speak. The voice was the voice of a child, or the child in me.

DP: What does Poem Runs reveal about you?

DF: Poem Runs is about my love of the game of baseball played for the sake of the game itself, without the stars and big salaries. By the way I was a little League shortstop and by sheer luck was usually on the championship team.

DP: Poem Runs is an artistic creation which focuses on the sport of baseball. How can your young readers connect the enjoyment of this sport to their personal creativity?

DF: I think what creative people can learn from baseball is to work hard to develop your craft and to never give up. Also you need a lot of confidence in both baseball and creativity.

Here's a sample poem from this collection (p.5) :

Sharing Poems Runs:
A fun way to introduce Poem Runs to students is to have pennants, peanuts and ball caps for students to enjoy while playing “Take Me Out To The Ballgame” before a reading began. After the poems have been read, students could try writing their own poem on a baseball or bat cutout or designing their own baseball cap.

Thanks for this great interview with Douglas--am really looking forward to hearing him read these new poems at TLA this month!

I loved your interview and am a big Doug Florian fan! Live with a baseball fanatic and teach kids. I also like how you gave teachers a nice way to "set the stage" to enjoy Doug's baseball book. A great teacher/kid-friendly tip! I think he has a special knack for finding the "write" words on so many topics.