I recently attended a conference in Bali that drew 125 teachers, professors, publishers, authors and others from Japan, Korea, Indonesia, India, Cambodia, Thailand, China, Australia, New Zealand and beyond.

It was a wonderful event and I met many people doing fascinating work often with very limited resources. I heard several interesting speakers-- on storytelling types, on the value of the trickster story for truth-telling, on the depiction of girls in Indonesian comics, on the importance of karma in eastern folktales, on the Korean diaspora, and so much more.  My own presentation was about poetry (of course):

The World in Verse: Multicultural Poetry for Young People

I began by highlighting some of the special benefits of poetry, in particular:
*Special succinctness of poetry in providing an introduction to other cultures
*Poets use the language, experiences, and images of their cultures
*Poets make powerful points about prejudice, identity, and cultural conflict
*Poems show children firsthand both the sameness and the differences across cultures

I shared a bibliography of poetry books and a paper which they had all already received, so I read actual POEMS to them-- and there was a spontaneous and positive reaction. (This was a conference with several storytellers and even a shadow puppet performance!) Since my time was short, I chose about a dozen poems to read aloud to convey the breadth of styles and topics represented in contemporary multicultural poetry. Here's a glimpse. 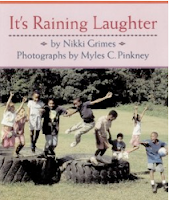 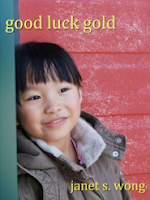 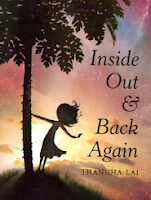 Asian Pacific American Poetry for Young People
Asian and Asian American poetry for young people is not just haiku; there are many lovely, ancient and contemporary works to share with children by poets such as Janet Wong and Linda Sue Park. Here is a sampling of poetry for young people by Asian and Asian American poets.
I read aloud:
“Speak Up”  by Janet Wong and “1975: Year of the Cat”  by Thanhha Lai, the beginning poem from Inside Out & Back Again 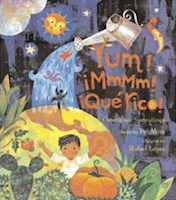 Hispanic/Latino/Latina Poetry for Young People
There are more and more poets of Hispanic/Latino background writing poetry for children. Some are of Hispanic heritage and others collect poetry from Latin American countries. Here are a few of my favorites for sharing with young people by poets such as Pat Mora, Gary Soto, Carmen T. Bernier-Grand, Guadalupe Garcia McCall and Margarita Engle.
I read aloud:
“Ode to Family Photographs”  by Gary Soto  and “Potato”  by Pat Mora and “Juan”  (one poem from The Poet Slave of Cuba) by Margarita Engle 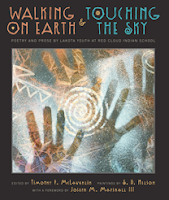 Native American Poetry For Young People
Voices from Native American or Indian tribes and traditions offer poetry in many forms. Here is a selection of these poetry books for young people.
I read aloud:
“I Rise, I Rise”  from an Osage prayer  before a young man’s first buffalo hunt, collected by Virginia Driving Hawk Sneve and "Who Am I?”(excerpt)  by Dusty Black Elk from Walking on Earth & Touching the Sky 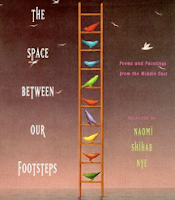 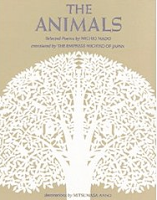 International Poetry for Young People
As we seek poetry for children from many cultural perspectives, we can expand beyond the cultures in the U.S. and include poetry from other countries by poets such as Graham Denton, Avis Harley, Monica Gunning, Carol-Ann Hoyte, JonArno Lawson, Holly Thompson (living in Japan) and Renee M. LaTulippe (living in Italy). Some of the following works are imported from across the oceans and others are anthologies of global poems collected by poets within the U.S. Sharing poems from these collections can put a face on a news story from far away lands.
I read aloud:
“The Bridge”  by the Lebanese poet, Kaissar Afif,  translated by Mansour Ajami from The Space Between Our Footsteps and “Sleep”  by Michio Mado from The Animals

One note-- most of the people at this conference made no distinction between multicultural and international literature, since many of the books they share are imported from other countries and their own indigenous publishing may be limited (particularly in English). It's all just "literature" to them without the VOLUME of books we have in the U.S. and the distinctions that we make in authorship and culture.

I also made some practical connections, talking about "Poetry Friday" and the "Take 5" strategies that we introduced in The Poetry Friday Anthology.

Take 5: Strategies for Poetry Sharing
#1: Read the poem aloud (vary your approach in multiple readings).
#2: Read the poem aloud again with student participation and involvement.
#3: Take a moment to invite students to discuss the poem; have an open-ended question ready as a prompt.
#4: Make a subtle skill connection with the poem—just one.
#5: Connect with other poems and poetry books that are similar in some way.

I ended with two sample poems from The Poetry Friday Anthology, showing how "multicultural poets" can express both culturally specific as well as universally understood themes and subjects:
I shared  “Grandfather’s Chopsticks”  by Janet Wong  as well as “The Do Kind” also  by Janet Wong.

I concluded by emphasizing how contemporary poets of color produce poetry that:
*Is both individual and universal, about childhood and about culture
*Captures themes of identity, society, heritage, power, wisdom
*Uses a variety of elements from memoir, facts, repetition, slang, rhyme to free verse

The session was well received and I was so pleased at the enthusiastic response to HEARING poems (although why should I be surprised?)! I spoke with several people afterward-- people who want to go home and promote poetry alongside storytelling (which is a bigger emphasis), people who want to encourage indigenous poets in their home countries, and even a middle school teacher in Bali who wants to introduce poetry jams and slams! So fun to make these poetry connections!

One of my fabulous former students is Carol Neeland, a teacher at the American School of the Hague (in the Netherlands). She is doing really creative things with kids incorporating technology in promoting and responding to poetry-- she calls it "green screen poetry." I've shared some of their gems before and have permission to do so once again. Here are very clever poem movies that her students created for two poems by Shel Silverstein.

"Crazy Dream" was created by 6th graders Amanda and Anna and it features some special guest stars:

Amanda and Anna's interpretation of poem gave them the "power" to make the Superintendent and Principal stand on their heads and to send their teachers to outer Mongolia!


"Ickle Me, Pickle Me, Tickle Me, too" was created by Kevin and Jakob, but they needed someone to play Tickle Me, so Jin joined them as well. They used Photoshop to create the flying shoe and then used green screen to put themselves inside of it. Don't they make flying in a shoe look like fun?

This was all part of their big Mo Po celebration for National Poetry Month. (Mo as in "MORE" and Po as in "Poetry!") Way to go, Carol! And thank you for sharing their work with us. Keep the MoPoMomentum going!

The poetry of shoes

I'm currently in Bali (yes, THAT Bali) for the IBBY Asia Oceana Congress to talk about poetry, what else?  (More on my presentation, "The World in Verse," later.) But first, I've done a bit of touring and ran across this and I had to share! 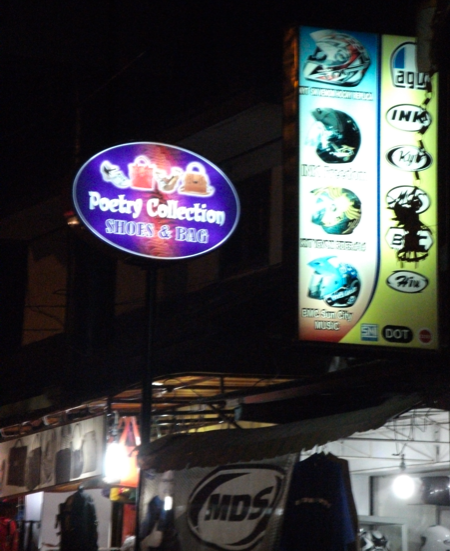 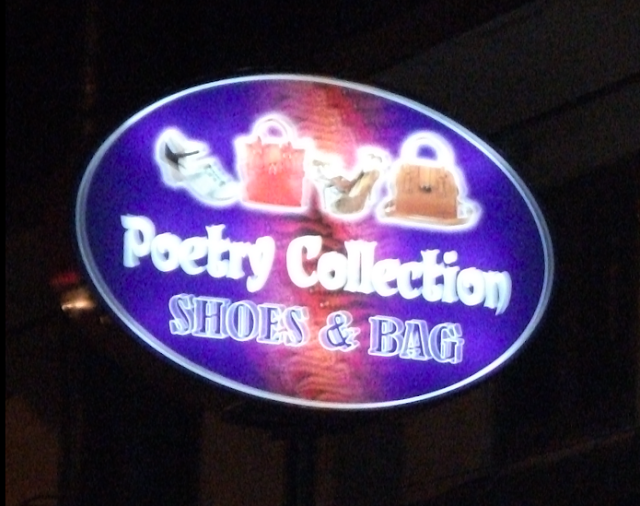 Since I am a shoe lover (although I just can't manage the way-high heels I wore in my "youth"), I get  that shoes and bags do have their own kind of poetry! Don't you agree?


(Also, my apologies for being AWOL. Bali is blocking Gmail and Blogger, but I stumbled upon a "back-door" today, which will probably slam shut any moment! If not, I'll post more nuggets soon...)
Posted by Sylvia Vardell at 10:52 PM 4 comments:

9th Annual Poetry Round Up at TLA

This time last week, I was lucky enough to host the 9th annual Poetry Round Up at the Texas Library Association conference in Fort Worth.  What an amazing lineup of poets and what a great audience. For those of you who couldn't join us, here are a few video clips to share the magic!


SELECTED BOOKS BY 2013 ROUND UP POETS

Special thanks to these publishers and their wonderful representatives: Penguin Books for Young Readers and Laura Antonacci, and Boyds Mills Press and Kerry McManus.


Thanks to the poets who spoke so eloquently and each stayed for the entire 4 hour institute. Thanks to Penguin and Boyds Mills Press for bringing several of our poets. Thanks to our lovely audience who were so committed, open, and enthusiastic. And special thanks to Dr. Marianne Follis, Chair of the Children's Round Table (of the Texas Library Association) for conceiving of P*CON (the poetry version of Comic Con!) and for all her support. This was TLA's FIRST post-conference institute and I think it was a big hit! One participant said it was the highlight of her entire conference experience!