I can't believe January is almost over, can you? Now that I've gathered my list of forthcoming poetry for young people this year, I'm working on getting my hands on the actual BOOKS! Hope to post more about them, the poets, and poetry news soon. Meanwhile, I thought it might be fun to stop and celebrate the upcoming Groundhog Day (I love that Bill Murray movie). So, here we go. The lovely, talented Jane Yolen wrote a poem specifically for Groundhog Day especially for our Poetry Friday for Celebrations. 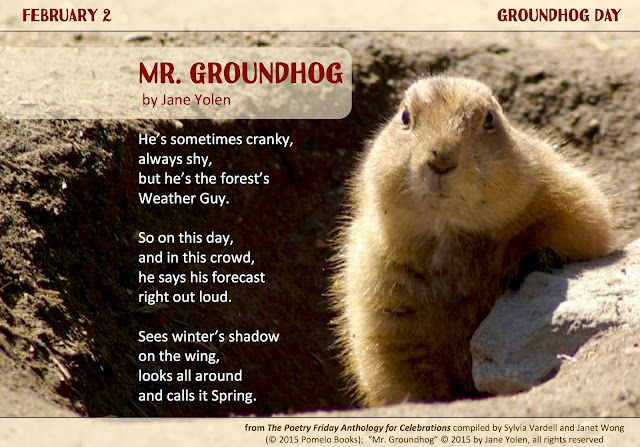 And here are the Take 5 activities from the Celebrations anthology for sharing Jane's Groundhog Day poem. 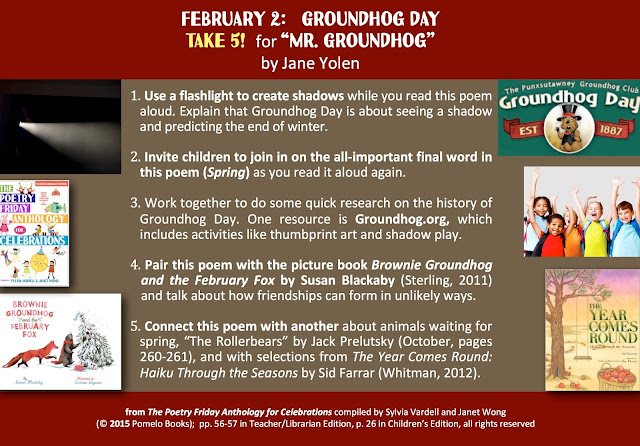 You'll also find these two "poem postcards" at Pinterest here, along with hundreds of other poems in digital postcard form to share with young people.

Now I'm guessing that winter will be hanging around a bit longer, although our temps in Texas keep going up and down-- mostly up. But, when you're ready to think about spring, here's a list of poetry books all about spring (from my Poetry Teacher's Book of Lists). 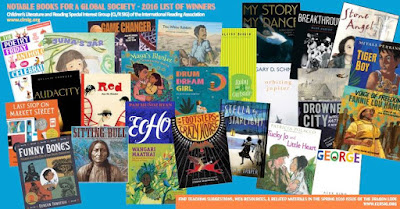 NBGS List 2016
We're also so pleased to announce that The Poetry Friday Anthology for Celebrations was chosen for the 2016 list of Notable Books for a Global Society by the International Literacy Association! In fact, there were several books of poetry featured on their 2016 list, including: Drum Dream Girl by Margarita Engle, Voice of Freedom: Fannie Lou Hamer by Carole Boston Weatherford, and Audacity by Melanie Crowder. For the complete list, click here.

***Now head on over to Reading to the Core where Catherine is hosting Poetry Friday. 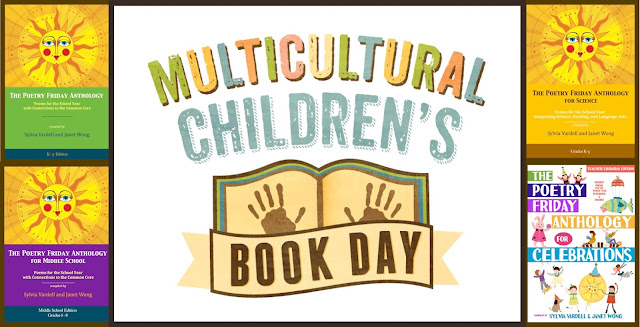 It's time to celebrate Multicultural Children's Book Day. This is a celebration of diversity in literature for young people launched by children’s reading and play advocates Valarie Budayr from Jump Into a Book and Mia Wenjen from Pragmatic Mom. You can find tons of links to many multicultural blog posts at their blogs too. At Pomelo Books, Janet (Wong) and I are so pleased to be sponsors of this great celebration. In fact, we're so pleased that diversity has been a hallmark of each of our Poetry Friday anthologies. We've featured diverse poets, diverse themes and topics, and even bilingual poetry in Spanish/English.

This week, Janet is presenting along with poets Julie Larios, Charles Waters, and Carmen T. Bernier-Grand at Dearborn Park Elementary School in Seattle, a Title I school that educates children who are Asian American, African American, and Latino. Children even learn Mandarin or Spanish starting in kindergarten!

I'm featuring poems by each of these lovely peeps today to celebrate Multicultural Children's Book Day (officially January 27). Join the Twitter Party on Jan. 27 at 8pm with #ReadYourWorld. There will be great conversation and lots of giveaways too!

Have you ever heard Charles Waters present? He's a hoot, a ham, and a force! This poem by him is from The Poetry Friday Anthology for Celebrations and is perfect for launching a celebration of Black History Month in February-- plus he has many other poems celebrating African Americans to use any time of the year! 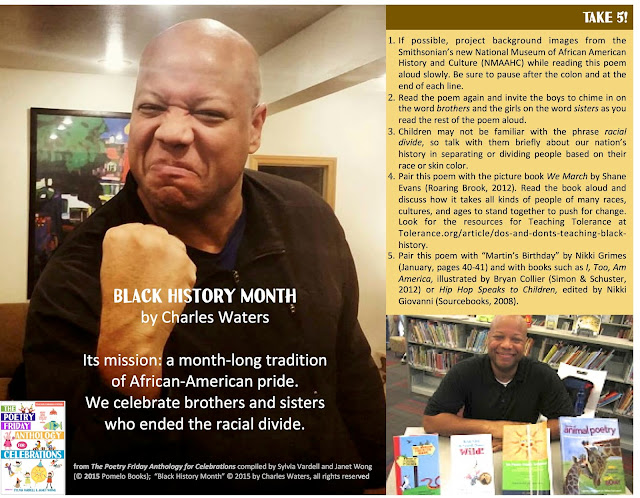 Are you familiar with the work of Carmen T. Bernier-Grand? I just love her poem biographies. This featured poem below is a bilingual (Spanish/English) poem from our science anthology, The Poetry Friday Anthology for Science, as well as the student edition, The Poetry of Science. I just love the Spanish title "Compu-nerdo," don't you? 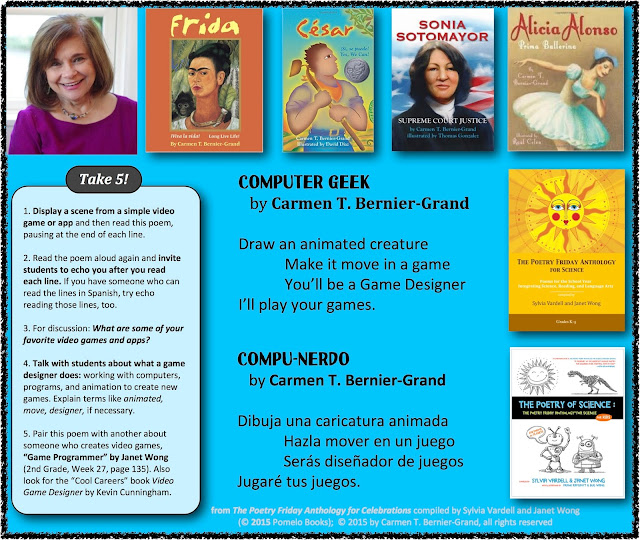 Julie Larios is the lovely lady behind the poetry of Yellow Elephant and Imaginary Menagerie, among others. Plus her blog, The Drift Record, is not-to-be-missed. Her lyrical poem, "Names" (below) from The Poetry Friday Anthology for Middle School makes my mouth water! 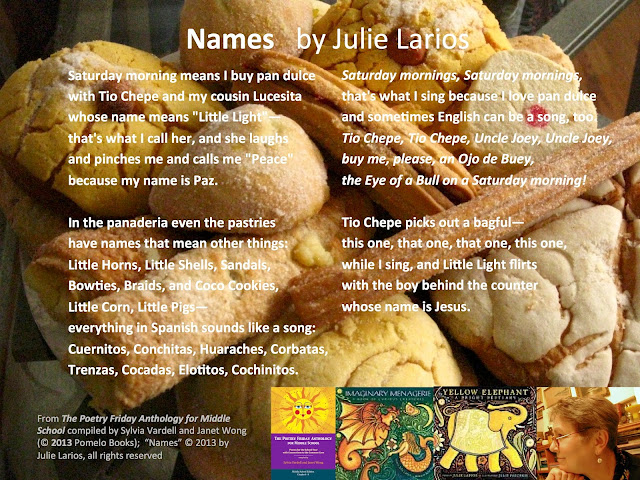 Finally, you know how much I love Janet (Wong), her poetry, and her endless advocacy for diversity AND poetry. Her poem below, "Grandfather's Chopsticks" is from our first book together, The Poetry Friday Anthology K-5. 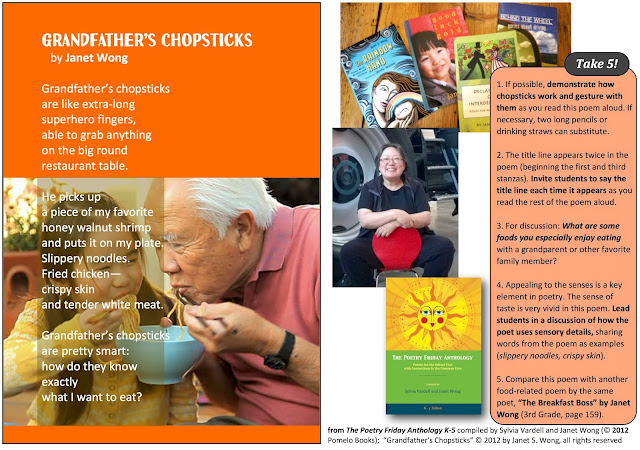 Remember to check out all the resources at Multicultural Children's Book Day and join the Twitter gathering, too. It's so great to see diversity celebrated so widely by so many. Don't miss the party! 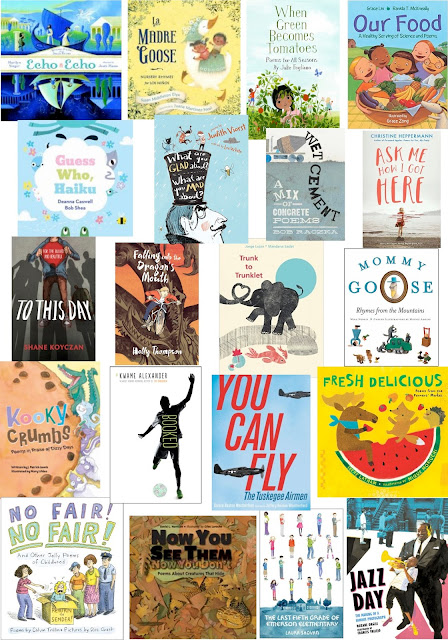 It's time again to post my annual "sneak peek" list of all the poetry for young people that will be published in the coming year (that I know about, thus far). This includes poetry collections,  anthologies and novels in verse. I talked with publishers at the ALA Midwinter conference, attended previews, combed publisher websites, looked for forthcoming titles at Books in Print, and made notes based on PW Children's Bookshelf and other venues, and this is what I know so far. If you know about other poetry for young readers set to be published this year (or have changes to suggest about these titles below), please let me know (in the comments). I'll be updating this list all year long, so it becomes a resource as you look for the latest poetry books for young people. There's a quick link to this post in the menu on the right-hand side of this blog, too. As always, I'm so excited to find, get, and read all of these books! Congrats poets and yay for poetry readers!
(P.S. Within minutes I already made revisions, thanks to Laura Shovan's post at Michelle Heidenrich Barnes's blog, Today's Little Ditty!) BTW, this list includes books that have SOME poetry, but may not be entirely poetry. And I'll keep updating this list as I hear of new titles to add.


Rhyming/Poem Picture Books
Since posting my original list, I've discovered that some of these titles are rhyming picture books-- also lovely-- but I'm trying to focus specifically on poetry titles (including novels in verse). So, I'm starting a separate list below of poets' rhyming picture books. If someone else is already keeping such a list, please let me know and I can direct people there.
Meanwhile, head over to Tara's blog, A Teaching Life, to see what else is going on this Poetry Friday!
Posted by Sylvia Vardell at 7:39 AM 16 comments:

Poetry at the YMA

Just a week ago I was in Boston for the midwinter conference of the American Library Association. I was lucky enough to co-chair the Morris Seminar alongside the amazing Deb Taylor and we had a great day spent with a dozen leaders in our field engaging 32 participants (new-ish librarians) in talking about children's literature in deep, thoughtful ways. Of course, I started the day by sharing a poem with the group! Then on Monday, I attended the YMA (youth media awards) press conference where all the major ALA (ALSC, and YALSA) awards were announced. Such an exciting time for a book nerd like me! There were so many wonderful surprises among the awards, but I am always looking for any and all POETRY books that are getting recognized in this way. So, here's the round up of the poetry titles that received ALA awards this year. 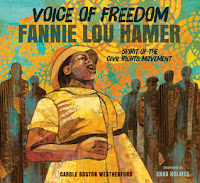 Hurray for author and poet Carole Boston Weatherford and illustrator Ekua Holmes for Voice of Freedom: Fannie Lou Hamer, Spirit of the Civil Rights Movement, published by Candlewick Press. It received HEAPS of lovely recognition-- for the art and for the informative poetic content! It won:
There's a great blog post at A Rep Reading about the book here. 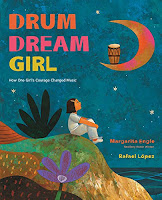 Interestingly, it also was selected as a Picture Book Honor book for the Asian/Pacific American Award for Literature (APALA) because this story is based upon the childhood of Millo Castro Zaldarriaga, a Chinese-African-Cuban girl who challenged Cuba's traditional taboo against female drummers.

You can read more about this beautiful book at Latinos in Kid Lit here and at Rhapsody in Books here.

Kudos to author and poet Marilyn Hilton for receiving the Asian/Pacific American Award for Literature (APALA) in the "Children’s" category for her novel in verse, Full Cicada Moon published by Dial Books/Penguin Random House.

You can find an interview with Marilyn Hilton over at The Hiding Spot here.

Finally, Jacqueline Woodson was chosen to deliver the 2017 May Hill Arbuthnot Honor Lecture. The May Hill Arbuthnot Honor Lecture Award recognizes an author, critic, librarian, historian or teacher of children’s literature, who then presents a lecture at a winning host site. Jacqueline Woodson is the 2014 National Book Award winner for her New York Times bestselling memoir, Brown Girl Dreaming. The author of more than two dozen books for young readers, she is a four-time Newbery Honor winner, a recipient of the NAACP Image Award, a two-time Coretta Scott King Award winner and was recently named the Young People’s Poet Laureate by the Poetry Foundation.

Congratulations to each of these authors, poets, and illustrators for these wonderful books and worthy awards. These are some of MY favorite poetry books of the year, too and I'm so glad to see these poetry contributions receive additional recognition. You may also notice that each of these books also reflects the distinctive experiences and rich language that comes from diverse authors and stories. In addition, these works won "multicultural" awards as well as awards for art and text given across the spectrum. I've said it before and I'll say it again (over and over), some of the best poetry being published for young people today reflects the beautiful diversity of our nation and the awards that target diverse literature are often the first ones to recognize poetry specifically. That's also something to celebrate! I would even argue that this year's Newbery winner (a picture book!), Last Stop on Market Street written by Matt de la Peña and illustrated by Christian Robinson, is also VERY poetic in it's use of language!

Now head on over to Keri Recommends for more poetry goodness on this Poetry Friday!