I thought I’d take a moment to share a pile of miscellaneous poetry news that I’ve collected recently. Just FYI…

***Paul Kelsey has created Launch Pad, an online publishing venue for young people. He writes, “We publish works selectively from young authors, and then invite young artists to illustrate our stories and poems.”

***Check out Steven Withrow’s The Feather of Memory, his first experiment in writing a short novel in verse for young adults at his blog, Crackles of Speech. He bills this work as “a time-travel science-fantasy adventure for young adults told in blank verse.” He notes that “the main narrative is written in blank verse -- unrhymed iambic pentameter -- and each installment includes an audio file of me reading the poem aloud.”

***Singer Natalie Merchant’s new album, Leave Your Sleep pairs lyrics from near-forgotten 19th-century poetry with evocative melodies delivered in her unmistakable voice. Check out a clip of her performing here. In a similar vein, folk musician Kris Delmhorst took various works from well known poets and put them to music (some of them altered slightly).

***GPR Records released Poetic License, a three-CD set that features 100 poems performed by 100 famous names. (The disc is also available on Amazon and iTunes.) Each star picked a favorite poem to read on the spoken-word compilation, including Lewis Carroll’s “The Walrus and the Carpenter” (Jason Alexander), Henry Wadsworth Longfellow’s “The Day Is Done” (Florence Henderson), Emily Dickinson’s “Because I Could Not Stop for Death” (Kate Mulgrew), and Edward Field’s “New Yorkers” (Paige Davis). Here’s a clip of Cynthia Nixon reading “Vespers” by A.A. Milne.

***HarperCollins Children's Books has announced the fall 2011 release of a collection of never-before published Shel Silverstein poems and illustrations. Not yet titled, the book will share the same format as the late author's previous poetry collections, Where the Sidewalk Ends, A Light in the Attic, and Falling Up. Senior executive editor Antonia Markiet is currently working with Silverstein's family to select poetry and artwork for the new collection, which she says "will contain between 120 and 130 poems, in line with Shel's previous three poetry collections."

If you’re planning to attend the annual conference of the American Library Association next month in Washington D.C., please allow me to plug my poetry session scheduled for the conference. It’s entitled, “Celebrating The Spoken Word with Poetry for Young People” and is scheduled for Sunday, June 27 at 10:30am-12:00pm.

We’ll be featuring Mary Ann Hoberman, Children’s Poet Laureate, talking about her life, work, and the creative process. Also on the panel will be Stephen Young, Program Director of the Poetry Foundation's Poetry Out Loud National Recitation Contest for high school students.

this year’s Poetry Out Loud contest winner, Amber Rose Johnson, will be appearing too, and I am tickled pink to have a young person—and poetry performer—on the docket, too. I don’t know the location for our session yet, but if you’re in town, I hope you can come. [Check out the complete conference program here.]

And of course, I’ll be r

eporting on the annual ALSC Poetry Blast scheduled for June 28 at 5:30 in Washington Convention Center, Room 144 A-C. Hosts Marilyn Singer and Barbara Genco are introducing another amazing line up of poets for the Blast, including Arnold Adoff, Calef Brown, Lois Ehlert, Lee Bennett Hopkins, Debbie Levy, George Ella Lyon, Tony Medina, Heidi Mordhorst, Marilyn Nelson, Marilyn Singer, and Carole Boston Weatherford. Won’t that be a wonderful evening? It’s one of the highlights of the conference, in my opinion, and I never miss this “concert” of poets reading from their works. Join their “Fans of the ALSC Poetry Blast” page on Facebook, too.

A new poetry calendar coming in 2011 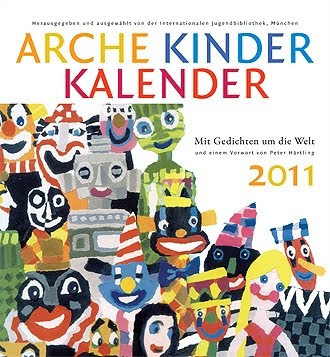 One of the things I gleaned from attending this year’s Bologna Children’s Book Fair in March was the news about a new “poetry calendar for children” coming out for 2011. It’s being produced by a German publisher and you’ll find more info (in German) here. Dr. Christiane Raabe told me about it—she is the Director of the International Youth Library in Munich and I have written about that amazing library before. They hosted a fantastic poetry symposium last summer (that I attended and wrote about) and one of their exhibits featured children’s books of poetry from around the world. Well, that exhibit has now been transformed into a gorgeous week-by-week calendar for 2011.

Here’s the informational paragraph I picked up in Bologna, “Children between 4 and 9 years can travel around the world week after week with 53 wonderful, witty, funny, serious and mostly rhymed poems from all over the world. The illustrated texts have been chosen carefully by the International Youth Library, Munich. They come from 30 countries such as Italy, England, Canada, USA, South America, Spain, Portugal, Greece, Turkey, Iran, Japan, Russia, Lithuania, Poland, Croatia, Czechoslovakia, the Netherlands, France, Denmark, Norway, or Germany. Every page shows the original illustration and the original poem plus the translation into the German language by well known translators. The calendar will be published in July by Arche Kalender Verlag, Zurich-Hamburg."

I had the chance to look at a partial proof copy and it’s just gorgeous! Rich color on every page and a wonderful assortment of world poetry—many poems in English. Wouldn’t it be fun to have this calendar in your school or library and see if you could find translators for the non-English poems among your circle of patrons, community members, students, families, and friends?

Join the rest of the Poetry Friday circle this week at Alphabet Soup hosted by Jama Rattigan.

P.S. My Mom (Ingrid) is finally doing better. Thanks so much for the support!

Image credit: http://arche-kalender-verlag.com/4-0-Arche-Kinder-Kalender.html
Posted by Sylvia Vardell at 8:30 AM 3 comments: 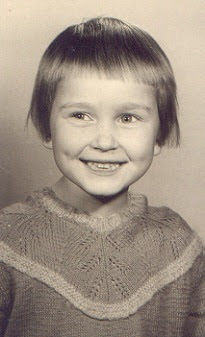 I may have mentioned before that my first language was German and my parents immigrated to the U.S. when I was a baby. My first books were collections of German fairy tales and nursery rhymes. One of my first “literary” memories is finding a poem in one of those books, memorizing it, and performing it for my parents for a special birthday. So, in honor of Mother’s Day, I decided to see if I could resurrect that gem. I can’t seem to find the book itself now, but this is the poem, as best as I can remember it (or spell it in German).

Just saying that poem out loud makes me feel 8 years old again!   Here’s a close approximation in English (although not nearly as rhythmic and musical):

If Father or Mother have a birthday
What should I say? What gift should I give?
I’m only a little, young life
I have a heart that thinks and speaks
I love you so much, that’s all I know.

I realized recently that the roots for my obsession with poetry are buried deep. For me, poetry was part of the music of learning English, too. It was the rhyme and rhythm of Mother Goose and playground chants in English that helped me learn to speak—and then read—my new language. Something to keep in mind when we think non-English speakers can’t “handle” poetry til they are fluent in English.

Happy Mother’s Day to all the moms out there. My own Mom is in the hospital having a difficult recovery after two surgeries. I’ve been worried crazy about her, but I think she’s slowly mending. If you’re a praying person, please add “Ingrid” to your list. Thanks!

Image credit: me as a kindergartener in Germany!