I’m in Santiago de Compostela, Spain, for the 32nd annual Congress of the International Board on Books for Young People. This event is held biennially and rotates around the globe, most previously held in Copenhagen (2008) and Macau (2006). I’m attending as co-editor of Bookbird, the journal of IBBY, along with 600+ registrants from 72 member countries gathering for multiple sessions, including the presentation of the Hans Christian Andersen awards and announcement of the IBBY Honour List.

The IBBY Honour List is a biennial selection of outstanding, recently published books, honoring writers, illustrators and translators from IBBY member countries around the world. The first Honour List in 1956 was a selection of 15 entries from 12 countries. For the 2010 Honour List, 54 countries have sent 164 nominations in 44 different languages—with a total of 64 entries in the category of “writing,” 52 in the category of “illustration,” and 48 in the category of “translation.” This list provides a “welcome opportunity to study and review the production of children’s books” around the world—the best each country has to offer an international audience.

Of these 164 books worldwide, 8 were works of poetry (5 honored for writing and 3 for illustration). The books are on display at the conference and we each receive a booklet detailing the particulars of each book. Here is the lowdown on 8 unique poetry books from around the world (with annotations from the booklet)—at least one of which is available in English.

As part of the celebrations of the author’s 100th anniversary these series of poems and folk tales about nature and social injustices were published especially for children. The tone is soft without sadness or harsh feelings. The texts are historical in the sense that they were written while the author was in jail under the dictatorship and were written for his son who was only five at the time A lot of the poems are allegoric and are very relevant to children.

This collection of 40 poems on the theme of dreams encompasses an interesting range of voices guaranteed to bring a fresh perspective to the ordinary. A mouse dreams of sprouting wings to swoop like a bird-of-prey on its enemy like the cat, while a dinosaur skeleton in the natural history museum imagines falling in love and fathering the first dinosaur babies in sixty-five million years. A school trip to Mars, a library in which characters are dislodged from their books and a flirtation between the sun and a grey cloud, are just some of the surprising happenings in this vibrant collection. The poems are rhythmic, the imagery vivid and the language musical. While each poem is a gem in itself, the themes are beautifully developed in the collection as a whole.

One whole year of poetry: four seasons pulse with the beat of verses and landscapes of land and soul, experience and mood. Verses and images; figures, colours and sounds, form a symbolically rich and delicate map of the passage of time. Searching for the internal beauty of things, the words and pictures invite the reader on a journey through the forms, observations and feelings of the secret life of being.

The old rhymes and sayings of the vendors who sold their wares throughout the streets of Mexico up to the last century are recreated in this book of poems. The author takes a humorous journey through popular forms of poetry and invents word games, riddles, songs, recreating the proverbs that grandparents often repeated. Through these poems and rhymes children can learn what the past generations have talked about and this helps to keep alive the vast oral tradition of Mexico. The book is complemented by comic illustrations by Josel that reproduce older images with touches of humor.

John inherits a luck-bringing little dragon called Fu from his grandfather. John writes about all kind of adventures—real and imaginary—that he had with his grandfather before he died. In prose he tells about the story of the dragon Fu, who, at the end, is set free. The adventures with his grandfather are written as poetry. One of them is about when they fought against the big seven-headed dragon! The poems are accompanied by attractive and moving black-and-white humorous illustrations. The friendship with his grandfather and the great loss John feels form the thread of the book. They observations and the memories are written in a beautiful literary language and are recognizable for anyone who has lost someone he or she has loved very much.

This is a book of poems that has a strong connection between sounds, rhythm, haikus and illustration. A haiku is a three-line poem made from two lines of five syllables and the middle one of seven. It is the synthesis between each poem and the uncomplicated drawings by the illustrator that results in a profound connection between the two components of the book. The techniques used are combined with great importance given to handmade paper, enabling readers to see and feel its textures. The illustrator regards the form and colour for each haiku to be minimalist, at the same time they communicate perfectly the rhythm and meaning of the poems to the reader. 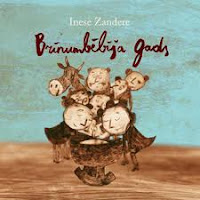 This book is a 22-poem cycle telling the story of a family with a new addition—a newborn baby. It is a chronicle of the events of the first year of its life and their place within the context of family, nation, nature, the course of seasons, language and traditions. The red thread of the cycle—the tiny baby—is also the key to awareness of family togetherness. The illustrations enhance the imagery of the poems and extend the boundaries of the written text. The artists has created a magical world of anthropomorphic beings that, nevertheless, is ruled by the universal order of thing and human relationships on which a child can safely rely.

This bilingual (Slovene-English) volume of poetry by Tone Pavček was published to present one of the most prominent of contemporary Slovene poets to readers worldwide. The selection in this collection offers the poet’s best works, which are mostly poems for children and young readers, but also some poems for adult readers. In the foreword, Pavček has given an informative portrait of himself and his work. The illustrator has given the poems unique and surrealistic, sometimes almost dream-like images. The colours of his double-page illustrations, which delineate the collection, together with the vignettes in sepia, breathe a touch of the old and a lyricism. The illustrator is characterized by his use of various artistic means of expression.

NOTE:
BTW, I was honored to serve on the US committee for the IBBY Honour List recommendation and we chose We Are the Ship by Kadir Nelson for illustration, The Wednesday Wars by Gary D. Schmidt for writing, and Garmann’s Summer written by Stian Hole (Norway) and translated by Don Bartlett in the translation category.