Janet S. Wong was born on September 30, 1962, and grew up in California, the child of Korean and Chinese immigrants. She graduated from UCLA with a bachelor’s degree in History and then obtained her law degree from Yale. However, she was not happy practicing law and decided to make a change, focusing on writing for young people instead. She has since authored nearly two dozen picture books and poetry collections. Her poems have been featured in some unusual venues, including a car-talk radio show, on 5,000 subway and bus posters as part of the New York City Metropolitan Transit Authority's "Poetry in Motion" program, and on the “Oprah” television show. She and her books have received numerous awards and honors, such as the International Reading Association's "Celebrate Literacy Award" for exemplary service in the promotion of literacy.

Janet Wong’s first two poetry collections, Good Luck Gold and Other Poems (Simon & Schuster, 1994) and A Suitcase of Seaweed, and Other Poems (Simon & Schuster, 1996) focus on her own background, exploring cultural connections and growing up with Korean and Chinese traditions. Many of the poems in these two collections lend themselves to poetry performance. For example, try "Face It" (A Suitcase Of Seaweed) with three stanzas that reflect the writer’s musings on her nose, her eyes, and her mouth and how each represents a different part of her identity. Three groups could each read a different stanza, using motions to point to each body part in turn.

Face It
by Janet Wong

My nose belongs
to Guangdong, China--
short and round, a Jang family nose.

My eyes belong
to Alsace, France--
wide like Grandmother Hemmerling's.

But my mouth, my big-talking mouth, belongs
to me, alone.

Wong also has authored several poetry collections on a variety of other topics. Behind the Wheel: Poems About Driving (Simon & Schuster, 1999) is a wonderful gift for the teenager who is learning to drive. The Rainbow Hand: Poems About Mothers and Children (Simon & Schuster, 2000) is an homage to mothers and our relationships with them and includes perfect “Mother’s Day” poem tributes. Wong has two collections of poems that address children's curiosity about dreams and superstitions with Night Garden: Poems from the World of Dreams (Simon & Schuster, 2000) and Knock on Wood: Poems about Superstitions (Simon & Schuster, 2003). Both are beautifully illustrated by Julie Paschkis and invite children to express their own beliefs and concerns-- perhaps poetically. Wong and Paschkis also teamed up for a third illustrated poetry collection this year, Twist, Yoga Poems (Simon & Schuster, 2007), which School Library Journal called “lovely to listen to and to look at.” For more information about Wong and her work, check out Poetry People.

Janet is a dynamic personality, a frequent presenter, and an advocate and mentor for many other authors, poets, and illustrators. I’m a big fan, as you can tell by many of my previous postings, including:
Tuesday, March 20, 2007 about her online chat with kids and her new photo-autobiography, When It Wriggles Away.
Tuesday, August 29, 2006 about the first anniversary of Hurricane Katrina and her poem about it, “Coin Drive.”
Happy birthday, Janet!

Thanks to AmoxCalli for hosting the Poetry Friday Roundup this week.

Posted by Sylvia Vardell at 7:12 AM 7 comments: Links to this post

I had the opportunity to meet the talented and effervescent author and illustrator Grace Lin this spring when we were on a panel together at the Texas Library Association conference. Her husband, Robert Mercer, was desperately ill and sadly passed away a month ago at the too-young age of 35. My good friend Nancy also lost her husband to cancer this summer. Grief has been weighing on many I care about recently, so I sought a poem for solace, of course.

I would also like to join in the promotion of Robert’s Snow: For Cancer’s Cure, the fundraising effort that Grace initiated several years ago. From the Web site: “Own a piece of art from your favorite children's book illustrator while helping to fight cancer” by buying an original snowflake ornament created by children’s book illustrators. “Since 2004, this online auction has raised over $200,000 for Dana-Farber, and with your help, we can continue this holiday tradition in 2007.” The auction begins in November. And for more information about Robert himself, check out the Blue Rose Girls blog.

Picture credit: http://bluerosegirls.blogspot.com/
Posted by Sylvia Vardell at 9:44 AM 7 comments: Links to this post 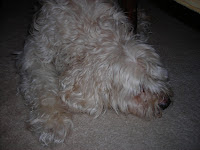 Hey, poetry lovers, check out the Poetry Friday round up at HipWriterMama's!
Posted by Sylvia Vardell at 9:09 AM 4 comments: Links to this post

Tomorrow is Jack Prelutsky’s birthday, so I’d like to send him a happy shout out and celebrate his life and work with a brief post.

He was born on September 8, 1940, in Brooklyn, New York. He attended Hunter College in Manhattan and worked as an opera singer, folk singer, truckdriver, photographer, plumber’s assistant, piano mover, cab driver, standup comedian, and more. He is married and lives in Seattle. He enjoys photography, carpentry, and creating games and "found object" sculpture and collages. He collects frog miniatures, art, and children’s poetry books of which he has over 5000.

Prelutsky has garnered many awards in his long career including citations as: New York Times Outstanding Book of the Year, School Library Journal Best of the Best Book, International Reading Association/Children's Book Council Children's Choice, Library of Congress Book of the Year, Parents' Choice Award, American Library Association Notable Children's Recording, an Association for Library Services to Children Notable Book and Booklist Editor's Choice, among others. In 2006, he was honored as the first Children’s Poet Laureate by the national Poetry Foundation which included a $25,000 prize. His combined works have sold over a million copies and been translated into many languages.

Jack Prelutsky is a prolific writer, with many collections of poetry to his credit, including enormously popular anthologies he has compiled of other poets’ works, such as The Random House Book of Poetry for Children (Random House 1983), Read-aloud Rhymes for the Very Young (Knopf 1986), The Beauty of the Beast (Knopf 1997), and The 20th Century Children's Poetry Treasury (Knopf 1999). In addition, there are many collections of his own popular poetry available including books organized around topics such as Tyrannosaurus was a Beast: Dinosaur Poems (Mulberry 1993) and The Dragons are Singing Tonight (HarperTrophy 1998). His holiday poems are also very appealing: It’s Halloween (HarperTrophy 1996), It’s Christmas (HarperTrophy 1995), It’s Thanksgiving (HarperTrophy 1996), and It’s Valentine’s Day (HarperTrophy 1996), also available in one single audio anthology from HarperChildrensAudio (2005). And for younger children, he created a kind of “American Mother Goose” with nursery rhymes that reference cities and places in the United States, rather than European sites such as “London Bridge” or “Banbury Cross” in his collections, Ride a Purple Pelican (Greenwillow 1986) and Beneath a Blue Umbrella (Greenwillow 1990).

Jack Prelutsky became established as a poetic dynamo with the publication of The New Kid on the Block in 1984, his best-selling collection of 100+ poems illustrated by cartoonist James Stevenson with understated comic genius on every page. With poems that are nearly childhood standards now, like “Homework! Oh, Homework!” and “Bleezer’s Ice Cream,” the music of Prelutsky’s verse is irresistible. Since the publication of New Kid, he rivals Shel Silverstein for name recognition in the field of children’s poetry. Equally popular companion books followed, including Something Big Has Been Here (1990), A Pizza the Size of the Sun (1996), and It’s Raining Pigs & Noodles (2000). A fifth installment is slated for publication in 2008: My Dog May Be a Genius.

Many of Prelutsky’s poems lend themselves to choral reading and poem performance in a variety of ways. For example, his poems with repeated lines or refrains provide a natural opportunity for group participation on the refrain. One of my favorite strategies for performing Prelutsky’s poetry is singing. Count the beats in the first line or two of the poem; then count the beats in the first line or two of the song to see if they match. Many of Jack Prelutsky’s poems, in particular, match song tunes, which may not be surprising when one remembers he was a singer and musician before turning to poetry. Try his poem “Allosaurus” (from Tyrannosaurus was a Beast: Dinosaur Poems), a poem describing the ferocious qualities of this dinosaur sung to the tune of “Row, Row, Row Your Boat.” It’s a hilarious juxtaposition of lyrics and tune. Challenge the children to match other of his dinosaur poems to song tunes.

Allosaurus liked to bite,
its teeth were sharp as sabers,
it frequently, with great delight,
made mincemeat of its neighbors.

Allosaurus liked to hunt,
and when it caught its quarry,
it tore it open, back and front,
and never said, “I’m sorry!”

Allosaurus liked to eat,
and using teeth and talons,
it stuffed itself with tons of meat,
and guzzled blood by gallons.

Allosaurus liked to munch,
and kept from growing thinner
by gnawing an enormous lunch,
then rushing off to dinner.

From Tyrannosaurus Was a Beast
[Sung to the tune of “Row, row, row your boat”]

For more about Jack, his life, and his work, check out his new web site and look for Poetry People; A Practical Guide to Children's Poets (Libraries Unlimited, 2007).

P.S. As always, I'm glad to participate in the Friday Poetry Round Up, hosted this week by Semicolon. (Thanks!)

Picture credit: www.nssd112.org
Posted by Sylvia Vardell at 8:19 AM 3 comments: Links to this post