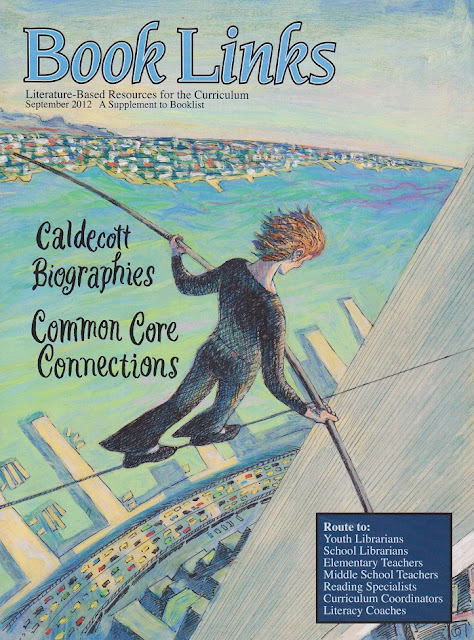 Have you see the September issue of ALA's Book Links magazine?

J. Patrick Lewis, the current Children's Poet Laureate, agreed to an interview and shares his thoughts about history, research, and mixing humor and poetry. As a bonus, here are few of his responses (and questions) that we didn't have room for in the magazine.


SV: Two of your social studies-themed poetry works are collaborations (Castles: Old Stone Poems with Rebecca Kai Dotlich and Self Portrait with Seven Fingers: A Life of Marc Chagall in Verse with Jane Yolen). Is collaborating with a fellow poet any different when the topic is historical in focus?

JPL: What I did with Rebecca and and am doing with Jane (as well as other poets, forthcoming) is not true back-and-forth rewriting of a single poem. An exception was Birds on a Wire:  A Renga ‘Round the Town, in which Paul B. Janeczko and I follow each other’s short Japanese verses, one after another, to tell a story. But a better description would be to say that most of these two-author books  were simply co-authored. Each poet wrote approximately half of the poems in the collection. Occasionally, one of us might raise a question or make a suggestion to the other poet, but in general it was not anything so grand as a T.S. Eliot-Ezra Pound kind of give-and-take.

Deciding on the topic or tone is mostly a matter of knowing each other’s body of work, and therefore knowing what will or will not work. When Douglas Florian and I decided to do a collection together (forthcoming in 2013), it was obvious from the start that we would not choose a “serious” theme. Until our latest endeavor (our seventh, just finished), Jane Yolen and I had written six manuscripts, only half of them accepted for publication. Jane and I are both attracted to themes that range from the serious (Marc Chagall) to the humorous (twins, animal epitaphs), so one of us comes up with a book idea, and we jaw about it until our excitement grows to fever pitch, and then we’re off and running.

SV: When it comes to tackling American history in poetry, how do U.S. militarism, patriotism, and politics influence your choices?

JPL: I make no attempt to deny my unreconstructed liberalism. At the same time, the didactic poem that wears its heart on it sleeve is destined for deserved oblivion. Poems ought not to proselytize. As a Ph.D. in economics, teachers have asked me to write nonfiction books that combine economics and poetry. That’s been done but not by me. Oil and water would make better companions. And the same thing is true of poetry and politics. Though I confess I am working on a book with another poet about the march on Washington and Dr. King’s “dream speech,” a seminal event in our history.


Lewis has nearly 100 more works of poetry for young people since then featuring everything from narrative poems to limericks, riddles, haiku, acrostics, and sonnets. He is very productive with new works published every year. Besides his collaborations with Jane Yolen (mentioned above), look for these.

***And I can't forget that the kind and generous Lewis the Laureate contributed poems to The Poetry Friday Anthology this fall, too!

STRATEGIES
In the Book Links article, I also included a variety of activities to engage students in reading, sharing, exploring, and expanding upon Lewis's poetry. (In Book Links, they're even linked to Common Core standards.) Here you go!

Poetry Tableaux
Make historical poetry come to life by creating frozen scenes of dramatic interpretation with poetry tableaux. Students can browse Lewis’s many collections of historically-themed poetry to select a favorite poem moment in history and then work with a small group to create a tableau, posing in a scene that reflects the “story” in the poem. For example, the photographs illustrating The Brothers' War: Civil War Voices in Verse provide clues on how to pose the scene suggested by the poem, “Down on the Plantation.” A small group of students can cluster “stooping” and poised in a pent, chopping motion. Simple props such as cotton balls, pillow case “sacks,” and straw hats can add to the impact. Or for “The Blockade of Charleston” in Lewis’s Blackbeard, the Pirate King, a small group might crouch as a band of pirates with one standing in the lead and a few “hostages” trembling fearfully. Film or photograph each tableau along with recording an oral reading of the accompanying poem.

Be the Poem
Poem biographies are a recent trend with poets like Margarita Engle, Carmen T. Bernier-Grand, Charles R. Smith and Carole Boston Weatherford telling life stories of real people in history through poetry. Add J. Patrick Lewis to that list with his many individual and collective biographies-in-poems:
Students can choose a poem about a favorite individual and create or assemble a simple costume to bring their person to life through a dramatic reading. Photograph them in costume and post their images alongside the poems.

The Art of History
Many works of poetry are illustrated with art from the time period to provide a historical connection as Lewis does with pirate paintings by N.C. Wyeth and Howard Pyle in his Blackbeard poem collection. Still other books feature artists and their art to explore the times in which they live, as Lewis does with Michelangelo’s World. Students can try “ekphrastic” writing-- poems inspired by art—beginning with pictures from history (via Smithsonian, Shorpy, or Getty Images) or current events (at Tumblr, National Geographic, or Time Magazine’s LightBox). For example, look at Lewis’s Self Portrait with Seven Fingers: A Life of Marc Chagall in Verse, co-authored with Jane Yolen. His poem, “I and the Village” shares its title with the Marc Chagall painting that inspired it and lists the items the viewer sees in the surreal artwork: a milkmaid, cow’s head, peasant, blossom sprig, green face, beginning each line with, “I”— “I hailed,” “I saw,” “I watched,” etc. Students can choose their art or photographic images and then describe them in list poems or create narrative poems suggested by the stories they imagine in the art.

Place Poems
Students can "travel by poem," as Lewis says, learning about interesting places around the globe through geography-themed poems in his books, A World of Wonders, and Good Mornin’, Ms. America: The U.S.A. in Verse as well as such anthologies as Got Geography by Lee Bennett Hopkins and Tour America by Diane Siebert. Invite students to locate these "spaces and places to be" on a (poetry) map and research them in real time via Google Earth. Mount a large paper world map on a bulletin board or wall and put pushpins in each location for which the students can find a “place” poem. Poke the pin through a small strip of paper displaying the poem title/location, such as Lewis’s “Golden Gate Bridge” and “Empire State Building” from Monumental Verses and “Tower of London” and “Catherine’s Palace” from Castles: Old Stone Poems, for example.

Oddities and Trivia
Poems can be about anything, as Lewis reminds us, even bizarre facts, strange trivia, and world records, as you’ll see in Lewis’s A Burst of Firsts and The World’s Greatest. These poems are also interactive as they invite guessing, fact checking, and “believe it or not” sharing. Students can partner with a buddy to research and write their own trivia-based poems, experimenting with creating a “found” poem using key facts and phrases. Lewis tackles oddities such as the longest traffic jam, the biggest potato, and the most live scorpions eaten by a human. Students can browse the latest Guinness Book of World Records to find their own fascinating topic. The tallest man, for example, might yield a poem based on these facts and phrases: “8 feet tall,” “only 10 cases” “widest hand span ever,” “largest feet on a living person,” “a huge surprise,” and more.


If you weren't already a fan of J. Patrick Lewis's poetry, this year's output alone should convince you on his talents!


Now, be sure to see what else is going on this Poetry Friday at Paper Tigers!

I have decided it's time to update my annual list of poetry books published for young people with new titles I have run across in recent months. Some have been mentioned or featured here and elsewhere already, but I'm always eager to provide a comprehensive resource whenever possible. (I'll update my January list to include all these, too, for future reference.)

That's a total of 75+ poetry books (for young readers) published or planned for this year! (Combined list here.)

If you know of other titles that I have missed (in my combined January and September lists), please let me know. Thanks!

It's still not too late to join the party at Renee LaTulippe's No Water River this Poetry Friday. I'll see you there.
Posted by Sylvia Vardell at 9:31 PM 9 comments: