I'm happy to feature a new book out this year and the force behind it!
The book is H is for Haiku: A Treasury of Haiku from A to Z by Sydell Rosenberg, illustrated by Sawsan Chalabi and published by Penny Candy Books (April 10, 2018). I love the focus on city life and the geometric visuals add energy and drama. Here's one of my favorite pages: 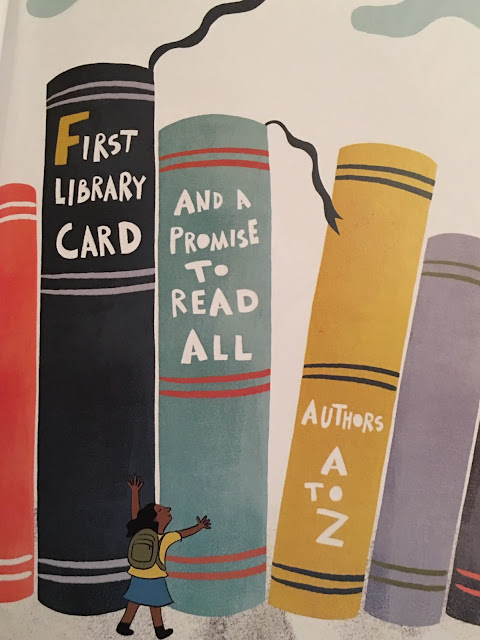 Join me in welcoming Amy Losak, the daughter of author and poet Sydell Rosenberg, who has worked hard to bring her mom's work to the public in book form.

Thank you, Sylvia, for the honor of appearing on your wonderful site!

My mom, Sydell Rosenberg, was a teacher, writer and poet. She lived her entire life in New York City and brought up her family in Queens.

I believe in the early 1960's, Syd discovered haiku and senryu. And she spent the better part of the next thirty years trying to learn as much as could about these special forms of poetry.

In 1968, the Haiku Society of America (www.hsa-haiku.org) was founded in New York. Mom was a charter member. In 1975, she served as HSA secretary.

Haiku became a part of mom's life. Over the years, I have come to realize that she had an unusual way of seeing the world around her. Each new day was an adventure to anticipate and appreciate. The smallest things we might overlook awakened her senses and could inspire poetry. The ability to find wonder in the “small stuff” of daily life is a gift, but it's a gift she cultivated as a haijin -- a haiku poet. Haiku allowed mom to capture and reflect her experiences in ways that were both personal and universal. I think perhaps haiku was a validation of how she engaged with her surroundings.

Syd's poetry (not only haiku and senryu) and other works were well-anthologized over the years in journals, books, newspapers, magazines and other media (including a novel public art project in 1994 which used the marquees of abandoned movie theaters as “frames” for micro-poetry, Haiku on 42nd Street). But she always wanted to publish a kids' book, preferably a haiku alphabet reader. After her sudden death in 1996, her family promised to try and make her dream a reality.

Of course, once we had made this decision, it didn’t happen overnight. Years passed before I was able to marshal the necessary time commitment – not to mention the emotional energy – to review any of the old manuscripts she had submitted decades ago to publishers; as well as notebooks and other papers; make some edits; research publishers (especially publishers open to unagented submissions); finalize the manuscript; and start sending it out. It was a long, meandering road, filled with potholes.

In the interim, I embarked on other creative projects to leverage mom’s poetry with today’s audiences, especially kids. I contacted arts education and literacy organizations with ideas to use her haiku as teaching tools. I finally connected with a wonderful nonprofit arts education organization in New York, Arts For All (www.arts-for-all.org). For several years, we have had a successful partnership. Mom’s haiku and senryu have been used to teach the basics of painting, drawing and collage; music; and theater in a Bronx school and a Queens school. I’ve also conducted readings of her adult and kids’ poetry at the Queens Botanical Garden and The Poets House in NY, respectively. In addition, a few years ago at the Children’s Museum of the Arts in New York, teaching artists created a glorious, golden structure a haiku PoeTree! 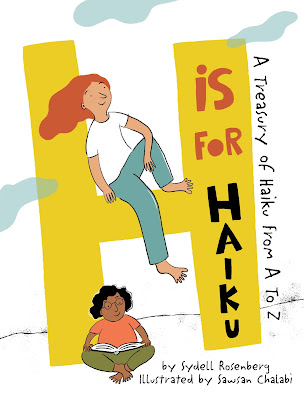 But the ultimate goal has always been this book. The first manuscripts were mailed out on April 1, 2015. In 2016, thanks to a recommendation from poet, editor and teacher, Aubrie Cox, I learned about Penny Candy Books, founded by poets Chad Reynolds and Alexis Orgera. We signed the contract on October 31, 2016. And thanks to the amazing Penny Candy team and the support and kindness of a legion of people: my husband, family members, friends, coworkers, poets and children’s authors, Syd’s dream of a picture book for children has come true.

The collection in H Is For Haiku: A Treasury of Haiku from A to Z, is about the bits of magic in our daily lives. They are paired with Sawsan Chalabi’s witty and lively illustrations. Both kids and parents will, I hope, enjoy them.

And I have discovered that I too love haiku and senryu. Mom would be astonished, because I didn’t show much interest as a child or in later years, even though she would try to engage me, asking me to provide feedback about her work. I started writing short poetry several years ago. In retrospect, mom’s approach to viewing the world has influenced me more than either of us realized at the time.
I am a late beginner. That’s fine with me. What matters more than the product – the poem – is the process of slowing down in order to glimpse the richness in small moments. I hope to keep learning and growing as a poet. I think Syd would be happy with what I’ve done. And most of all, I hope readers will be happy.

Thank you, Amy. I think we're all happy you helped make this book happen and that you're continuing your mom's legacy with your own writing too.

Now before we launch into April and National Poetry Month, check out the Progressive Poem challenge (with a bit of history too) and all the Poetry Friday happenings over at Heidi Mordhorst's blog, My Juicy Little Universe.