Our 5Q Poet Interview series for National Poetry Month continues with this interview with Marilyn Singer about her new book, Every Day's a Dog's Day: A Year in Poems. Graduate student Liseth Martin offers this interview (plus) with Marilyn.

About Marilyn Singer
Marilyn Singer was born in 1948 and grew up in Long Island, NY. She was an English high school teacher for four years and then decided to pursue writing. After writing film notes and teacher’s guides, she wrote the book The Dog Who Insisted He Wasn’t, which was published in 1976. Excited with its success, she was propelled into writing many more books.

Inspired by her Romanian grandmother who told her folk and fairy tales, her mother who read books to her and her father who sang songs to her, author Marilyn Singer has written over ninety books. Singer writes various genres: nonfiction, fiction for young adults, novels for children and poetry. She likes to challenge herself as well as reflect the different parts of her personality, which have a many ways of expressing themselves.

Her favorite form of writing is poetry. She feels that poetry’s rhythm and rhyme are very appealing. Poetry has the ability to surprise in ways that prose can’t. She believes that with poetry you are able to capture a moment or emotion and say a lot in a very small amount of words. Also, poems can relate to many different subjects. Singer created a poetry form called reverso, which she featured in the Bluebonnet Award nominee Mirror Mirror.

Singer is a versatile and talented author who has won many awards. Her book Every Day’s a Dog’s Day: A Year in Poems is a great addition to her repertoire.

• This link on her website features many interviews, including one on David Harrison’s blog:
http://marilynsinger.net/category/marilyn/interviews/

• Something About the Author Volumes 80 and 125 “Sidelights Sketch” by J. Sidney Jones can also be found on her website:
http://marilynsinger.net/marilyn/something-about-the-author/ 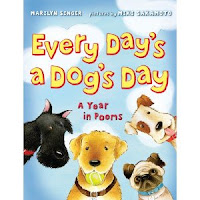 Book Summary
Singer, Marilyn, 2012. Every Day's a Dog's Day: A Year in Poems.
Dial Books for Young Readers. Illustrator: Sakamoto, Miki.
ISBN 978-0-8037-3715-0
Every Day’s a Dog’s Day is a collection of 30 poems told from a dog’s point of view. The dogs describe how they feel on holidays such as Valentine’s Day, Halloween and Christmas as well as other events that occur in their lives throughout the year. The four main characters are: Buddy, Rosalie, Barkley and Fizz; each dog has a wonderfully different personality. The poems tell about different events the dogs experience individually or together such as snow day, grooming day, first flea day, and cat-chasing day. Singer cleverly writes from a dog’s perspective and truly captures how dog’s probably view certain activities. Singer’s varied rhyming patterns and different poem forms were grouped perfectly to create this very amusing book. Sakamoto’s vibrant and adorable illustrations are a perfect addition to Singer’s poems.

Review Excerpts
Publishers Weekly (February 27, 2012)
Lively and often humorous poems that range from rhymed couplets to haiku… Sakamoto creates blissful scenes of cartoon dogs engaged in familiar behaviors like digging, snoozing, and relating to the kids that love them.

School Library Journal (February 1, 2012)
Simple verses about the seasons and the holidays, written from a dog's point of view. In "Valentine's Day," Rosalie waxes sentimental about her owner…Wordplay abounds… For older children, the poems and pictures present a structured overview of what a year may entail; younger children will just appreciate the poems in and of themselves… Sakamoto's bright, cartoonlike depictions of Buddy, Rosalie, Barkley, and Fizz are adorable and funny, and will surely elicit long and loud aws and giggles.

Interview
1. Which of the four dogs in your book would personify you best? Do the other characters resemble someone in your life?

Well, I think my sentiments resemble Fizz's in the opening poem which says that there are good days and bad days for dogs (and by extension for people). All of the dogs in the book have thoughts and experiences I associate with dogs in general, but not always dogs I've known in particular, so in that way they resemble all of the dogs I've had or met.

Although I'm not elegant-looking-- and although none of the main characters in the book are this breed-- my personality is probably most like a standard poodle (I've owned two). I like to think of poodles and myself as smart, funny, and game for a walk in a park, a good party, or a lovely lie-down on the couch. In addition, poodles fit in well in both the city and the country-- and so do I.

2. If you were able to talk to animals, dogs in particular, what would you want to know? What would you discuss?

That is a cool question. I would love to know why my dog likes some dogs immediately and not others. Because I've done both obedience and agility (obstacle course) training with my dogs, I would also love to explain these exercises verbally and have my dog ask questions when he/she doesn't understand what I want.

My current standard poodle, Oggi, talks a lot--to me, to my husband, Steve, to people on the street, to other dogs. I sometimes want to know what exactly he's saying, but I suspect it would be stuff such as, "Come on, let's go! Come on, let's play! Come on, pay attention to ME, ME, ME!"

3. What is your favorite dog memory/moment?

Oh, I have so many of them. I've had dogs since I was a kid-- I wouldn't want to be without one. Here are some recollections that stand out: winning first place (out of three dogs, but what the heck) at an obedience show with my previous standard poodle, Easy, and also finally (after many failures) getting a CDX title-- Companion Dog Excellent, the second level in obedience-- with him. I tried for the third level, Utility, but by then Easy had had it. He literally left the ring during one of the exercises, which is most definitely a no-no.

Here's my funniest obedience show memory: When we were going for our first title, CD (Companion Dog), we were at a practice show, which is called a match show. One of the exercises required that a dog sit for a full minute with the handler standing across the room. The husky next to Easy got up and began to hump the dog on the other side. Throughout the entire fiasco, which involved removing the offending pooch, Easy, bless him, didn't budge. I was a proud mama that day!

Another funny memory is about our present poodle, Oggi when he was a pup and we took him to the vet. My husband has curly dark hair, as does Oggi. The woman sitting across from us looked at Steve and this puppy in his lap and said, "I've heard of people looking like their pets, but this is ridiculous!" Oggi excels at party tricks. His best is doing a serpentine through my legs at the command, "Under!" and then dropping to a sit right in front of me. Kids LOVE this one!

4. Was there a particular reason you chose those specific dog breeds for the characters of your book? Why did you not include a standard poodle? (She currently has a standard poodle named Oggi)

No. I did mention a pug in one poem, but that was it. The breeds were the illustrator's choice. If she'd wanted to include a standard poodle, that would've been fine with me, but I didn't push for it.

That's a tough one. I'm fond of "Cat-Chasing Day," which was originally going to be the title poem, but my favorite may well be "Thanksgiving."

It's impossible for me to pick my favorite poem that I've written because, frankly, I've written hundreds. I will say that one poem that I read at many conferences is "In the Hood" from MIRROR MIRROR (Dutton). The book consists of reversos based on fairy tales (a reverso is two poems; read the first down and it says one thing; read it back up with changes only in punctuation and capitalization, and it says something different). That particular poem, based on "Little Red Riding Hood," features Red speaking in the first poem and the wolf in the second, and when I read it aloud, I usually hear gasps as people suddenly understand what a reverso is. It's very gratifying!

Sample Poem from Every Day’s a Dog’s Day: A Year in Poems
Valentine’s Day

Today she calls me “Valentine.”
I know that’s not my name.

It doesn’t really matter –
I understand this game.

She hugs me, gives me kisses,
and something good to gnaw.

She has my heart already,
so I offer her my paw.


Activities
Poetry performance ideas for "Valentine’s Day":
• Select four students to read each one of the four stanzas
• As you read the poem aloud, have two students act out the poem; one will be the dog and the other will be the owner.

Fun activity for the entire book:
Students will work in groups of 3 or 4. They will write their version of the book based on another animal. Students are free to choose any animal they would like to write about. For example: "Every Day’s a Pig’s Day" or "Every Day’s a Lion’s Day." The book will include 12 illustrated poems to represent the 12 months of the year. The poems will depict how that animal views one event that occurs each month, not all holidays need to be included.