Our 5Q Poet Interview series for National Poetry Month continues with this interview with Eric Ode about his new book, When You’re a Pirate Dog and Other Pirate Poems. Graduate student Melissa Quisenberry offers this interview (plus) with Eric.

Eric Ode
Eric Ode is a song writer and poet from Washington State. He has won national awards for his songs and many other awards for his works. Ode taught elementary school for twelve years before embarking on his current career path. He is a master entertainer and performs in schools, churches, and libraries across the world. His performances include his songs and aim to get the audience involved and having fun. Ode is a Grammy award winner for his contributions to the album All About Bullies… Big and Small and was nominated for his work, All Around the Campfire. More information about his work and performances can be found at: http://www.ericode.com/index.htm.

A video of one of his live and interactive performances can be found at: http://www.youtube.com/watch?v=oGz9HqOSOm4&feature=related. 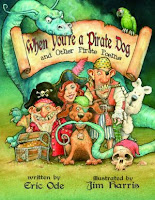 When You’re a Pirate Dog and Other Pirate Poems
Ode’s most recent book is titled, When You’re a Pirate Dog and Other Pirate Poems. The book is illustrated by Jim Harris and is now available for purchase. This collection of poems features romping poems about a life on the sea. The poems featured are silly and sure to send readers of all ages into laughter. The book received a wonderful review from Publishers Weekly that included, “Harris’s detailed and sea creature–studded illustrations have a touch of Steven Kellogg and Mercer Mayer, while Ode’s poems read like rambunctious tall tales.” Readers will get their fill of wacky pirate terminology and may even meet a sea serpent or two along the way.

Interview with Eric Ode1. In what ways do you feel that your poems draw children into enjoy poetry?

I'm often convinced children are quite naturally drawn to poetry provided it's presented in a non-threatening, playful way. That makes my job pretty easy. Children love to play with words. They recognize rhyme and make up silly rhyming nonsense at the earliest ages. Older children enjoy drawing fresh analogies. They play easily with alliteration and imagery. I suppose much of my published poetry reaches boys more easily than girls. The poems tend to be silly, punch line poems and often speak to topics traditionally considered boy territory - cowboys, pirates, monsters, dirt and mud and gross things . . .

Sasquatch Books releases Sea Star Wishes: Tide PoolPoems of the Pacific Coast next spring. I'll be interested to see how kids respond to this collection. The poems tend to be less silly. They do not rely so much on tight rhyme schemes and meter and instead rely other poetic tools.

2. You have poems that range from silly, such as those in your newest book, to more serious subjects such as bullying. Do you find that certain works engage children more than others?

Sillier poetry might be the most readily digested by children. Those might be the books they'll pull off the library shelf on their own. But I have seen children devour more serious and reflective poetry when they've been exposed to it in the right way. My go-to poet, when I want to share dynamic, easily accessible, non-rhyming poetry, is Valerie Worth. Second through fifth grade students love her work, again provided it's presented in a playful, exploratory sort of way.

3. What was your inspiration for your latest book, When You're a Pirate Dog and Other Pirate Poems?

I thoroughly enjoyed writing the poems for my first book of cowboy poetry, Tall Tales of the Wild West (And a Few Short Ones). Some of those longer, story telling poems are, I think, some of the best poems I've ever written. It was a pretty easy leap to go from cowboys to pirates.

4. Do you think you would have enjoyed being a pirate?

Not a chance. I love to travel and explore, but that's where the similarities end. I'd be absolutely miserable confined to a rat-infested ship, bobbing about on the ocean with lousy food and irritable shipmates. And I'm a bit of a pacifist which is probably not an ideal pirate trait.

5. As a former teacher, what suggestions do you have for teachers sharing your new book with their class for the first time? Any fun lesson ideas?

I've attached a study guide I created for Pelican Publishing as a resource for teachers. I hope it's helpful.
Example from study guide:
Read the poem "When You’re a Pirate Dog." Imagine you are a pirate dog. Think about the kinds of things that might happen to you. Think about the places you visit, the things you see, and the things you do. Choose one of the following:

When told to feed a pirate crew,
a pot of pirate stew will do.
You’ll need a kettle, big and rusty,
thick with grime and rather dusty.
Add a dozen buzzard eggs;
sixty-seven spider legs;
thick, congealing spotted eel;
piles of spoiled banana peel;
a cold and moldy minnow spleen;
a lizard gizzard, slimy green.
Now add some musty camel meat
and rancid ants with fuzzy feet.
Then stir it up. (Excuse the smell.)
No other food will feed as well.
The crew will cheer to see it’s true;
You’ve made a pot of pirate stew!
They’ll call the meal a splendid feast.
They’ll eat a dozen bowls at least!
But should they say you ought to try it,
tell them, “No! I’m on a diet.”

Follow up
A fun but still meaningful way to get students involved with this poem would be for them to create their own recipe. Students could decide which type of stew they are going to create such as basketball stew or princess stew. They would then list all of the ingredients that would go into this and the directions for cooking. Then they could illustrate their recipe with a drawing of the completed product. This project is an interesting way for students to not only appreciate the poem but to also get them thinking and creating their own work.

Thanks so much for the post and the support, Sylvia. I enjoyed taking part!