The Year Comes Round: Haiku through the Seasons is Sid Farrar’s first book (published by Whitman). Farrar has been in the book business for many years-- in retail, independent bookstore management, as manager of distribution for B. Dalton, as editorial director a number of publishers, and as executive director for Milkweed Editions. Farrar’s experience also includes consulting with a number of non-profit literary publishers. He is currently the executive editorial director for Hazelden Publishing. While he has always loved poetry, Farrar’s work with B. Dalton sparked an interest in children’s poetry. He started doing poetry readings at his children’s schools and sent some of his collections to a former colleague at B. Dalton, who worked in juvenile poetry and recommended an agent. Initially, the proposals were rejected and Farrar continued to pursue his publishing career. Just a few years ago, he reconnected with the former colleague from B. 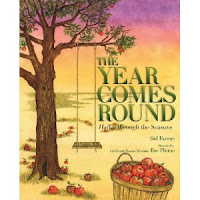 Dalton—now editorial director for Albert Whitman—who was interested in publishing the collection titled “Twelve Ways the Year Comes Around.”

Farrar replaced three of the original haiku from “Twelve Ways the Year Comes Around” with new poems and wrote a thirteenth haiku to end the book. He was paired with artist, Ilse Plume, who provided the artwork for the final book, The Year Comes Round: Haiku through the Seasons. This book instructs parents and teachers on how to teach about haiku and the science behind the nature scenes. Farrar has also submitted proposals to Albert Whitman for two new books: a picture book in verse called “Baby Jody Wakes Up” and a collection of poems about a very eccentric character called Tiny. He hopes to continue to publish children’s poetry books in the years ahead.

1. What was the inspiration for The Year Comes Round: Haiku through the Seasons?

I wanted to instill an enjoyment of poetry in my own kids and entertain them as well. I’ve always loved Japanese poetry, especially as much of it reflects a holistic sensibility regarding our relationship with nature and the cycles of the seasons. Most haiku reflect a particular season and I wondered if, being Westerner programmed with the 12 month paradigm for the passage of the time across the year, I could use haiku to show how the months reflect the movement of the seasons by using snapshots of familiar natural events that most kids would recognize.
2. What is your creative process? Please describe any routines, patterns, or rituals that you have.

When I write, I generally start either with a phrase or image that interests me or just pops into my head and start to play with it—literally word play—and see where it takes me. With “Twelve Ways,” I started with the concept I described, chose the challenge of the haiku form and sat with pen and paper until an animal or natural scene indicative of that month and its time in the season would come to me, and then would write a short 3 line poem to try and capture it. The subsequent drafts were a process of refining the image and the corresponding words and phrases into the 5-7-5 syllable haiku formula.

3. Why haiku? What made you choose this poetry form?

I answered some of this in #1; I chose haiku because I think it’s the purest form of poetry in as much as poetry can distill thoughts, feelings, and perceptions into the most concentrated form that, when successful, can evoke a response in the reader that actually transcends language—a kind of (aha!) experience that needs no further commentary. Most of my children’s poetry rhymes and in trying to capture the natural rhythms of spoken language doesn’t usually follow traditional poetry formal patterns, so haiku also gave me a challenge of staying true to a traditional form which doesn’t lend itself to rhyme or natural speech.

4. As a poet, who or what inspires you? What are you trying to communicate through your work?

In the case of this book, it was nature and because I’m interested in ecology and environmental issues, many of my other poems are about animals and natural settings. My other poems are mostly about the human animal, especially children, in attempting to see the world fresh through their eyes.

5. If you could keep one poem (only one) in your wallet, on your fridge, pinned to a bulletin board over your desk—what would it be and why would you choose it?

That’s a tough one—I like so many different poems for so many different reasons. The poem I’ve probably read the most is a poem about writing poetry by one of my favorite poets, Wallace Stevens, called “Final Soliloquy of the Interior Paramour, “ so if forced to choose one, it would probably be that one.

Here is a sneak peek at a few of the haiku poems from The Year Comes Round: Haiku through the Seasons:

July
A mystery how
These endless rows of corn can
Agree on their height.

November
Lawns call a truce with
Mowers and slip beneath their
White blankets to sleep.

To introduce this book to children, consider starting with a soothing environment: either outdoors (if weather allows) or in a classroom with classical music playing quietly in the background or a CD of nature sounds.

Read each poem aloud, ensuring that all children can see the pictures. Then, discuss the poems—encourage children to talk about how the poems make them feel and ask them to select a favorite poem. After selecting a favorite poem, have children create a piece of original artwork (drawings, photographs, a diorama, paintings, etc.).

For spring and summer, have children create a kite using a paper bag (http://www.kinderart.com/crafts/bagkite.shtml) –go outside on a breezy day, reread the relevant haiku poems and enjoy the leisure time. In the fall, take children for a nature walk and have them select a leaf to display in the classroom/library. In the winter, created paper snowflakes and encourage children to try writing their own haiku with accompanying artwork (perhaps these could be sent home as holiday gifts to share with families).

For the final haiku, have children draw their own picture of the earth, with representations for each season. Be sure to share haiku and other forms of poetry on a regular basis. Make time every day for poetry breaks and time to experience the pleasure of nature.