Our 5Q Poet Interview series for National Poetry Month continues with a second interview about the new poetry book, Cowboys, by David Harrison. This time graduate student Jenny Davidson offers this interview (plus) with the book's illustrator, Dan Burr.

About the Illustrator, Dan Burr
Dan Burr is the illustrator of nine children’s books. His dream of becoming an artist started at an early age as he watched his father paint. As a child, Dan learned to study the world around him and observe the extraordinary wonders of nature. After receiving his Bachelor of Fine Arts degree, Dan set off for New York City to pursue his dream of becoming a professional illustrator. Five years later, Dan decided to return to his roots and moved back to Idaho. Dan completed his Master’s degree in illustration and now teaches classes at a nearby university. Currently, Dan lives in Idaho with his family where he draws the inspiration for his illustrations from the world he sees around him.

About Cowboys
In his second collaboration with poet David Harrison, Dan Burr focuses his artistic talent on bringing to life the many cowboys of the past and present. Cowboys: Voices in the Western Wind is a compilation of twenty-two poems by award-winning poet David Harrison. The poems highlight the unique customs, vocabulary, and challenges of traditional cowboys. Dan Burr’s beautiful illustrations enhance the imagery of the written word.

Interview with Dan Burr
Q: What drew you to the Cowboys project?
A: Actually, A bunch of years ago I had a conversation with Stephen Roxburgh about doing another book and the subject of cowboys came up in the conversation. We agreed that it would make a great book, after Stephen left Boyds Mills Press I thought the project was dead. In comes David Harrison, we worked on Pirates together and had such a great time that Cowboys seemed to be a natural followup book to Pirates. We discussed it, he ran it passed it by Kent Brown at BMP and they went for it. The rest is history.

Q: When collaborating with a poet such as David Harrison, what creative responsibilities does an illustrator have?

A: David and I work back and forth on the books we do together, we discuss the general concept of the book, what we think it should look like, what illustrations I want to do, what poems he wants to write, we discuss, like any other book , how we want it to start, what should happen in the middle and how it should end. My responsibility is to visualize the book, usually the images come to mind when I read the text, with these projects we discuss the poems and images at the same time.

A: As an illustrator I always research the subjects that are included in the paintings, It's important to me that I represent things accurately both historically and contextually. I am surrounded by cowboys and ranchers living in the Teton Valley, although they are modern versions of their historical counterparts, they have not changed that much. I did consult with several experts to help me with the details for the regional specific cowboys. Most modern cowboys tie there interests to the history and tradition of the region where they live, they did most of the research for me with out knowing it. Their knowledge and attention to detail is impressive and very much apart of their live. I dedicated my portion of the book to them.

Q: What was your favorite part of working on Cowboys?

A: I really loved portraying the characters in the book, all the models for the paintings are friends of mine and either came the studio for photo shoots or I went out to where they were. I spent time on horseback in the mountains bringing cows down from their summer pastures, I joined in at branding time in the spring desert of central Idaho, the scenes I put together are as real as I could make them, hopefully the viewers of the book will enjoy them as much as I did.

Q: What process do you go through to create illustrations for a book such as Cowboys?

A: The process is very involved, I start with very rough sketches outlining the basic ideas and composition of the paintings, next I start the research for each painting, every detail has to be represented accurately, so I do the research. I take photos of what is available, If I can't find it then I look for historical photos or paintings from the time period. Once I have the research done I contact models who I think will best represent the character, we discuss the idea and clothing that will be included, I pose them, light them to represent a specific time of day, take a bunch of photos and then the work begins. Next comes the finished drawings, this is where I work out all the problems and make sure anything I want to include is there and represented accurately, I work out the expression of the characters, the gesture of the animals and anything else that has to happen. Once that is done, I start painting, usually in 2 or 3 days I will have it finished, then it starts over again with the next one.

Preview
Below are two of Dan Burr’s illustrations that will be featured in Cowboys: Voices in the Western Wind. 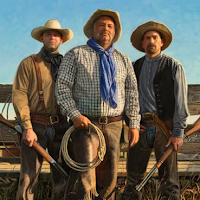 Curriculum Connections
Cowboys: Voices in the Western Wind can be used to enhance a unit of study focusing on cowboys and cattle drives.

Begin by asking the children to share what they know about cowboys. Encourage them to share what they know about the clothing and lifestyle of cowboys. Bring in items of clothing and equipment traditionally used by cowboys such as boots, spurs, saddles, reins, and cowboy hats. Allow time for the children to study each item and talk about its purpose.

Each day during the unit of study, select poems from Cowboys: Voices in the Western Wind to read in conjunction with additional cowboy literature from all genres--fiction, nonfiction, tall tales, etc. Be sure to include videos illustrating the cowboy culture. Create a chart such as the one below. Each day have the children add things they have learned in each column.

At the end of the unit, refer children to the information they have gathered about challenges the cowboys faced. Have the children write a diary entry or letter from the perspective of a cowboy describing a day on a cattle drive. Encourage them to incorporate cowboy vocabulary into their writing. Have a cowboy campfire, and let the children share a favorite poem or their own writing with others.

Featured illustrations are used with permission by Dan Burr.

Way to go Dan! You brought back so many good memories. I'm eager to get to work on our next collaboration! David

Thanks for David and Dan's interviews. I love Dan's illustrations and David's poetry. Great combination. I lived in Idaho for many years and have always been facinated with cowboys and their way of life. Mary Nida