Our 5Q Poet Interview series for National Poetry Month continues with this second interview with Marilyn Singer -- this time about her new book, The Superheroes Employment Agency. Graduate student Carrie Martin offers this interview (plus) with Marilyn.

About Marilyn Singer
Marilyn Singer was born in New York and lived most of her young adult life there. She attended Queens College in New York and later Reading University in England. She graduated with a B.A. in English from Queens College and a M.A. in Communications from New York University. For several years Singer taught high school English, but in 1974 her writing career began. She started small by doing teaching guides on film and filmstrips, and writing poetry, some of which was published. However, her writing career truly began when she was inspired to write a story that featured talking insect characters that she had made up when she was a young girl. With the positive responses she got and with her husband’s encouragement she continued to write and had her first book The Dog Who Insisted He Wasn’t published in 1976. Today she is known as an award-winning author that has published over ninety books for children and young adults in a variety of genres that include poetry, picture books, non-fiction, fiction for young adults, and novels for children. In interviews she states that her favorite genre to write is poetry.

For more information about Marilyn Singer, visit her website:
http://www.marilynsinger.net 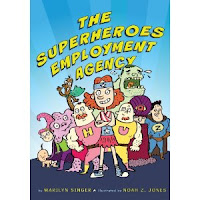 An Interview With Marilyn Singer
1) Q: After reading The Superheroes Employment Agency, it is funny, silly, and really made not-your-ordinary-everyday superheroes shine. What inspired you to write this book?

A: When I was a kid, I was a big fan of old school heroes such as Robin Hood, Sir Lancelot, and Zorro. I used to write little plays about them, and I got to be the lead. One play was about Robin Hood as a kid, getting spanked by his parents for doing something wrong. So action/adventure and comedy were both in my consciousness at an early age. Also, although I wasn't a big superhero comic book reader, I've enjoyed many TV shows and movies based on superheroes, such as Superman, The X-Men, and, currently, Alphas, and particularly the ones that are parodies, including The Mask and The Incredibles. I really love good parodies because I like to laugh even more than to be thrilled and certainly a lot more than to cry (in fact, I dislike tearjerkers immensely). So, it's natural for me to want to write funny stuff. That's not to say that I write ONLY funny stuff. I also like to be thoughtful, particularly when it comes to writing about the natural world. But when it comes to superheroes, my inclination is toward the comedic.

The genesis of this particular book came from a discussion over what themes would work for a poetry collection. To be published, most books of children's poetry these days have to have a strong theme. I don't remember if it was the editor or me or someone else who came up with the suggestion of superheroes. I do know that I ran with it and decided that these particular superheroes should be B-Listers, who were badly in need of jobs. My brilliant editor, Lynne Polvino, helped shape the collection further by focusing on the idea of arcs for the characters, and, of course, by telling me when poems worked--or didn't.
2) Q: Some of the characters are parodies based on real superheroes. But how did you come up with some of the other unique characters presented in the book such as the Cajoler, The Pretzel, and The Caterpillar, to name a few?

A: I did some research on superhero abilities (there are lists of them!) to know which I wanted to include. I picked the ones I liked. Then I thought about other possible abilities or twists on those abilities. Finally, I thought about parodies of those abilities. For example, The Pretzel is flexible and can tie up bad guys, but his downside is that he sheds salt. The Caterpillar can wrap up a villain in a silk cocoon, but what he really wants to do is create a clothing design for superheroes. For him, I may of been thinking of Tim Gunn from Project Runway. And then after I created him, I found out that Tim Gunn had been made a superhero called Tim Gunn in a Marvel comic! He gets to wear Iron Man's armor, I believe. Ha!

As I mentioned above, the characters have arcs, so for some of them, I had to think about where they might be dissatisfied with their abilities and want to do something more, or how some of them might be in love with each other or what jobs could they finally land. That was both challenging and fun, and it also helped sharpen their traits.
3) Q: In interviews you have said that poetry is your favorite genre to write. Are there any challenges of telling this particular story of superheroes using poetry?

A: Well, there was the challenge of diversity both in characters and in form. I didn't go for sonnets, triolets, cinquains, haikus, etc. for this particular book (I have done so in other poetry books) because I thought that might be distracting and also too rigid. But I did want to vary the poems in rhyme scheme, length, style.

These poems are witty, so I could go for a more sophisticated vocabulary and rhyme. But that always means I have to watch for things becoming too self-conscious or arch. I mean that just because I was able to make something rhyme didn't mean it was the appropriate rhyme, if you get my drift.

4) Q: What do you feel will draw children into reading this book? How will children identify with these new superheroes you have created? Who do you think it will appeal to the most (boys, reluctant readers, or a specific age group)?

A: I think that many kids are drawn to superheroes and also to comedy, so there's that built-in appeal. I'd love to see classes put on plays based on this book and on the heroes. Or maybe kids can do that on their own, as I used to with my friends. I'd also encourage children to create and portray their own superheroes.

I don't know to whom the poems will appeal most. I don't really think about that when I'm writing. I guess I'm more concerned with whether they appeal to me! My guess is that some people will stick these in boys' hands, but I truly believe that girls will also enjoy the book--and I made sure to include quite a few female superheroes.

5) Q: What super hero ability or abilities would you most like to have and why?

A: Ah! I would love to be able to fly. I would also love to zip from place to place by gliding a foot or two off the ground. I've had several dreams where I could do that, and it felt great!

I also wouldn't mind being like The Cajoler--able to convince people to do things just by using my mind. Of course, I'd only use that power for good (like getting publishers to publish ALL my manuscripts; that's for good, isn't it?).

You know that dude built like an ape?
Can leap and fly in tights and cape?
Nickname is the Man of Steel?
Trust me, kid, he’s no big deal.
Bad guys? I don’t need a punch
to incapacitate the bunch.
I just recite my epic poem
or chapters from my latest tome

or several acts from my new plays,
and-presto!-their eyes start to glaze.
I’ve essays and reports galore
I guarantee will make them snore.
Yes, indeed, my power’s super:
You don’t believe me? Then listen, please:
“Chapter Ninety-One: How to Eat
Cottage Cheese.”

Sharing the Poem
A fun way to share the poem "Stuporman" with students would be to dress up as the superhero and make a humorous and grand entrance pretending to be the hero. After sharing the poem aloud several times, students can then join in and read the poem along with you. After sharing, take time to read other poems from the book as well so that children can get a sense of the variety of fun and different superheroes the book portrays.

Follow up Activities
After sharing a variety of poems, have students participate in creating their very own brand new superhero. Have them first brainstorm what superhero powers they would like to have and why and create their superhero based off of these powers. From this, children can then create a superhero profile all about Who they are, What they look like and What their super power(s) are, How they can help people, When might someone need them, and Why they are important to the Superheroes Employment Agency. After creating their superheroes students will then participate in a Wax Museum but in which the statues can come to life. Students will be given the opportunity to dress as their superhero and when touched they will come to life to tell visitors and spectators all about what makes them a superhero.