Paul Fleishman’s unique poetry book for two voices, Joyful Noise, received the Newbery medal in 1988. This is the second book of poetry to win the Newbery award since 1922. (Remember that Nancy Willard’s A Visit to William Blake’s Inn won in 1981.)

Reading poems for two voices is the most complex and challenging form of choral reading, in my opinion, but also a lot of fun. It takes a bit of practice, but is very powerful. Two individuals volunteer to practice and perform poems for two voices (often with overlapping lines). It can be effective with two groups, rather than with two individuals, but it does take practice. (Underline the lines that are spoken simultaneously to help cue the children. Be aware that they may be saying different words at the same time.) 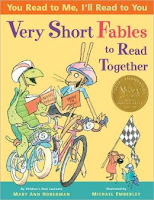 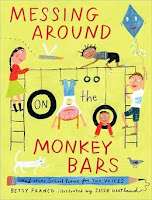 Bilingual Poetry
If you hunt, you can find poems that may not be intended for two voices but may be very effective delivered that way, particularly bilingual poetry collections with poems that appear in two languages. For example, Jennifer Clement’s poem “Arbol de Limon / Lemon Tree” appears in both Spanish and English (translated by Consuelo de Aerenlund) in Naomi Shihab Nye’s collection The Tree Is Older Than You Are. If you are a Spanish speaker, you can read the poem in Spanish, followed by a reading in English. Or you can ask a Spanish-speaking volunteer from the audience to read the Spanish version. Once the readers have taken turns presenting their versions of the poem, both read their versions simultaneously. Just be sure to encourage the readers to pause at the end of each line and to start the next line together. The effect is quite stunning. This can work with many bilingual collections of poetry like: 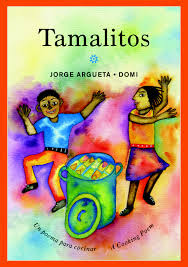 Image credits: Groundwood;HarperCollins;Candelwick
Posted by Sylvia Vardell at 12:30 AM

Sylvia, thanks for reminding us of these great titles. I hope to see a resurgence of poetry performance in the classroom with titles like these to promote fluency (and have fun!)

Performed "Whirligig Beetles" from JOYFUL NOISE when I was with Poetry Alive! Paul is da man!!!!!