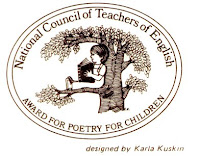 In 1977, the National Council of Teachers of English established the first award for poetry for young people with the NCTE Award for Excellence in Poetry for Children to honor a living American poet for his or her lifetime achievement in works for children ages 3–13. It is now presented every two years.

The first one was awarded to David McCord (Far and Few: Rhymes of the Never Was and Always Is, 1952) creator of “The Pickety Fence” and many other beloved poems.

All of the NCTE poetry award winners:


Contemporary Connections
The latest NCTE prize is going to the marvelous Joyce Sidman who has a new book coming out this fall that I am very very excited about: 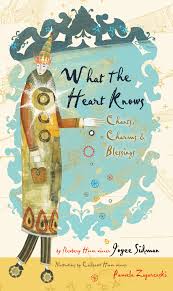 And of course you know about her other wonderful works of poetry:

Just Us Two: Poems about Animal Dads
Eureka! Poems about Inventors
The World According to Dog: Poems and Teen Voices
Song of the Water Boatman and Other Pond Poems
Butterfly Eyes and Other Secrets of the Meadow
Meow Ruff: A Story in Concrete Poetry
This is Just to Say: Poems of Apology and Forgiveness
Red Sings From Treetops; A Year in Colors
Dark Emperor and Other Poems of the Night
Ubiquitous: Celebrating Nature’s Survivors

Joyce is such a great poet. I am so happy for her. I love her work.

I have written a special poem on my blog today honoring the little boy named Martin who died Monday in the bombing in Boston.

Could you visit. I have a special request to honor his memory. Read my blog at
http://mary-anderingcreatively.blogspot.com/ to learn more.

Thanks for your support.

I love Joyce Sidman's poetry and have read all of her books! I use her books to help inspire my students and myself to write poetry. Thank you so much for telling me about this new book. I can't wait to read it! October is too long to wait for it. Joyce certainly deserves the NCTE award.