Another snippet from the history of poetry for young people...

Edward Lear published A Book of Nonsense in 1846, a volume of limericks followed by the compilation, Nonsense Songs, Stories, Botany and Alphabets (1870) which included the classic poem, "The Owl and the Pussycat." It begins:

"The Owl and the Pussycat went to sea
In a beautiful pea-green boat,
They took some honey, and plenty of money,
Wrapped up in a five pound note."


Contemporary Connections
Over the years, many illustrators such as James Marshall, Jan Brett, and Robert Ingpen have created their own picture book versions of Lear's marvelous poem, "The Owl and the Pussycat." Which contemporary poet carries the Lear mantle, imo? Calef Brown. In fact, he collaborated with author Daniel Pinkwater to produce this picture book poem compilation of Lear-mania: 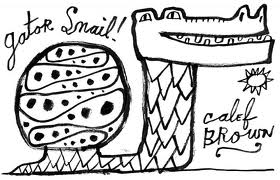 By Calef Brown
And his solo works carry the same brand of nonsensical narrative, regular rhyme, and wacky art that marked the work of Edward Lear. Check 'em out:

Image credit: art.com;nonsenselit.org;doodle4nf.org
Posted by Sylvia Vardell at 12:30 AM

I am loving all these blasts from the past! Thanks, Sylvia.

In a school visit last Friday to ring in Poetry Month, we created group limericks with inspiration from Mr. Lear's 1846 concoctions. What fun! (Thanks to Liz Steinglass whose recent limericks on her blog got me thinking....)
:0)

This 'blast' took me back, Sylvia-Lear's rhymes & The Owl & the Pussycat were favorites of my daughter & me. Thanks for that extra intro to the artist-I don't know him!