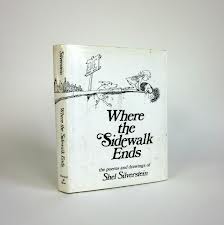 Shel Silverstein published his first of several irreverent works, Where the Sidewalk Ends in 1974. It would become the bestselling children’s poetry book ever. (There's also a CD of selected poems performed by Shel himself and a 30th anniversary edition with additional poems.) When I taught sixth grade (back in 1976!), this was THE ONE book I always said I would want to have with me if I were stranded on a desert island with my students!

This same year, scholar Ann Terry conducted a touchstone study of the poetry preferences of elementary school students finding a predilection for rhyme, narrative, and humor. Her study is still cited as the baseline for where to start in sharing poetry with children.

Contemporary Connections
Even though he passed away, Silverstein’s poetry continues with this posthumous collection:

Silverstein, Shel. 2011. Every Thing On It. New York: HarperCollins.

And for more humor and outrageousness, check out Katz, Katz, and Katz:

What’s up with those funny Katzes?!

Image credits: HarperCollins
Posted by Sylvia Vardell at 12:30 AM

And Alan Katz will be at IRA. I met him at NYSRA this year. He is a hoot! And a really nice guy.