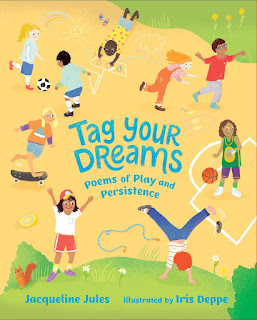 I'm pleased to host another guest post today. Poet and author Jacqueline Jules has a brand new book out this month full of poems focused on sports and activities that kids will surely respond to, Tag Your Dreams: Poems of Play and Persistence (Whitman, 2020). Take it away, Jackie:

Jacqueline writes:
Tag Your Dreams: Poems of Play and Persistence was released by Albert Whitman on April 1, 2020. From baseball, basketball, and football to double-dutch, mini-golf, and turning a cartwheel, these poems look at facing fears, dreaming big, and never giving up.

Backstory from Jacqueline Jules
Tag Your Dreams was a collection written bit by bit over the last twenty years. I was inspired to write “At Bat” in the mid 1990’s when I was a baseball mom, watching my sons and their teammates go up to the plate after striking out. Their courage to keep trying inning after inning struck me as a metaphor for how one should live life.

Forget wrong decisions
returning in silence
to sulk on the bench.
That was last time
and the time before.

Back then, as now, I did poetry workshops in classrooms. I decided as part of one of my poetry workshops to let a class vote on the best ending for my poem, “At Bat.” The students chose “send fear sailing over the fence” and I’ve been happy with the last line ever since.

Several poems in Tag Your Dreams were regularly shared in poetry workshops with students. My school district has a wonderful program called Pick a Poet in which working poets are invited into individual classrooms to discuss their process and provide writing prompts. My most popular workshop was called “Get Active: Writing Poems About Sports.” I offered my own original poems as writing models. Poems on basketball, volleyball, hockey, and skiing described topics the students were familiar with. This background knowledge helped them identify the metaphors and literary devices I used in my work. 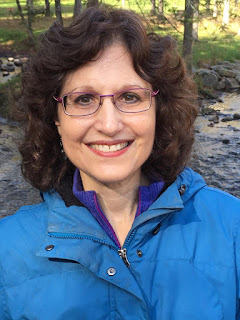 Each time I offered my sports poetry workshop, I was so pleased by the student response, I promised myself I would write enough poems to have a thematic collection. Years went by. I wrote a poem called “Running Back” about watching football with my sons. It was published in The Poetry Friday Anthology (Pomelo Books, 2012). Then I wrote another poem about running just before a rainstorm that was published in The Poetry Friday Anthology for Middle School (Pomelo Books, 2013). I wrote more poems which were published in 2016 by YARN Magazine. One by one, the poems emerged until I finally had almost enough for a collection. That’s when I sat down and actively researched sports I had not already written about so I would have a well-rounded collection. I love finding metaphors in everyday life, particularly ones that represent perseverance. It is not easy to keep reaching for a goal. Trying again after a loss is the secret to success not only in sports, but in life. Writing the poems in Tag Your Dreams helped me handle disappointment in my own life. Many of these poems were personal pep talks. I used the imagery of getting up after falling on a mat or off of a bike, to encourage myself to move forward when I felt discouraged. The poems in Tag Your Dreams describe being active and discovering both physical and personal strengths. I hope young readers will be inspired to reach for their own goals as they read these poems.

Be well! Be active!
Jacqueline Jules

Sylvia: Thank you, Jackie, for sharing this "back story" with us. I've never been much of an athlete myself, although I am an excellent walker! But I agree that sports can be a terrific outlet and release for us all.

Next, join the rest of the Poetry Friday gathering at the Poem Farm where the lovely Amy Ludwig VanDerwater is hosting us all. Stay home, stay safe, and stay well, everyone!

Hello, Sylvia and hello, Jackie! As a neighbor I recall happy times participating in the Pick-a-Poet program. I love that at its heart your collection is about persistence and not just sports, and your story of writing the poems over a long period fits right in.

I wonder how hard we have to hit right now--or how fast we have to walk--to send this collective fear over the fence? Be well, friends!

Can't wait to read it! Congratulations!

This collection is a must have for classrooms and libraries. When I was teaching, I was always searching for sports related poems to share with my students. And I love the theme of perseverance that runs throughout this post.

I love this peek behind the scenes...stories of big projects growing over time are inspiring for all of us. Children will love this - and the connection to poetry workshops is wonderful too. So many congratulations and thank you to you both. Happy Poetry Month and all health. xx

I love the message in these poems, and I'm going to order a copy for my grandchildren. I can't wait to read the entire collection! Congratulations, Jacqueline!

I have two very active granddaughters who will love this book, Jacqueline. One plays softball & had to overcome that fear bigtime when pitching for the first time. The other is a gymnast, also working to get to the next level with new challenges. They will love the poems & be inspired by them. Thanks for your post, Sylvia & for your backstory, Jacqueline, also inspiring!

Thank you for the introduction to Jacqueline Jules and this book. I find 'backstories' fascinating. Be well. :)

Oh I can tell I will love this book and am so interested in your post, Jacqueline. Happy to get to know a fellow poetry person!!
Janet Clare F.