Vikram Madan is an up-and-coming poet with a new book out this spring: A Hatful of Dragons. Vikram was born in India and lives in Seattle, started out as an engineer, and now is an artist and writer-- what transitions, right? I'm lucky to participate in a blog tour highlighting his new collection-- full of humorous, zany poetry sure to be a hit with kids! Here, Vikram share a look at how he got started writing poetry for kids-- honest, inspiring, and informative! 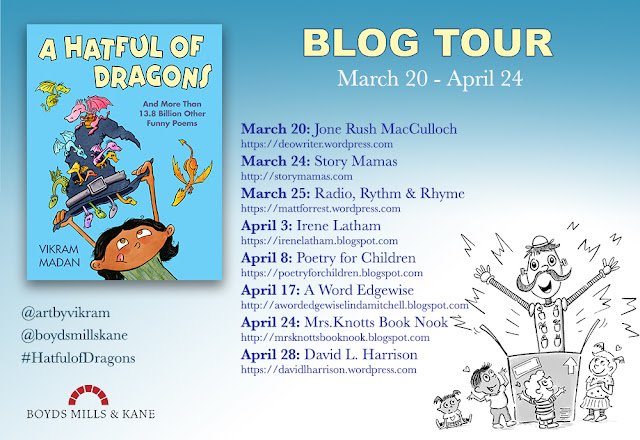 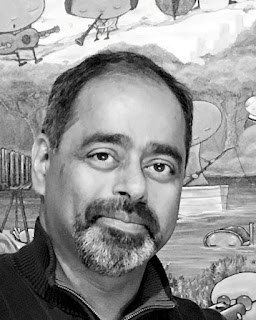 How this book came to be:
I have been writing poetry and drawing cartoons since I was very young, but did not think of combining the two until I encountered Shel Silverstein’s work as an adult.
My early forays with submitting my self-illustrated poems for publication met with universal rejection. At one point I even sent some work to Jack Prelutsky who liked it enough to introduce me to his editor, but she too demurred, saying that it was “too hard to publish an unknown poet”. These consistent rejections convinced me to eventually try self-publishing, resulting in my first poetry collection, ‘The Bubble Collector’(2013), at which point I learnt that distributing and marketing a book is much harder than writing it!
By 2015, I had put together a second collection of poems (working title: ‘I Met a Man with Twenty Heads’) but was hesitant to self-publish again. Around that time I had a major mural project fall apart due to a contract disagreement (my ‘day job’ is ‘visual artist’) and I suddenly found myself with free time on my hands. I decided to use that time to try finding a literary agent. Between distributing a self-published book and querying agents, the latter seemed less painful! 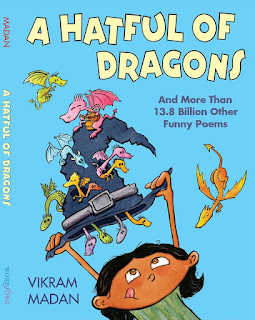 In the past, I had targeted agents randomly. This time I decided to be a little ‘smarter’. Every week Publisher’s Weekly sends out a Children’s Bookshelf newsletter. I started harvesting agent names from the ‘Rights Report’ section of the newsletter, with the assumption that agents placing books were both active and successful. I would then look up their submission policies and query anyone who did not explicitly refuse poetry submissions.
After literally dozens and dozens of queries over a period of months, one agent, Rosemary Stimola at Stimola Literary Studios, expressed interest, liked the manuscript, and signed me on. It took Rosemary another year to find an interested editor, Rebecca Davis at Boyds Mills & Kane. Rebecca took the time to distill my 150-page manuscript into a chiseled 64-page proposal and by the time we signed a contract, it was already 2017. The book was scheduled for publication in 2020 and we started working on it in late 2018, at which point it took me a whole year to get the words and illustrations up to the high standards of my editors.
Looking back, if that mural project hadn’t fallen apart, or Rosemary not signed me on, I would have probably ended up self-publishing a poetry collection, but it would not have looked like, or even been half as fun as, ‘A Hatful of Dragons’. I am very grateful to Rosemary Stimola, Rebecca Davis, and Barbara Grzeslo (Art Director and Book Designer) at Boyds Mills & Kane for helping make this book what it is!

Here, Vikram provides manuscript pages that show early and near-final versions of the book in process: 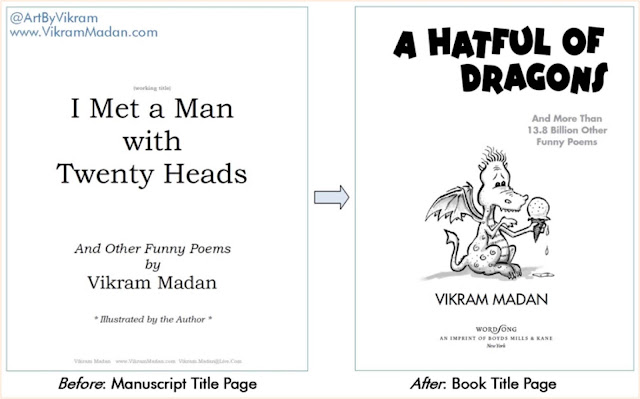 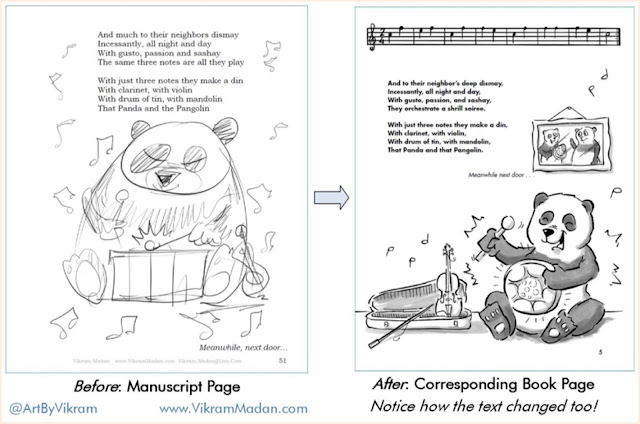 Next, here's Vikram performing one of the poems from A Hatful of Dragons, "Fifty Ukuleles"--- while playing a red ukulele and SINGING the poem (and I LOVE singing poems!):

Sylvia: Thank you, Vikram, for sharing this fascinating back-story and art. We look forward to a "hatful" of hilarious poetry from you!