"I Wish" by Toon Tellegen 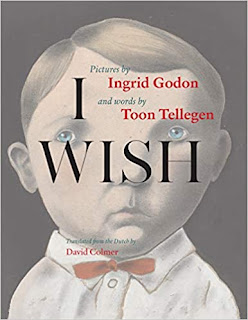 I'd like to pause to feature a very interesting collection of poetry and art that came my way this spring: I Wish by Toon Tellegen, illustrated with portraits by Ingrid Godon, published by Elsewhere Editions. This is one of those rare birds: an international book of poetry translated from Dutch by David Colmer that is accessible and fascinating for readers here in the U.S. (and other English-speaking countries).

Elsewhere Editions, a publisher of international, translated picture books from around the world, notes: "An art object as much as a delightful picture book, with laid and vellum pages I Wish uncovers a gallery of portraits inspired by old-fashioned photographs – faces staring out at us with the serious, veiled expressions of a bygone time. Paintings of earnest children, solemn men and women, and persnickety babes speak through Toon Tellegen’s peculiarly affecting poetry. The poems present a glittering kaleidoscope of wishes, from imagined feats of heroism to reciprocated love."

Award-winning Dutch children's author Toon Tellegen offers 33 imaginative prose-poems opening with the statement "I wish" inspired by the luminous, old-fashioned portraits created by Ingrid Godon in this beautiful volume for thoughtful young readers. An exhibit of these portraits by Godon was set to appear at a gallery in New York this spring. "Like dozens of confessions poured from the page, the writing presents a glittering kaleidoscope of wishes, from imagined feats of heroism to reciprocated human love."

About the author: Toon Tellegen is a Dutch writer and poet who published his first collection of stories for children in 1984 and has published more than twenty collections of poetry to date. In 2001, his book Raptors (Raafvogels), translated into English by Judith Wilkinson, won the British Poetry Society's Popescu Prize for European Poetry in Translation. Tellegen was also awarded the Theo Thijssen Prize and the Constantijn Huygens Prize for his entire body of work.

About the translator: David Colmer translates Dutch literature and is a four-time winner of the David Reid Poetry Translation Prize. He received the 2009 Biennial NSW Premier, a PEN Translation Prize, and an International Dublin Literary Award.
About the artist: Ingrid Godon is a Dutch children's book illustrator and artist. Her first illustrated book, Wachten op Matroos, was published in 2000 accompanying André Sollie's poetry. Her illustrations stand out for their poetic, sensitive depictions of people and places. When Ik Wou (I Wish) was launched in 2011, it was nominated for the Deutsche Jugendliteraturpreis award.

This book is such a fascinating combination of art and ekphrastic poetry with a weird, yet child-like sensibility. Here's one of my favorite poems from this collection. See what you think! 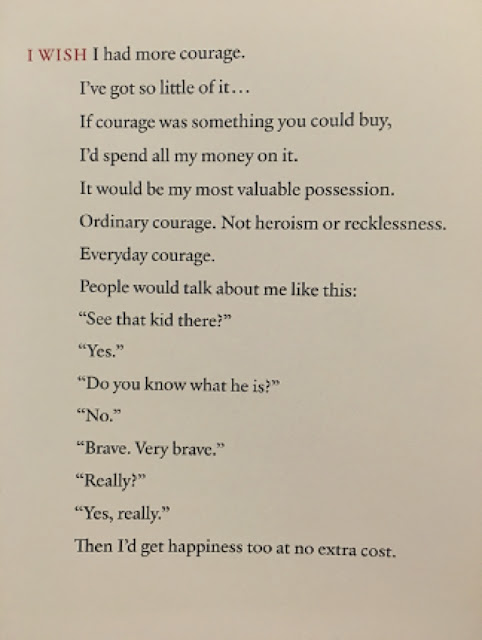 Now head on over to Wondering and Wandering where Christie is hosting our Poetry Friday gathering. See you there!
Posted by Sylvia Vardell at 12:00 AM