I am excited to feature another installment in my ongoing Poet to Poet series. I'm trying to connect two poets, one interviewing the other about her/his new book. Our latest pairing features Laura Purdie Salas, author of Stampede,  BookSpeak!, and her latest, Water Can Be, who interviewed NCTE Poetry Award winner, Nikki Grimes who has a new book out this Fall, Poems in the Attic. Once again, I challenged them to pitch and respond to three questions-- enjoy!

Laura asks: You create and reveal such intimate, realistic characters in your poetry collections and novels in verse.  How do you decide which moments in a character's life to write poems about?

Laura asks:  I know you have a new book coming out:  Poems in the Attic. Would you be willing to briefly walk us through the stages it went through, from inspiration to finished manuscript? I'd love to know what your main goal was in each step along the way. 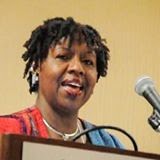 Nikki responds: I'd been thinking about how large a population of young people we now have among us who have parents serving in the military.  Their experience, and the emotional needs that go along with it, are so specific.  I think I'm especially sensitive to the difficulties of constantly being moved around, as a child, because I was, myself, though for very different reasons.  I wondered if I might be able to suggest, through story, a positive way in which military brats might cope with this constant upheaval.  I wondered if, for instance, a child were to catalog his or her experiences, through journaling or writing poetry, if that might be a powerful tool for their survival—because the soldiers aren't the only ones who need to survive.  The wives and children do, too.

I have many friends who were military brats, and I'd heard some of their stories about growing up, and so I began asking them to share more of those stories with me.  I conducted interviews with several of them, both in person, and via email.  I also reached out to the military brat community on Facebook, and elicited a couple of stories from people, there, as well.  Once I had maybe 20-30 such stories, I began to structure the larger story my poems, based on their stories, would fit into.

Since I was drawing from stories that stretched back, in some cases, 20 years ago, I had the idea to use a multi-generational approach to my story, itself.  And so, imagined a little girl visiting her grandmother, and discovering in her grandmother's attic, a cache of poems written by her mother when her mom was a little girl.  I wanted to incorporate the voices of both mother and child, and so I set up paired poems, one by the girl, written in free verse, that would introduce the poems written by her mother, which would be in the form of tanka poetry.  It is a story-within-a-story, an approach I especially like, probably because I find it challenging.  I'm always up for a good challenge!

Laura asks:  On a technical level, line breaks really interest me, and teachers ask a lot of questions about them.  I'd love to hear your take on this.  How do you decide where to break lines? Is it based on meaning, where you want the reader to pause (if you even do want the reader to pause), how it looks on the page, or something different?  Could you share a poem and explain why you chose to break the lines where you did?

Nikki responds: My choice in line breaks is always about meaning, and pauses.  I want the reader to pause where I, as the poet, paused.  How it looks on the page is secondary, although it becomes important if I have two lines that rhyme, and I want the rhymes to fall at the end of each line.  Then, I will break the lines accordingly.  Otherwise, I might choose to keep the rhyming word as an internal rhyme, and wait on the line-break.

In "Wishful Thinking" from Words With Wings, a four-line poem, I chose the first line-break to create a pause:

By breaking here, I cause the reader to stop and ask, "Figured what out?"  Of course, I will answer that question in the next few lines.

Thank you, Laura and Nikki, for sharing so generously!

Thank you for this interview. Great questions to ask a poet and interesting answers.

Thank you, Sylvia, Laura, and Nikki! What a treat to peek behind the scenes of Nikki's work!

This is such a wonderful series, Sylvia! Thank you to Laura and Nikki for the great questions and insights. Enjoy your weekend at IRA!