EXTRA! EXTRA! Cynthia Grady and I LAY MY STITCHES DOWN

It's time for another installment of my "Extra! Extra!" feature. This time poet Cynthia Grady is sharing a poem that did NOT appear in her book, I Lay My Stitches Down, and the back story behind it. 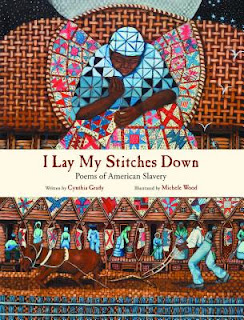 I LAY MY STITCHES DOWN
Cynthia Grady

I LAY MY STITCHES DOWN: POEMS OF AMERICAN SLAVERY was published in 2012 by Eerdmans Books for Young Readers. It was my first published book. A patchwork quilt is used as an extended metaphor for the entire collection. Each poem is named for a traditional quilt block pattern and each is spoken in the voice of an enslaved individual —except the first and last. Those two poems are spoken by modern day people to bind the work together.

One of my very favorite quilt blocks is called Ocean Waves. When done well, it’s gorgeous, and I wanted to include a poem with that title in a big way. Here is one worked by one of my first quilt instructors, Gai Perry, an extraordinary quilt artist. 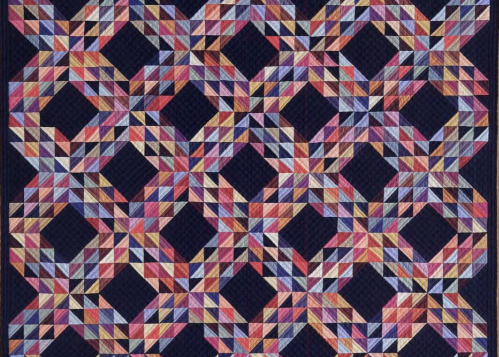 When I was in the MA program in children’s literature at Simmons, I heard Tom Feelings speak about his brilliant book, The Middle Passage-- the horrendous leg of the triangular sea journey taken by slave traders from West Africa to the West Indies. I was so taken with Mr. Feelings’ artistry, compassion, and his vision, that I began reading everything I could on the subject.

Ten years later, when writing the poems that make up STITCHES, I wrote drafts of a poem called “Ocean Waves.” I wrote about the Middle Passage. I researched and wrote some more, and couldn’t come up with a satisfying poem.

So then, I thought maybe I could write a poem about the Quaker-owned whaling ships off Nantucket. They took in runaways, and after the whale hunt, let those people go free in the North. A satisfactory poem didn’t come.

Finally, I thought I could write about enslaved and free blacks working side-by-side on the docks in Louisiana or South Carolina, imagining what that might have been like. I did more research. Here is a draft, that I nixed before even submitting the work.

Ocean Waves
I work ports now, hefting crates. ‘Twas the sea
I loved -- prow piercing the waves, swift as a
needle through silk. Slaves, free blacks, Greeks, Dutch,
Portuguese. Working, sweating, whistling as
one. Until I saw a slave ship. Human
cargo with stench of bile rising on shrieks
from below. Darker than the belly of
Jonah’s whale. Born here, I’d never before
seen my countrymen arrive to these shores.
Such rudderless hope. Mad bondage. My kin.

While I was happy with the collection as it was, I was terribly frustrated and sad that I couldn’t include my favorite quilt block.  But a funny thing—I have never been able to sew a satisfying Ocean Waves quilt block either! Too many triangles!

Thanks for sharing so openly, Cynthia!

Now, head on over to Laura Purdie Salas's blog for more Poetry Friday links.
Posted by Sylvia Vardell at 7:41 PM

What a gorgeous quilt. It seems to shimmer, doesn't it. I am so impressed by the incredible research you did to write these poems and the high standards you set for yourself. I think there is much to admire in this poem--prow piercing the waves as a needle through silk, rudderless hope, and the word human alone at the end of the line separated from the word cargo. Thanks for sharing all of this.

Thank you, Liz! I always appreciate your thoughtful readings.

I know! Such a powerful topic so beautifully considered, I agree! Thank you, Cynthia, for sharing your work and Liz, for your thoughtful comment, too.

I love this book, and it's interesting to see this poem. That last line is just devastating. I'm having to cut something I don't want to lose from a picture book right now, and my editor gently reminded me that the reader will have no idea about what I hoped to do. They will only see what wonderful things make it into the book. That doesn't really make the sense of loss much better for me, even though I know it's true. Beautiful, Cynthia :)