What a treat to end the calendar year with a dialogue about the best poetry published for young people! I was honored to serve as a Round I judge for the poetry category of the Cybils Award alongside Tricia Stohr-Hunt, Margaret Simon, Bridget R. Wilson, Kelly Ramsdell Fineman, and Nancy Bo Flood, led by our noble chair, Jone Rush MacCulloch. In case you’re not familiar with the Cybils, you’ll find more info here. “Cybils” stands for “Children’s and Young Adult Bloggers’ Literary Awards” and these were first awarded in 2006. Currently, there are 13 categories of awards including poetry, as well as book apps, nonfiction, easy readers, graphic novels, speculative fiction, etc. I’ve been lobbying for TWO categories of poetry awards, so that both anthologies AND novels in verse might be recognized (separately). We’ll see what happens with that idea.

Meanwhile, we were allowed to select a maximum of seven titles for our shortlist and we used every slot! Our list features these seven wonderful works of poetry:

Cybils Poetry Shortlist 2014
And here are our blurbs on each poetry title on the shortlist. 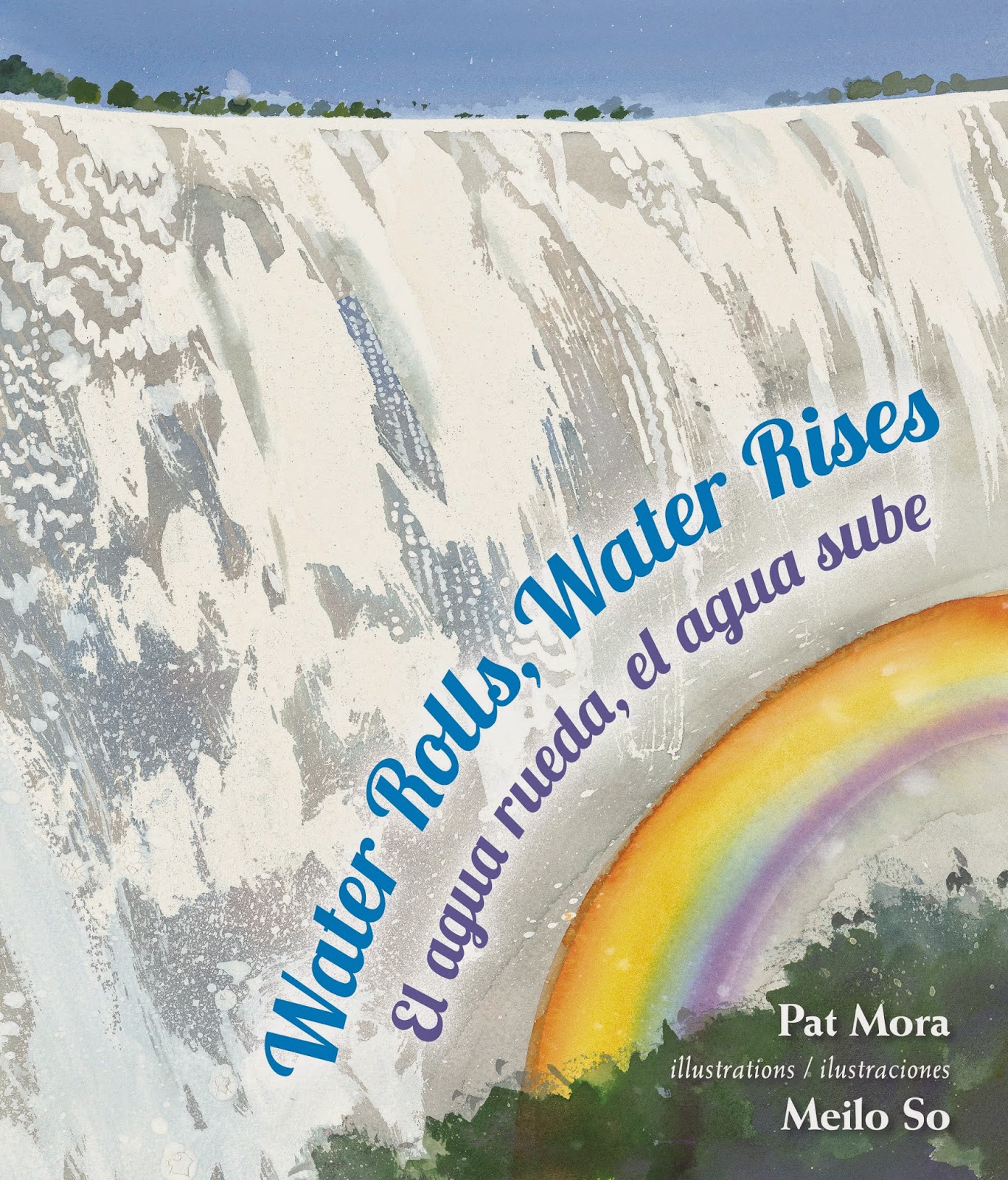 In a series of free verse poems in English and Spanish, our most precious natural resource takes center stage. Water rolls, rises, slithers, hums, twists, plunges, slumbers and moves across the Earth in varied forms and places. Mora’s three-line poems are filled with imagery and emotion. “Water rises/ into soft fog,/ weaves down the street, strokes and old cat.” (In Spanish: “El agua sube/ formando suave neblina/ que ondula pro la calle, acacia a un gate viejo.”) The lyrical movement of water described in verse is accompanied by Meilo So’s gorgeous mixed media illustrations highlighting 16 landscapes from Iceland, to China, to Mexico, the United States and more. Back matter includes an author’s note and information about the images in the book. A joyous, bilingual celebration, this collection brings water to life. 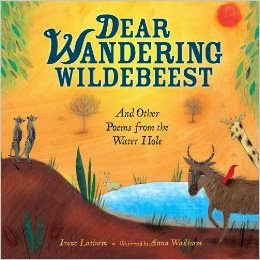 Dear Wandering Wildebeest: and Other Poems from the Waterhole by Irene Latham, illustrated by Anna Washam, published by Millbrook, 2014.

In Dear Wandering Wildebeest, Irene Latham’s poetry bounces with the impala and peeps like the meerkat.  With childlike illustrations by Anna Wadham, Irene Latham takes us on a journey to the water hole of the African grasslands.  Each poem is accompanied with factual information that will inform even the oldest readers.

To All the Beasts who Enter Here, there is word play with "Saw-scaled viper/ rubs, shrugs,/ sizzzzzzzzzzzzzzzzzzzzzles,"  form experiments in Triptych for a Thirsty Giraffe, humor of "Dung Beetle lays eggs/ in elephant poop,” and even danger, "Siren-howls/ foul the air./ Vultures stick to task." Children and adults alike  will love the language and learning that wanders in this book along with the animals of the watering hole.

Margaret Simon
Reflections on the Teche 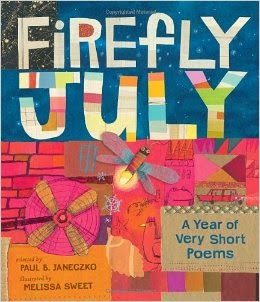 Firefly July: A Year of Very Short Poems selected by Paul B. Janeczko, illustrated by Melissa Sweet, published by Candlewick, 2014.

Prolific anthologist Paul B. Janeczko brings the old and the new together in Firefly July: A Year of Very Short Poems. The collection of 36 poems contains poems by classic poets such as Emily Dickinson and Robert Frost. Intermingled with these are poems by well known children's poets including J. Patrick Lewis and X. J. Kennedy. Firefly July takes readers through the seasons beginning in spring and ending with winter. The poems take readers to different locations as well. Both city and country settings appear in the poems. As the subtitle states, the poems are short, but the images they evoke are almost tangible. Melissa Sweet's mixed media illustrations are colorful, playful, imaginative, and whimsical. They draw readers into the poems. Firefly July is a stellar collection that will likely be a family favorite for years to come. 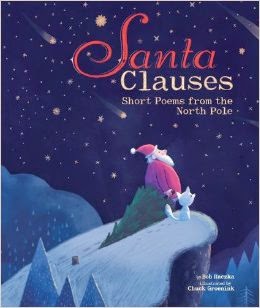 Who knew that among his many talents, Santa was an expert at writing haiku? In this collection of 25 poems using the 5-7-5 format, Raczka brings us Santa's many observations, some about his job: "Wishes blowing in/from my overfilled mailbox--/December's first storm" and others about the weather, the time of year, and Christmas preparations: "Clouds of reindeer breath/in the barn, steam rising from/my hot chocolate". A fun read all at once, or one per day in anticipation of Christmas, some of the haiku work for winter in general as well: "Just after moonrise/I meet my tall, skinny twin--/'Good evening, shadow.'"

Voices from the March is a historical novel in verse that focuses specifically on the momentous march on Washington, D.C. on August 28, 1963, where Dr. Martin Luther King, Jr. gave his landmark “I Have a Dream” speech. Six fictional characters (young and old, black and white) tell their tales on this historic day in cycles of linked poems alongside the perspectives of historic figures (the “Big Six”) and other march participants for a rich tapestry of multiple points of view. It’s been fifty years since the signing of the Civil Rights Act in 1964, when discrimination on the basis of race, color, religion, sex, or national origin became against the law, but as recent events attest, we still have progress to make as a nation. In this powerful work, Lewis and Lyon tackle issues of racial and social justice in 70 lyrical poems that reflect the perspectives of young people and adults struggling with taking action for positive change in peaceful ways. In addition, extensive and helpful back matter includes a guide to the fictional and historical voices, bibliography, index, and list of websites and related books. 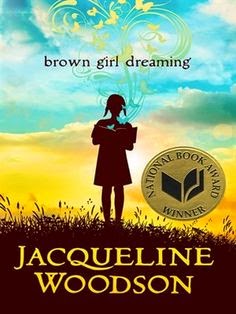 Brown Girl Dreaming is many things in one rich collection – memoir, history, biography – and lyrical, exquisite poetry.  Events of the author’s personal and family history provide the framework for a series of individual poems.  Woven throughout are key events of the Civil Rights journey and also personal effects of racism and discrimination.  In this beautiful and powerful tapestry of verse, one hears the poignant reflections of Jacqueline Woodson, “one of today’s finest writers,” who kept on dreaming through tough times and good times and who keeps on writing in “mesmerizing verse.” 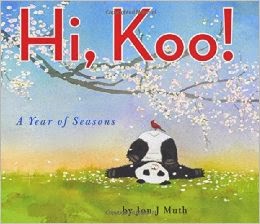 Inspired by his twins, Muth wrote a haiku book that doesn't followe the often used three line, 5-7-5 syllable form. This made this title a stand out among other haiku books. Readers take a seasonal journey from summer through spring by Koo the panda. (Thus the pun in the title: Hi Koo!) Beginning with a simple observation about the wind: found!/ in my Coat pocket a missing button/ the wind's surprise, to the last haiku: becoming quiet/ Zero sound/ only breath, Muth offers to young readers a new way to experience haiku.

The watercolor and ink drawings complement the text. The subtle alphabet theme adds another dimension to the book. The author's note at the book's beginning sets the tone: "...haiku is like an instant captured in words--using sensory images. At its best, a haiku embodies a moment of emotion that reminds us that our own human nature is not separate from all of nature." This book of poetry will help readers to slow down to appreciate the small moments of nature and daily happenings.

Jone Rush MacCulloch
Check It Out

Anyone can nominate a book for consideration and this year there were 36 poetry titles nominated. Here’s that list, fyi: 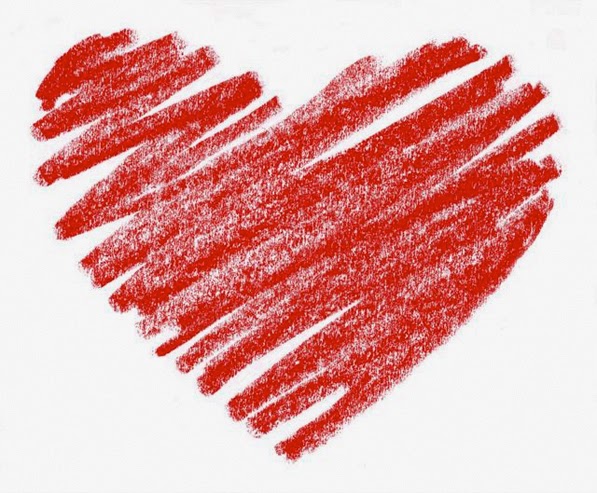 Next, a group of Round 2 judges will consider our shortlist of seven titles and select ONE for the final award. That will be announced on Valentine’s Day, Feb. 14, 2015. I’ll be sure to post that info here then, too.

Meanwhile, congratulations to the poets, illustrators, editors, and publishers who produced these wonderful, diverse works of poetry— from haiku to memoir to novels in verse, with a historical focus, ecological theme, santa-center, seasonal slant, or just plain fun—do not miss these poetry gems!

And who knows what the new year will bring? I look forward to posting my 2015 “sneak peek” list of forthcoming poetry books very soon!

Meanwhile, head on over to my fellow Cybils Poetry Judge, Tricia's place at Miss Rumphius Effect for the first Poetry Friday gathering of the new year.

Thank you for sharing these finalists, Sylvia, and for including the complete list of nominated titles.
Thanks for ALL YOU DO - & Happy Poetic New Year! :0)

Congratulations to the finalists! They're all winners– how ever will the 2nd round judges choose? Happy New Year, Sylvia, with thanks for bringing wonderful lists of poetry to us all year long!

Thanks to you and all the judges for narrowing down my reading list--for a minute, anyway! Happy New Year, Sylvia!

Sylvia, Thanks for listing not only the finalists, but also all of the other nominees. I was an elementary nonfiction judge this year, and know that there were several great books that didn't make our final list, but really should not be missed! Looking at this list, I have lots to keep me busy over the next few months! I can't imagine being a Round Two Judge and having to choose only ONE of these seven!

Thanks for posting both lists, Sylvia - so many wonderful poets out there, we are so lucky.

Can't wait for your Sneak Peek!!

Wonderful post, Sylvia. Thanks for giving such a comprehensive view of the Cybils poetry list and sharing the excitement with us! This is truly a fabulous list.

Thanks for being our reliable poetry cowgirl -- you rounded up these titles nicely!

Hey, thank you all for stopping by and your sweet comments! it's such a privilege to serve as a Cybils judge and I was excited to share our results. I just love that the Cybils award includes a category for POETRY!

Thank you Sylvia for rounding up the final seven here. I didn't realize there were only over 30 nominees? Is that because there are only few poetry books published each year? For fiction picture books (where I have been privileged to have been a Cybils judge over the past three years now (including this year), there are over 200 nominated titles. I agree though that it might be a good idea to have separate categories - but that will whittle down the nominees even further? What a conundrum.
These are all wonderful titles! I hope to feature most of them for our current Cybils reading theme this January/February. Happy New Year, Sylvia!