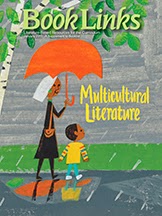 The January issue of BOOK LINKS features multicultural literature, as usual, and this time my column focuses on novels in verse with the clever title (thank you, Gillian) of “Diverse Verse.” Here’s a chunk of that piece which you’ll find in its entirety here.

With roots in ancient epic poetry, the verse novel or novel in verse, continues to grow in popularity, particularly with tween and teen readers. A narrative unfolds poem by poem, frequently with multiple points of view, plenty of dialogue, and in colloquial language. The best verse novels are built on poems that are often lovely stand-alone works of art. The novel in verse form offers the generous white space, short lines, and conversational tone that young readers who are still developing their comprehension expertise find helpful. This format is wooing many young people both to poetry and to reading in general—a promising trend.
Add to this the emergence of more diverse perspectives in the creation of verse novels with many new poets to know. In his essay for The New York Times in March 2014, “Where Are the People of Color in Children’s Books?” Walter Dean Myers, author of several novels in verse, talks about his own development as a reader and a writer. He describes the turning point for him as follows: “Then I read a story by James Baldwin: “Sonny’s Blues.” I didn’t love the story, but I was lifted by it, for it took place in Harlem, and it was a story concerned with black people like those I knew. By humanizing the people who were like me, Baldwin’s story also humanized me. The story gave me a permission that I didn’t know I needed, the permission to write about my own landscape, my own map.” This “permission” has ushered in a whole new generation of diverse verse novelists.
In the last five years, we have seen an explosion in the publication of novels in verse, particularly written by poets offering rich, diverse experiences. They’ve received Newbery recognition (e.g., The Surrender Tree), as well as Printz, Schneider, Batchelder, Coretta Scott King, and Pura Belpre distinctions. Seeking out poets that reflect parallel cultures with many diverse viewpoints enables us to show young readers both the similarities and the differences that make the human landscape so dynamic and interesting. These poets are using the language, experiences, and images of their cultures in ways that are fresh and powerful. The special succinctness of poetry is also an appealing introduction into culture for students. Sometimes powerful points about prejudice, identity, and cultural conflict can be made in a very few words. In addition, we can also rediscover our human universality in the words and feelings of poems that cross cultural boundaries. These poets speak of their lives, of their color, of their humanity, of their humor. Some write in dialect, some use rhyme, some focus on racial pride, some share emotional universals; readers of all cultural backgrounds deserve to know their names and read their works.

Sharing diverse novels in verse: ACTIVITIES
As we select and share these verse novels with students, we can use a variety of approaches to engage them in reading, listening to, performing, discussing, and understanding these works. Here are just a few ideas.

I recently noticed that Monday, January 26, has been declared Multicultural Children’s Book Day! (Has that been around awhile and I just didn’t know?) Very excited to see this development, along with the WNDB movement (We Need Diverse Books). I’ll post more next Friday, too.

Meanwhile, join the crowd celebrating Poetry Friday at Live Your Poem hosted by the lovely Irene Latham. See you there!

Thanks so much for sharing this excerpt from your column as well as this wonderful list! I can see I have MUCH reading to do. :)

Thank you for this!

FABULOUS LIST. Thank you! I am currently reading The Red Pencil. :)

A fabulous list of books and important teaching points. Thanks!

Love the list of activities you shared here Sylvia alongside the list of books. I will be teaching a higher-degree course this August on Using Multicultural Middle Grade/ Young Adult/ Graphic Novels to promote Socio-emotional Learning to teachers who are taking their masters and PhD - I will be sharing this wonderful resource with them - as well as making use of the titles you just shared here.

Such an important and well needed post. Thank you!