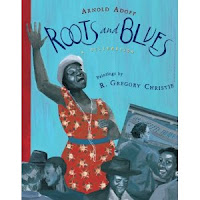 Here is the last installment in the wonderful work my students produced this summer (and generously agreed to share). This is Adaora Eigbobo's readers guide for the book, Roots and Blues by Arnold Adoff.

Summary of Book
Arnold Adoff traces and celebrates the roots of and the music that is the blues. Christie's vivid full color acrylic paintings complement Adoff‟s poems and vignettes about the slavery, hard work, religion, sights and sounds, rudimentary musical instruments and other aspects of the early African-American experience that helped shaped this American music form. He also highlights pioneers and more contemporary blues stars, including Muddy Waters, Robert Johnson, Billie Holliday and Eric Clapton. Each page of text features a short poignant snippet of life, presented as either prose or a shaped speech poem that is laid across the page like a musical arrangement or art work.

Review Excerpts
*Publishers Weekly (2010) Starred Review
"In this visceral collaboration, Adoff and Christie honor the enduring legacy of blues music . . .This is a challenging, open-hearted collection with images and poems that bleed into one another, but also stand powerfully alone."
*School Library Journal (2010)
“This exquisite collection of poems and paintings celebrates the history and culture of blues music. Adoff traces the horrific journey of slaves to America and the role that music played as a means of survival, of passing on "the ancestor words." Christie's haunting acrylic images bring to life the drama and emotion of the music, as well as the dignity of his subjects.”
*Booklist (2011) Starred Review
“Celebrated children’s poet Adoff here offers nothing less than a sensory history of the blues. Christie provides arresting and soul-stirring paintings that echo the poems here and add texture and harmony there, but Adoff’s poems are themselves things to be savored visually as well as out loud.”
*Kirkus Reviews (2010) Starred Review
“Adoff creates a moving meditation on the roots of American blues. … Christie's Expressionistic acrylics employ a palette of crimson, teal and brown, reserving grays for faces and hands, linking shackled slaves with sharecroppers, rocking grandmothers with juke-joint dancers. An incandescent, important work.”

Questions to ask/discuss before reading Roots and Blues
1. What is your favorite kind of music and why do you like it/ listen to it?
2. Play some samples of blues music and ask the students to respond to the music:
a. What kind of music is this?
b. How does it make you feel? Write a few words down about that.
c. Who are some current musicians who sing like this? (Middle schoolers might know Amy Winehouse and Adele, etc.)
3. Why do people sing? Why do you sing?
4. When you feel down and out, what do you do to make yourself feel better?
5. What do you know about slavery? Teacher records the answers on the board or on a poster so the responses can be revisited after. (This question is deliberately open-ended to solicit as wide a range of answers as possible. There are and have been many forms of slavery, not just the African-American experience.)

Suggestions for Reading Out Loud
Have individual students rehearse reading individual vignettes of their choice to a background of mellow blues music and do „spoken word‟ performances for the class.
*“Singing” - Using call and response, have volunteers read the lines of this poem, while the rest of the class reads the lines that begin with ”Still…” in unison.
*Add rhythm to one of the poems by having the students clap, stomp and/or snap a steady beat while reading the words to the beat. For example, “Listening” (p. 51) could be read to a four count beat with just the beat filling the blank spaces in the text.

Follow-Up Activities
Writing
*“Ma Ma” (p. 43) is one of the vignettes that is about a snippet of life. Have the students write a poem about a snippet of their own life, and arrange the text on the page in an unusual way. They should be prepared to discuss why
Technology
*Have students put together a powerpoint or short digital movie on one of the musicians mentioned in the book, e.g. Muddy Waters or Robert Johnson. The presentation should incorporate pictures, facts about the artist with samples of their music.

Social Studies
*Chains, shackles, “the passage across the ocean…” Slavery is a major theme in this book. This book would go well with the 5th grade TEKS on slavery. Have the students identify what this book teaches them about slavery, in both the text and the illustrations.
*Using a world map, have the students trace the route of the transatlantic slave trade, noting facts about some of the important stops on the route.

Art
*What do the blues look like to you? Have the students create art work (drawing, painting, collage, poster) that reflects what they feel when they feel blue or are listening to the blues.
*Have the students illustrate one of the pages that does not have an accompanying illustration. An example, “Take A Single Black Pencil” naturally invites the reader to draw a pencil sketch of the scene.

Music
*If possible, play blues songs on an old gramophone or record player for the students. If not available, find some recordings online that maintain the old scratchy sound. Have them identify what instruments they hear on the records.
*In groups or individually, have students compose a blues song or chorus about the woes of school, using non-traditional instruments that could have been used decades ago, whether mentioned in the book or not: washboards, spoons, sticks, tin cans, buckets, etc. Example: “I've got the Homework Blues”

Related Websites
*The Blues – A PBS series
http://www.pbs.org/theblues/index.html
This website details the PBS series from executive producer, the famed director Martin Scorsese. The various links include information on the roots of and facts about the music, as well as musicians' biographies. It also includes the Blues Classroom with lesson plans and other resources for educators to use in the classroom.

*AOL Blues Radio
http://music.aol.com/radioguide/blues-radio
Choose from a variety of blues styles to listen to on the internet, including classic or modern blues, “She done me wrong” blues, and blues rock.

*The B. B. King Website
http://www.bbking.com/bio/
Visit the website of the King of the Blues, B.B. King to learn about the legendary and ongoing career of the world‟s greatest living blues man.

*International Slavery Museum
http://www.liverpoolmuseums.org.uk/ism/slavery/
Students can learn a lot about the transatlantic slave trade, including the role played by the Europeans. On the Slave Stories link, students can follow the tragic journey of 4 slaves from different parts of West Africa.

Related books
Nonfiction Children’s Literature related to the Blues
*Lester, J. (2001). The blues singers: ten who rocked the world. New York: Jump At The Sun. ISBN 0786824050
This book profiles 10 renowned blues singers, including Billie Holliday, Bessie Smith and Ray Charles.
*Shelf Medearis, A, & Medearis, M. (1997). Music. New York: 21st Century Books. ISBN 0805044825
The authors trace the evolution of African-American music from its African roots to modern rap.
*Shirley, D. (1995). Every day I sing the blues: the story of B.B. King. New York: Franklin Watts. ISBN 0531112292
This is the story of the legendary blues performer B.B. King.
*Bryan, A, & Manning, D. (1991). All night, all day: a child's first book of African-American spirituals. New York: Atheneum Books. ISBN 0689316623
The blues has roots in Negro spirituals, and this book contains 20 of the most popular ones, including: “This Little Light of Mine” and “When the Saints Go Marching In.”

Other poetry books by Arnold Adoff on the African-American experience
*Adoff, A. (1997). I am the darker brother. New York: Aladdin Paperbacks. ISBN 0613014995
This is an anthology of 21 poems by African-American writers, including Maya Angelou and Langston Hughes.
*Adoff, A. (1982). All the colors of the race: Poems. New York: Lothrop, Lee & Shepard Books. ISBN 0688008798
Adoff writes poems from the perspective of a child with a white father and black mother.
*Adoff, A. (1973). The poetry of black America: anthology of the 20th century. New York: Harper & Row. ISBN 0060200898
A collection of poems by African-American writers, including Gwendolyn Brooks and Lerone Bennett Jr.

Arnold Adoff, in his own words
www.arnoldadoff.com
*“Writing a poem is making music with words and space.”
*“I have incorporated the concept of time in my writing by the use of space. The millesecond that it takes the eyes to move forward is an aspect of time. Time is the music or the rhythmic force and that, I think, is a step forward in the medium.”
*“I began writing for kids because I wanted to effect a change in American society. I continue in that spirit. By the time we reach adulthood, we are closed and set in our attitudes. The chances of a poet reaching us are very slim. But I can open a child's imagination, develop his appetite for poetry, and more importantly, show him that poetry is a natural part of everyday life. We all need someone to point out that the emperor is wearing no clothes. That's the poet's job.”

~~~~~~~~~~~~~~~~~~~~~~~~~~~~~~~~~~~~~~~~~~~~~~~~~~~~~~~~~~~~~~~~~~
R. Gregory Christie, in his own words
www.gas-arts.com
*“Although I enjoy painting all ethnicities, in Children‟s books my focus is to depict distinctive images of brown people. I choose to illustrate manuscripts that shed light upon historical figures and give a sense of dignity to the many cultures on this planet. The disproportionate compositions and elongated figures are meant to be a directional device for the viewer, my own natural inclination, and a challenge for the viewer to break away from the established fundamental belief that all children's books must be realistic or cute. I take chances with each project and do what is necessary to make the art interesting and unique."


Used with permission of Adaora Eigbobo.

Posted by Sylvia Vardell at 1:42 AM

you have really interesting blog. thanks for sharing

Anonymous said...
This comment has been removed by a blog administrator.
10:38 PM