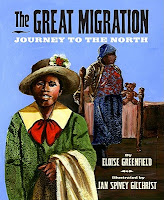 Two of my terrific graduate students created resources for Eloise Greenfield's latest work, The Great Migration. Gina Saldana made this digital trailer (below) and Annabel Moreno developed a readers' guide (further below). Check 'em out!

And here is the readers guide created by Annabel Moreno.

Recommended Age Levels
Student ages 3 to 10 in the 1st to 4th grade level.

Summary
In this compilation of poems with beautiful realistic illustrations, the reader is introduced to the causes, emotions and feelings experienced by African Americans as they made their decisions to relocate to the North in search of a better quality of life.

Review excerpts
Booklist (February 1, 2011) - “Greatly enhancing the impact of the words, Gilchrist’s moving mixed-media collages layer drawings, maps, and color-washed archival images that have the slightly distorted look of photocopies, giving some of the figures an almost ghostly, translucent appearance. Together, the immediate words, striking images, and Greenfield’s personal story create a powerful, haunting view of a pivotal moment in U.S. history even as they show the universal challenges of leaving home behind and starting a new life.”

Publisher’s Weekly ( November 22, 2010) - “Making intriguing use of photographs of people, news headlines, maps, and painted elements, each of Gilchrist's collages has a distinctive look and lighting, ranging from conventional portraits of the travelers to more abstract images.”

Questions to ask before reading
Before reading the book, students will be asked the following questions to tap on their background knowledge, lead to the reading of the book and build into the lesson.
ϖ By utilizing a U.S. map, ask the students where the North and the South is. Ask them to name some cities in the North and some cities in the South.

ϖ What does it mean to migrate? After listening to the responses, provide the students with the definition of the word migrate and use it in context to make the word relevant to the students.

ϖ What factors might prompt somebody to leave their hometown and move to another city? What would you do if you depended on your crops to survive and these were burned during a fire, or due to a lack of water they didn’t grow?

ϖ Have you ever migrated up north to work the fields and then come home after the season was over? Would you come back, if people mistreated you, or if you wouldn’t have money to feed your family?

ϖ Do you have any relatives that live in other cities in the north? Why did they move that specific city?

ϖ After discussing the questions above, give the students a brief synopsis of The Great Migration: Journey to the North to lead them into the story.

Suggestions for reading poems aloud
ϖ Book will be displayed over a document camera and will be read over a period of one week. Students will be divided into small groups and each group will be responsible for reading two poems.

ϖ As the poems are read, discussions will be held and students will analyze important elements within each poem, such as the troubled man who is conflicted about leaving his home in “Saying goodbye to the land puts pain on my heart.”

ϖ At the end of each class, students will vote for the best poem read during that class and will volunteer to act out the poem, as a culmination activity for the day.

History
ϖ Students will imagine living in the U.S. during the early 1900”s and will create a brochure to entice African-Americans to relocate to their city. Brochure must include elements such as housing and job opportunities, social and cultural elements of the city, as well as a description of the physical landscape and geographical features.
ϖ Students will receive an outline map of the United States and will label it with the migration routes followed by African-American during the early 1900’s.

Related websites
African-American Mosaic: A Library of Congress Resource Guide for the Study of Black History and Culture.
http://www.loc.gov/exhibits/african/afam011.html
This website is composed of an exhibit of primary documents such as letters from prospective migrants to African American churches, which assisted these migrants in finding housing and employment. In addition, the church also assisted many African American families in coping and adjusting to their new environment.

In Motion the African-American Migration Experience
http://www.inmotionaame.org/migrations/landing.cfm?migration=8&bhcp=1
This website provides a wealth of resources in reference to the Great Migration and other topics of importance in American History such as: the Transatlantic Slave Trade and Runaway Journeys.

Times is Getting Harder
Curtis, Lucious. 1940. “Times is Getting Harder”. Mississippi River Blues Vol. 1, Matchbox label reissue.
http://historymatters.gmu.edu/d/5333
This link includes lyrics to a song, Times is Getting Harder, recorded in 1940 by Lucious Curtis. This song details some of the hardships experienced by many African American families, which prompted them to relocate to the North in search of employment and a better life.

Related books
Fiction
Arnow, Harriette. 1976. The Dollmaker: A Novel. New York: Avon.
This is a story of a Kentucky family who leaves the beautiful Appalachian Mountains and relocates to Detroit, Michigan during WWII in search of employment and a better life.

Lawrence, Jacob. 1993. The Great Migration: An American Story. New York: Harper Collins Publishers.
This book describes the migration of many African Americans from the rural South in search of employment and a better life in the industrial cities of the North.

Nonfiction
Bausum, Ann. 2006. Freedom Riders: John Lewis and Jim Zwerg on the Front Lines of the Civil Rights Movement. United States: National Geographic Society.
This book describes the journey of two young men trying to achieve equality for all during the Civil Rights Movement in the 1960’s. The book includes photographs and accounts of the terrible consequences of continuing with the Freedom Rides in an attempt to end racial discrimination.

Wilkerson, Isabel. 2010. The Warmth of Other Suns: the Epic Story of America’s Great Migration. New York: Random House.
This book recounts the horrible experiences of African Americans in the South and details the abuses and punishments these were subjected to, and which ultimately led them to relocate to the North.

Zinn, Howard. 2009. A Young People’s History of the United States. New York: Seven Stories Press.
This book brings important elements of American History to life and presents viewpoints and the impact of workers, slaves, immigrants, women and Native American among others in American History throughout the years.


Used with permission of Gina Saldana and Annabel Moreno.

Posted by Sylvia Vardell at 1:41 AM