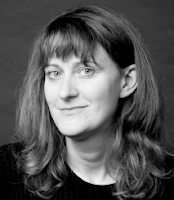 You’ll see from her web site, that new poet Jame Richards grew up a reader. She wanted to be an artist as a child, but was told there was no job market for artists. Then she read Otherwise Known as Sheila the Great and so began her reading life and eventually her writing life. In 2008, she received the Susan P. Bloom Children's Book Discovery Award for emerging writers from PEN New England Children's Book Caucus for the work that became her first published book, Three Rivers Rising (published by Knopf, 2010). It’s the story-in-poems of the catastrophic Johnstown (Pennsylvania) flood of 1889. It’s a fast read and compelling story, a Titanic kind of love story about star-crossed lovers from different classes set against an actual disaster that occurred in Pennsylvania near the turn of the twentieth century. It’s already been nominated for the ALA Best Fiction for Young Adults 2011 list and you’ll find a downloadable reader’s guide for the book on her web site.

Be sure to check out Jame’s blog, too. One of my favorite features is her regular column of adorable “Frances-isms” capturing the clever, intuitive ways that children express themselves with their evolving vocabularies vis a vis her own young daughter. One example is: "A rhombus is a rectangle in a hurry."

Jame will be one of our panelists at our upcoming NCTE session. She was kind enough to agree to a mini-interview. Here are her responses.

Can you tell us a little about yourself? Where you grew up? Your family? Where you live and work now?

I grew up in a small town in the Catskills along the Hudson River. My dad taught industrial arts at the high school and my mom coordinated an adult literacy program. I have two older sisters. Books were big in our house—every morning at the breakfast table was like an impromptu book club.

Because my dad was a teacher in our town, we had the same school vacations and used them to travel to just about every historic site, monument and museum in the great 48. I like to say I could walk into any restoration, slap on a bonnet and start carding wool…yeah, it gets into your blood.

I live in Southwestern Connecticut now and I like to torment my own two daughters in a similar manner. This summer we visited Hudson River mansions Wilderstein and Springwood, the FDR estate, what I like to call the Fala Tour. (Wilderstein was the home of FDR’s cousin Daisy who gave him Fala as a gift.) The next question is—Are they big readers like you were? You bet. They are happiest with a spilling-over armload of books. My husband, too, though he prefers nonfiction.

poet, I’m wondering what led you to write in this genre? To create a novel in verse, in particular? I read on your Web site that your mother giving you Out of the Dust to read influenced you greatly. Care to elaborate?

Among my earliest attempts at creative writing, poetry was by far most successful, but I kept hearing people say my poems were too long! And I was secretly wanting them to be even longer, to tell even bigger stories! The idea of writing one long poem—book length, let’s say—made me queasy, but I gradually became acquainted with the idea of writing self-contained vignettes like The House on Mango Street by Sandra Cisneros. I could write the essential scenes of a story, out of order even, and move them around later, which is how I eventually wrote early drafts of 3RR. Unfortunately, I still didn’t have a breakthrough until reading Out of the Dust by Karen Hesse. The style that comes naturally to me suddenly had an outlet, and all my writing quirks were permissible. So, the revelation was “Oh, now I know what to do!” 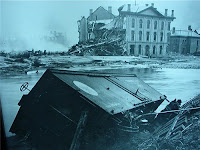 Can you tell us a little about the story behind Three Rivers Rising—particularly the research involved?
My interest in the Johnstown flood began at the age of my target audience: high school. A documentary about the flood kept me riveted for three days. I felt like the flood had happened yesterday—it was so vivid and immediate in my mind, I couldn’t understand how anyone was talking about anything else! After that I continued to feel like it was “my story” somehow and I kept an ear to the ground for any new information about the flood.

A few years later, as I was heading off to grad school for writing, I saw the documentary again on TV, purely by coincidence. I was struck by the juxtaposition of the ladies in white lounging on the boardwalks of the resort while the gritty steel mills chugged away in the valley below. I remember saying, “This needs a Romeo and Juliet story! This needs to be a novel!” The biggest break you could hope to get as far as research is if David McCollough wrote a book about your subject. After thorough readings of The Johnstown Flood, I had a springboard to start my own story. Then I could verify individual facts as needed. I found a nice new obsession in checking words for date of origin. “Loophole,” for example, sounds vaguely corporate and yet possibly Biblical… hmm, better look it up.

What can we look forward to from you next?
I have a number of works in progress including a middle grade novel—another historical in verse—set during WWII. Don’t want to jinx it though, so cross your fingers for me!

Any questions for Jame? Use the comments area (below) and I’ll gather them and see if Jame has a moment to respond. An autographed copy of her new book will be sent to a random commenter, so post please any time before the conference (Nov. 19)! And if you’re coming to the NCTE convention, you’re welcome at our Friday morning poetry session. Jame will be there!

Be sure to check out my fellow bloggers’ sites (Elaine at Wild Rose Reader and Tricia at The Miss Rumphius Effect) featuring fellow presenters, Lee Bennett Hopkins and Marilyn Singer.

Image credits: JameRichards.com; photoaccuweather.com
Posted by Sylvia Vardell at 9:35 AM

Thanks for this post. I am a big fan of Jame's book... also Sandra Cisneros's Mango Street. I love the efficiency of poetry and how compressed emotion has such power. I hope Jame writes lots more novels in this format, and I hope publishers continue to recognize these works as the jewels they are.

I loved Three Rivers Rising, Jame's words are so beautifully strung together poetry with a fictional voice.

Fingers crossed! I would love to read a WWII novel in verse from Jame!

Three Rivers Rising is the first novel in verse I've read. I approached it with trepidation and soon forgot it was poetry. It was that amazing.

Fancy the content I have seen so far and I am your regular reader of your blog.

I am very much interested in adding http://poetryforchildren.blogspot.com/ in my blog http://the-american-history.blogspot.com/.

I am pleased to see my blog in your blog list.

Hope to see a positive reply.

Thanks for visiting my blog as well !

Waiting for your reply friend !!!!!

Thanks to each of you for stopping by and sharing your comments. Alfred, I only link to writers of poetry for children-- but thanks for the compliment.