Although I served on the initial “shortlist” poetry panel for the bloggers’ Cybils award, I lost track of when the final decision was made. Oops! You’ve probably read it elsewhere, but I have to mention that Red Sings from Treetops: A Year in Colors (Houghton Mifflin, 2009) by Joyce Sidman was the winner.

The Claudia Lewis Award for Poetry was presented this week to Joyce Sidman for Red Sings from Treetops: A Year in Colors (Houghton Mifflin, 2009). This award is presented by the Bank Street College of Education in New York. This award is given for the best poetry book of the year for young readers. Claudia Lewis was an esteemed poet, author, teacher of children's literature and a faculty member at Bank Street College of Education.

The United States Board on Books for Young People recently announced its annual USBBY Outstanding International Books list of books that promote global understanding. There are two poetry titles on that list, both from authors outside the U.S. They are:
*Argueta, Jorge. Sopa de frijoles: Un poema para cocinar/Bean Soup: A Cooking Poem. Illus. by Rafael Yockteng. Groundwood. $18.95. ISBN 978-0- 88899-881-1. Canada.
This bilingual poem about making black bean soup offers a warm, culturally authentic portrayal of cooking and eating as a family affair. The Salvadoran poet’s lyrical language, in both Spanish and English, makes this book a great read-aloud.
*Herrick, Steven. Cold Skin. Front St. $18.95. ISbN 978-1-59078-572-0. Australia.
In a poor, post-World War II Australian town where nothing ever happens, Eddie and his father are at odds about working in the coal mines. When a classmate is murdered, everyone comes under suspicion. Multiple narrators guide readers through a series of twists and turns, keeping suspense high in this novel-in-verse. 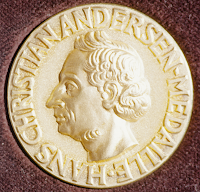 nal children’s literature, the International Board on Books for Young People announced the shortlist for the 2010 Hans Christian Andersen Awards this week. The prestigious biennial awards honors "a living author and illustrator whose complete works have made lasting contributions to children's literature." The shortlisted authors include THREE POETS: Ahmad Reza Ahmadi of Iran, Bartolomeu Campos de Queiros of Brazil, and Lennart Hellsing of Sweden. Other author nominees are David Almond of the U.K. and and Louis Jensen of Denmark. (I’ll be blogging more about this next Friday.) The illustrator shortlist consists of: Jutta Bauer of Germany, Carll Cneut of Belgium, Etienne Delessert of Switzerland, Svjetlan Junakovic of Croatia, and Roger Mello of Brazil. The winners will be announced on March 23 during the Bologna Children's Book Fair. I am on my way there now and will be sharing more news soon.

Image credit: ibby.org;usbby.org;cla.org;cybils
Posted by Sylvia Vardell at 7:05 AM

The Annual Bill Abrams Piñon Poetry Festival happens next week in Northern Nevada, sponsored by the Northern Nevada Writing Project for the past 20+ years. Students and teachers attend and publish poetry together at this popular evening event. This year's theme is COLOR & POETRY.

I followed this link to the website and their site has some really great resources on there for teaching poetry.
http://writingfix.com/poetry_prompts.htm#pinon