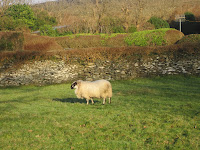 I had the opportunity to spend a wonderful week in Ireland traveling with my family in December-January. What beautiful country, what friendly people, if I may generalize. There are ancient ruins in nearly every backyard and 40 shades of green on the Dingle peninsula alone! I was also reminded of the rich literary tradition in Ireland (Oscar Wilde, George Bernard Shaw, William Butler Yeats, Jonathan Swift, Edmund Spenser, Thomas Moore, James Joyce, Ezra Pound, Padraic Colum, Samuel Beckett, W.H. Auden, to name a few).

One of my f

avorite books of poetry from abroad is a collection of contemporary Irish poetry for young people, Something Beginning with P edited by Seamus Cashman and I’ve blogged about it before (March, 2007). It’s a gorgeous anthology—for both its 100+ original Irish poems and for its sumptuous, iconoclastic art. A gift of this book of poetry was sent to every Irish primary school in Ireland, courtesy of RTÉ Radio in Ireland. Isn’t that way cool? Imagine!

So, I was on the lookout for more poetry for kids on this trip. Unfortunately, my time was so short and bookstore hours were so limited during this holiday time, that my options were limited. However, I was pleased to score a small book of Irish poetry in a shop on that famous Dingle peninsula (my favorite spot!). It’s A Child’s Book of Irish Rhymes compiled by Alice Taylor and published in Dublin in 1996 (Gill & Macmillan). [I have since found it published by Barefoot Books in the U.S. as A Child's Treasury of Irish Rhymes.]

f the poems are simple story rhymes for the young by Irish poets, but a few were by “Anonymous,” so I thought I would share one of those. Perhaps you’re familiar with it, but it was new to me. It’s a wonderful way for kids to explain away the whatever goes wrong. In my German household, we always blamed the “heinzelmaenchen”—elves or goblins. Here, it is “Mr. Nobody” who is responsible!

I know a funny little man,
As quiet as a mouse
Who does the mischief that is done
In everybody’s house.
Though no one ever sees his face,
Yet we can all agree
That every plate we break was cracked
By Mr. Nobody.

‘Tis he who always tears our books,
Who leaves the door ajar,
Who pulls the buttons from our shirts,
And scatters pins afar.
That squeaking door will always squeak
For—this is plain to see—
We leave the oiling to be done
By Mr. Nobody.

‘Tis he who brings in all the mud
That gathers in the hall.
‘Tis he who lets the front door slam,
And scribbles on the wall.
When we can’t find the scissors,
Or have lost the back door key,
The one to blame in every case
Is Mr. Nobody.

We know he cracked the window
And broke the china plate,
We know he left the kitchen floor
In such a dreadful state.
We know his faults and failings,
His sins are plain to see,
And so we always put the blame
On Mr. Nobody.

Isn’t this a great poem to read aloud? The second time around, when you get to the last line, pause before saying, “Mr. Nobody” and see if the kids will jump in and say his name. I predict they will! The poem would also be fun for kids to act out while you read it aloud, pantomiming the actions suggested in the poem—while wearing a blank paper plate mask with only two cut out eyes—as Mr. Nobody. Or perhaps they’ll want to draw each scene —graphic novel style —or sketch an image of what they think Mr. Nobody would look like.

There are many terrific contemporary Irish poets writing for kids today (in English and Irish). Here are just a few listed below. And what better month to check them out than March? 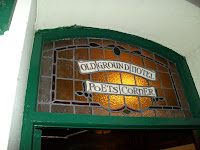 Danika is hosting the Poetry Friday gathering today at the TeachingBooks blog. See you there!

Image credit: O’Brien Press
Posted by Sylvia Vardell at 10:15 AM

Yes, Mr. Nobody, is reprinted in various anthologies I have read. It is a fun poem. And it is so true of kid's antics. Thanks for reminding me of it.

Thanks for your great suggestions. I'll look for the Irish poetry books for some classes I'll be teaching.

I am SO READY to travel to beautiful Ireland. Thanks for the armchair tour.

Mr. Nobody has been visiting our house for many years now.

Your Irish trip sounds wonderful. My husband and I would love to go to Ireland--maybe someday.

How fun to get to travel overseas and get to look for children's poetry books there--wish you had had more bookstore time, but I'm sure you had plenty to do!