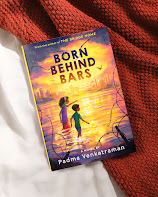 I'm so happy to share my blog space with award-winning author, poet (and scientist) Padma Venkatraman. You may be familiar with her novels, Climbing the Stairs, Island's End, A Time to Dance, and The Bridge Home. And she has a brand new just-released novel, Born Behind Bars. Here she writes about her journey to poetry and her struggle with how to format and categorize Born Behind Bars.
BORN BEHIND BARS:
PROSE, VERSE OR PROSE POEM?

After I completed my first draft of A TIME TO DANCE (years ago) I had a panic attack. I was trained as an oceanographer – what right did I have to write poetry? 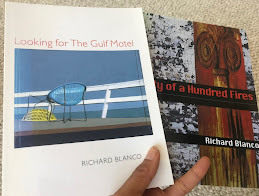 I’ve always loved poetry and read and listened to poetry, so I had a lot of poet friends and colleagues whom I could reach out to. Thanks to the encouragement I received from Richard Blanco, Gregory Pardlo, Scott Hightower, Rigoberto Gonzalez, and Kristin Prevallet, who visited the University of Rhode Island, and colleagues at the university, including Mary Capello, Peter Covino, Jody Lisberger and Talvikki Ansel, I persevered. 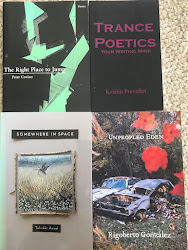 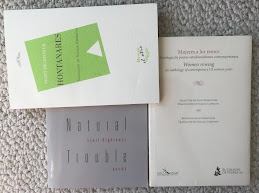 Peter Johnson, a poet who is also the acclaimed author of novels for young people (such as WHAT HAPPENED, and, most recently, SHOT), went the extra mile – literally. He drove over two bridges to meet me (and this is a huge deal in our little state of Rhode Island where the joke is that we pack a lunch or two if we have to drive across even one bridge). He gave me a pep talk and also a few copies of The Prose Poem: An International Journal, which he’d edited. 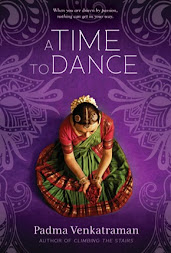 A TIME TO DANCE wasn’t prose poetry. I could hear dance rhythms in my head that I wanted to see on paper. I sensed that line breaks were vital to the telling of that story (about a dancer who meets with an accident where she sustains a below-knee injury, and who, as she recovers, discovers the spiritual depth of her art), and I agonized over line-breaks as I worked.

Yet, I was fascinated by the prose poem, too, as a form – and wondered if, some day, I might experiment with it.

As I created the first drafts of BORN BEHIND BARS, I realized that in my mind, I was seeing the text the way that prose poems are most often formatted: justified on both sides, and with an entire blank line in between paragraphs. In some way, this form, to me embodied and resonated the iron bars on the window through which my protagonist peers in the first scene of the novel. I love how the form of BORN BEHIND BARS augments the content, something I strive for in every poem I write.

Is it silly to be so much in love with the look of text on a page? Perhaps. But in my defense, I remember David Almond once talking about how he – if I remember right – went in and put spaces here and there in his text – because it looked better that way on the page.

Of course, story mattered to me equally as I revised, with attention to plot, and character and dialogue. 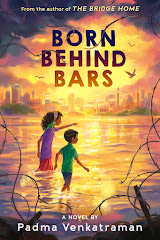 When BORN BEHIND BARS opens, the protagonist, Kabir, has lived in jail all his life. His only escape is through his imagination: he dreams of freedom, of exploring the world outside with his unjustly incarcerated mother. When he is suddenly released, he clings desperately to the hope that he can set her free, although society is prejudiced against him because of his poverty and low caste. His longing to see justice done drives his actions – and as I wrote, I kept thinking of these beautiful Langston Hughes lines – Hold fast to dreams/ For if dreams die / Life is a broken-winged bird / That cannot fly.

The lines I was placing on the page resembled the tangible hurdles Kabir faced, but his songs slipped past them the way a songbird’s voice cannot be contained by the bars of its cage, and Kabir’s dreams filled the white spaces among the lines. Poetry and prose began to blur, and Kabir’s story took shape on the common ground between them. I’ve always thought of white space in a poem as a place that is sacred – the space where the poet meets the reader – the spiritual plane, in a sense, that they share together. I’ve always thought of stories as half-bridges – a similar metaphor – because each story is only half-written, even when it is completely written, in that the reader must finish it in his/her/their own way. My readers are my co-creators, working with me to re-create each story, each poem. Although my name may be associated with a piece, each time it’s read, the reader makes something new out of it – and in each reader’s mind and heart, is a creation that not even I, who wrote the novel or poem, can ever fully comprehend. This, to me, is the magic of story. And in poem, those spaces are a vital invitation to the reader to enter into a deep, vast, emotional and imaginative landscape.

As I revised BORN BEHIND BARS, I paid attention to the poetic quality of each chapter, each paragraph, each line – the way that a prose poet should. Poetic techniques such as compression, fragmentation, repetition and rhythm were at the forefront of my mind, although I also wanted, equally, to ensure that every bit of dialogue felt natural and that the narrative voice was true to that of my child protagonist, Kabir. 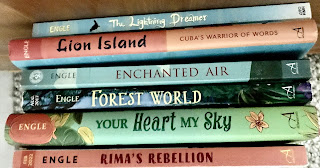 When I was done, I asked Newbery Honor winner and Young People’s Poet Laureate emerita Margarita Engle whether she thought BORN BEHIND BARS was a poem or prose, or a prose poem. A prose poem is a hybrid form, she said, suggesting to me that people were likely to classify it one or the other. She seemed to agree with me that it was. My beloved editor Nancy Paulsen said she felt the voice had a fable-like quality to it, but that it wasn’t a prose poem. 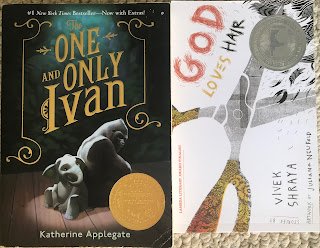 An educator recently observed – to my delight – THE ONE AND ONLY IVAN also has the same look and is formatted the same way. So, one thing is certain. If indeed BORN BEHIND BARS is a prose poem, it’s by far not the first prose poem written for young people. THE HOUSE ON MANGO STREET could be considered a prose poem. So could GOD LOVES HAIR.

Peter Johnson defines the prose poem as a form that can straddle the fine line between comedy and tragedy: “the prose poem plants one foot in prose, the other in poetry, both heels resting precariously on banana peels.” But perhaps the academic definition of a prose poem isn’t as important as the fact that I absolutely love everything about the way that BORN BEHIND BARS turned out, down to the last detail of formatting the text!

Posted by Sylvia Vardell at 4:35 PM

I loved this book so much that I read it in one sitting. That only happens to me (with a novel) about twice a year! Such beautiful writing and compelling characters: WOW, Padma! Another winner!!!

I love Padma's novels! I'm looking forward to reading this one. Thank you for sharing it here, Sylvia!

I am so looking forward to reading this novel! Padma's writing is so intensely poetic that when I read THE BRIDGE HOME, I was on chapter 3 before I realized it wasn't a verse novel. Just gorgeous. Thank you for sharing your journey and poetic insights, Padma!

I could do relate to so much of this about the precision of placement of words in the page. And the questions about classification. Loved hearing Padma's perspective and looking forward to reading this. Thanks for sharing, Sylvia.

Looking forward to reading this and to learning from Padma in an upcoming workshop. Thanks for this behind the scenes look at the structure behind the story!

Looking forward to this book!

Love Love Love (and I also get to hang out with the amazing Padma now and then, living close by in New England, so how lucky am I!)