I'm thrilled to feature professor and author Chris Baron in a guest post about his latest novel in verse, The Magical Imperfect. Here, he shares a few poems that were NOT included in the book, along with a bit of backstory. I love how this gives you a bit more insight into the characters. See what you think!
Chris writes: 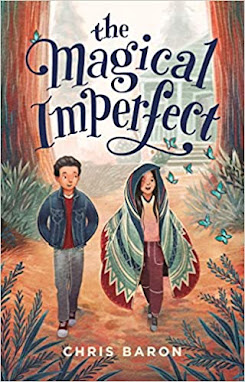 Every book is a new experience. Writing The Magical Imperfect forced me to develop new and practical strategies for drafting.  The story is full of so many complex layers, intergenerational relationships, faith, magic, chronic illness, the sacred, baseball, earthquakes, and so much more! Writing this story stretched me in every possible way as a writer, researcher, father, and husband… but it’s been worth it. And as in any manuscript there are poems (literally thousands of words) left out…

Here are a few poems that I absolutely loved, but that didn’t quite fit with the story in its current form.

Etan, as an artist, is a huge part of the story. I wrote a lot of poems about his artwork. While I like the poem so much, it didn’t fit or move the story as it needed to.

so it makes perfect sense

on a thirsty July morning

to wet the tip of your finger

and smear the wax

what you need it to be,

to quickly draw a container

to hold the juice before

it runs out over the page

And of course, BASEBALL!  So much of the book is wrapped up in baseball and friendship. The friendship between Etan and Jordan was very important early on. They grew up playing baseball together, and in early drafts of the book, Jordan moved away.  But the character of Jordan changed A LOT. This is often the hardest part of creating stories… when we love characters and their relationships, but then we have to transform them into something else. This short poem didn’t make it in, but it helps deepen the empathy for Etan and his life as an outcast as we learn about how his friend moved away. I think we can all relate to the way this feels.

The day after Jordan

we went to his house

to help him pack.

Do you think they’ll have baseball

at your new school? I ask.

No, they have swimming.

I’m supposed to start that.

Why do you have to move there at all?

to where my father's Law firm is.

We finish our cokes.

You can visit me, Etan, in the city?

Then we kept packing

how hard it would be.

Writing about Malia was complicated. Eczema is very complicated. For people who haven’t experienced it--it can be difficult to understand. Most people have rashes that itch, but as my wife explains it, she has “itches that rash.” Ella has suffered from extreme eczema off and on her whole life. Her memoir, Itchy Brown Girl Seeks Employment (2009) is about a life lived with this skin disease. It’s something we know well. It’s something we don’t learn about often enough in books.

In The Magical Imperfect, Malia suffers a similar flare-up of eczema. It’s so bad that she is isolated from school because of the way other kids treat her--calling her “the creature.” But it’s really about her own discomfort. I wrote numerous poems about Malia dealing with her eczema. I wanted to make sure that in some way, her actions and reactions would be true and help be a window and a mirror for readers. But of course, not every word makes it into the book! Much of this poem is in there, but there are more severe versions like this one… 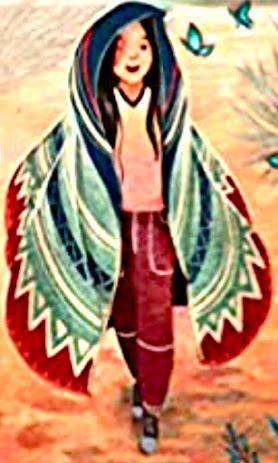 I look at Malia,

and I notice something

I hadn’t seen before.

the arm inside her blanket

and blood is coming through.

I never realized it

because it’s been hidden

but I can see the way

This last poem is part of a HUGE group of what I named “The Golem” poems.  (maybe a picture book one day)! One of the core themes of the book is that, “you are not alone.” I wrote chapters about the golem being born and immediately running away and hiding scared and feeling alone until Etan and Malia start to try to connect with this being they brought to life from ancient clay..  Obviously, this didn’t fit within the limits of THIS book, but here is a taste of that alternate world where maybe it might have.

Somewhere in the forest

in his muddy hands

on the sitting stones

When Etan and Malia

come to sing and draw

they find the stones

deep into the muck

of not two, but three friends

sitting together on the stones.

Malia sings in the warm afternoon

when the shy and swirling light

of bright and watery eyes

will come up from the mud

Thank you, Chris. This is so moving, fascinating, and powerful. I love the added layers that these poems give us in reading The Magical Imperfect. I hope we see that Golem picture book one day, too. Thanks so much for sharing these poems and this glimpse with us.

Now, head on over to Unexpected Intersections where Elisabeth is hosting Poetry Friday.

Wow! I'm going to order this book. Thanks for sharing!

Thanks for sharing these poems, Chris!

I loved The Magical Imperfect & enjoyed reading more of your thoughts about it and the "extra" poems that might have been. New Friend makes me want that picture book: "Etan leaves drawings/of not two, but three friends/sitting together on the stones." Thanks for a lovely post and book!

Oh - I love that this post gives life to poems that didn't make the cut. Because I have a few of them! Wonderful insights here.

Thank you Sylvia for this interview, and Chris for this added insight into the book and your creative process. It's like the poetic version of "deleted scenes with directors commentary" on a film.

I appreciate this reminder that there probably always need to be more than what ends up in the final version to accommodate pruning--I find it so hard to let anything go! Thanks, Chris, for sharing, and thanks, Sylvia, for bringing Chris to the party this week!

Now, I'm looking even more forward to reading The Magical Imperfect, which is a great name! I enjoyed reading the extra poems and learning about the characters. The poem about the Golem makes me want to read more. Thank you both for sharing.

Thank you Sylvia for a great interview with Chris. Now, I'm looking even more forward to reading The Magical Imperfect, which is a great title! I enjoyed finding out about the characters through the extra poems. I was intrigued about the Golam poem and want to read more.