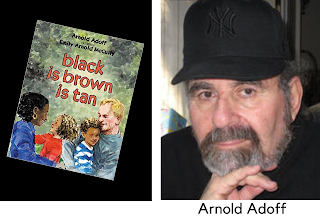 Poet and anthologist Arnold Adoff died last week at his home in Yellow Springs, Ohio at age 85. As Shannon Maughan noted in his obituary in Publishers Weekly, Arnold Adoff was "widely noted for his inventive poetry style and for depicting the African American experience in his work" and published more than 30 books for children and young adults and received the National Council of Teachers of English Award for Excellence in Poetry for Children in recognition of his body of work in 1988. And that body of work is wide-ranging, socially conscious, personal and engaging, rich and creative in its use of language, and playful with poetic forms. Here's just a sampling I pulled from my own bookshelves: 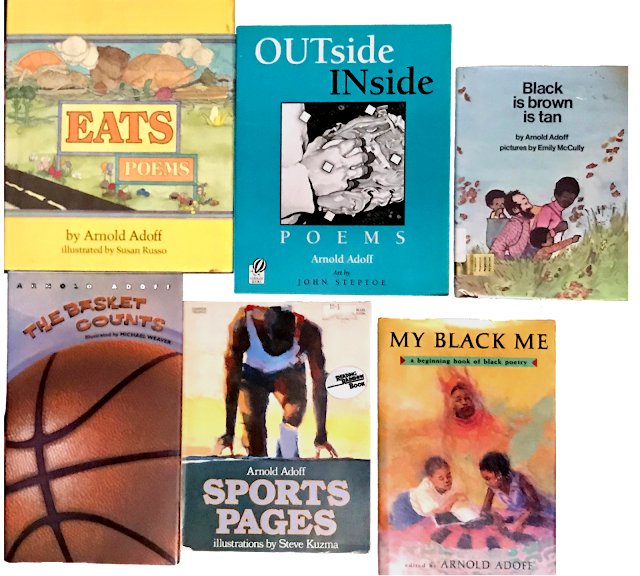 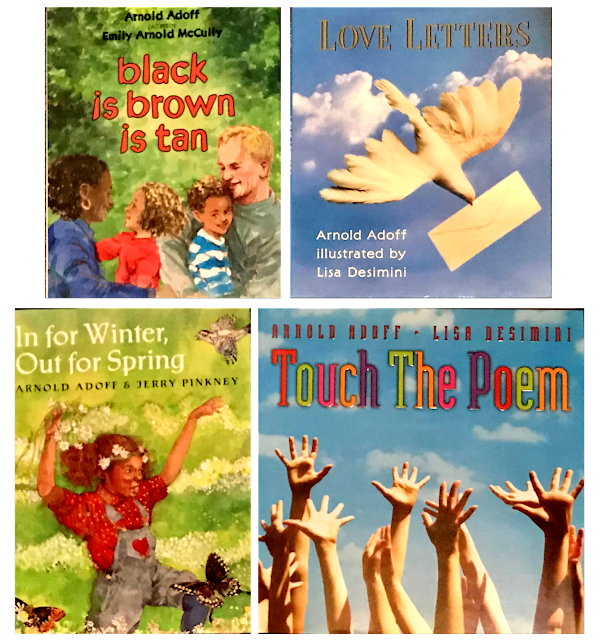 Maughan goes on to observe:
"Adoff had begun collecting Black literature in the late 1950s, and that pursuit dovetailed with his observation that the ethnically diverse students in his classrooms were exposed to racist textbooks and didn’t have access to books and magazines that accurately reflected their experiences. Wanting to address that, he shared his favorite poems and works by Black writers with the kids. Once, Adoff recruited a friend—an editor at Macmillan—to make photocopies of some poems so he could distribute them to his class. The friend was impressed by the selections and suggested Adoff meet with the editor-in-chief about turning them into a book. The result was his first anthology, I Am the Darker Brother: An Anthology of Modern Poems by Negro Americans, published by Macmillan in 1968. Of his passion for curating collections like this one, Adoff told Something About the Author, 'I want my anthologies of Black American writing to make Black kids strong in their knowledge of themselves and their great literary heritage—give them facts and people and power. I also want these Black books of mine to give knowledge to White kids around the country, so that mutual respect and understanding will come from mutual learning. We can go beyond the murders and the muddles of the present.'"

His anthologies, I Am the Darker Brother and My Black Me were particularly pivotal for my own reading of African American poets for young people. I wrote about this on my blog ages ago in this post: I AM THE DARKER BROTHER. He also impressed me with his unique approach to form with very little punctuation and generous spacing which he called “shaped speech.” And hearing him read aloud from his work was always a powerful experience with his staccato rhythms and distinctive gravelly voice. I have a previous blog post that features a 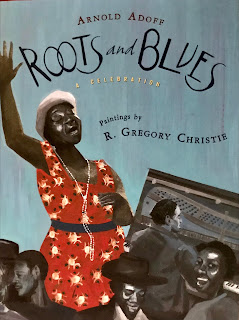 Video of Arnold reading from ROOTS AND BLUES. In this talk, he also advocated for reading any/every poem three times:
I love how he encourages us to dig into the layers of poetry!
I think Roots and Blues: A Celebration was one of his last published works and it was critically acclaimed and won multiple awards. One of my students created an in-depth readers' guide for it that you might find useful. It's here:
ROOTS AND BLUES: A CELEBRATION-- A Reader’s guide.

Janet (Wong) and I were lucky to collaborate with Arnold on several projects-- he was always generous in contributing a poem and helping us spread the word. Here's one poem he wrote for one of our Poetry Friday anthologies that shows you his distinctive approach. 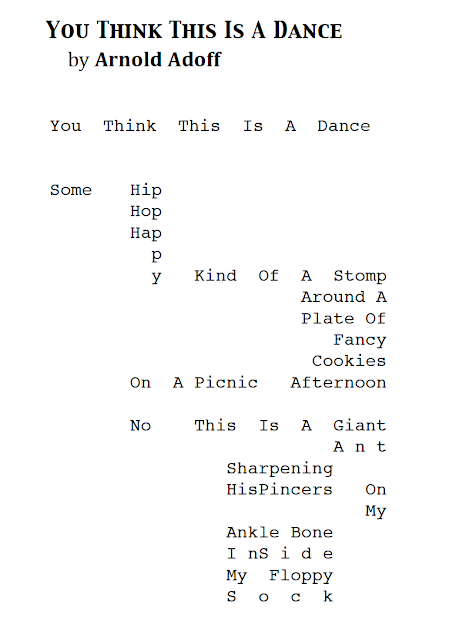 Arnold Adoff was a passionate poet and anthologist and also a kind and generous soul. He was devoted to his wife, Virginia Hamilton, a major figure in children's literature with multiple awards including the Newbery Award, Andersen Award and even a MacArthur "genius" grant. Arnold's son, Jaime Adoff has published several works of poetry for young people himself. Arnold was active on social media and I always appreciated his lifting up of social justice issues and celebrating the work of others. He will be missed, but his spirit lives on in his family and friends, and in the beautiful work he leaves behind.
The lovely Irene Latham is hosting our Poetry Friday thoughts this week, so head on over to Live Your Poem... and promise me that you'll seek out a book by Arnold Adoff soon!
Posted by Sylvia Vardell at 5:00 AM

I have so many great memories of Arnold Adoff from time spent together at conferences. One of my favorite pieces of his writing was a short piece of prose called something like "How I Became a Vegetarian." It wasn't ever published as a book, but was simply (to my knowledge) the final piece in a wire-bound cookbook anthology tribute to Virginia Hamilton (commemorating many years of the Kent State conference in her name). It was a great piece of storytelling. One day (soon?) I'll organize my bookshelves and find it!! Thank you for this post on Arnold, Sylvia!

Thanks so much for this wonderful tribute to Arnold and his work. Was saddened to learn of his passing.

Thank you for introducing me to this poet. I am just delving into the world of poetry so he is new to me. I promise you I will seek out one or more of his books. My mom taught 3rd grade for 30 years and often wrote poetry, as well as teaching it to her classes. I will ask her about Arnold Adoff, as well. Thank you, again.

Thank you for this tribute, Sylvia. I have Sports Pages and I Am The Darker Brother, used some of his poems with students, and another that is rather quirky & fun that I have is Chocolate Dreams. I'm sad for his passing.

What a lovely remembrance of a kind and loving person. I didn't know a thing about his background but have Roots and Blues in my library and love it. I'm also struck by the advice to read a poem three times. Thank you for sharing this tribute to Mr. Adoff. He really has changed our world for the better. An inspiration.

Oh, WAH! I hadn't heard that he had passed. He and Virginia were such forces for good in the world of children's books and poetry. Thanks for this wonderful tribute.

Oh, I missed this announcement! (Which makes me sad, because you know who would have let me know...dear Lee.) I'm so sorry to hear it. I loved the way Arnold presented on the page--he made such an important model for young writers in so many ways. Thank you for this, and for making me feel like I met him (which I never did).