Poetry among the ALA Awards

I was in Philadelphia last year for the American Library Association midwinter conference and was in the room on Monday when they announced all the big awards-- such a fun, electric morning! And as usual, I like to celebrate the works of poetry that are among the award winners. So, here you go: 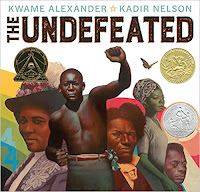 John Newbery Medal is given to the most outstanding contribution to children's literature.
Newbery Honor Books:
The Undefeated by Kwame Alexander, illustrated by Kadir Nelson (Versify/Houghton Mifflin Harcourt)
Other Words for Home by Jasmine Warga (Balzer + Bray/ HarperCollins Publishers)

Randolph Caldecott Medal is given to the most distinguished American picture book for children.

Odyssey Award goes to the best audiobook produced for children and/or young adults, available in English in the United States. 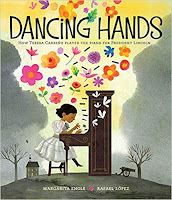 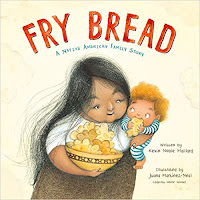 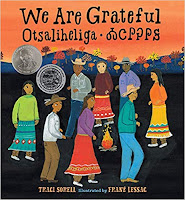 The American Indian Youth Literature award is announced in even years and established to identify and honor the very best writing and illustrations by and about American Indians. The award is administered by the American Indian Library Association (AILA), an affiliate of the American Library Association.
Picture Book Honors:
Fry Bread: A Native American Family Story by Kevin Noble Maillard (Seminole Nation, Mekusukey Band), illustrated by Juana Martínez-Neal (Peruvian-American) (Roaring Brook Press/Macmillan)
We Are Grateful: Otsaliheliga by Traci Sorell (Cherokee), illustrated by Frané Lessac (Charlesbridge)
At the Mountain’s Base by Traci Sorell (Cherokee), illustrated by Weshoyot Alvitre (Tongva/Scots-Gaelic) (Kokila/Penguin Random House) 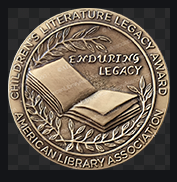 [This one is NOT poetry, but I have to include it, because this is the award committee that I was fortunate to chair this year. I had a lovely committee and we are so pleased with our choice.]
Children’s Literature Legacy Award honors an author or illustrator whose books, published in the United States, have made, over a period of years, a substantial and lasting contribution to literature for children through books that demonstrate integrity and respect for all children’s lives and experiences. The 2020 winner is Kevin Henkes, whose award-winning works include Kitten’s First Full Moon which won the Caldecott Award in 2005 and The Year of Billy Miller, recipient of a Newbery Honor in 2014. In addition, Henkes has received two Geisel honors, two Caldecott honors and a second Newbery honor.

Now head on over to Jone's place where she is gathering all the Poetry Friday goodness.
Posted by Sylvia Vardell at 12:30 AM

Huzzah for all of the poetry! And Kevin Henkes was a PERFECT choice!!

What a wonderful list of book to add to my TBR pile!

Such a delight to see you round up all the poetry winners for us in one spot! I've been on the holds list for months for a copy of Fry Bread. Maybe it's time to go to a bookstore to read this one! And I've set out my unread ARC of Ordinary Hazards to begin when I finish the book I'm currently reading. Hurray for Kevin Henkes and his marvelous books!

These are all on my TBR list. What a wonderful group of books. And Kevin Henkes was an excellent Choice!!!