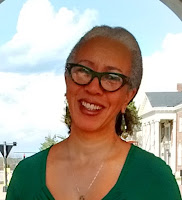 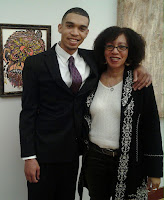 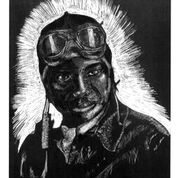 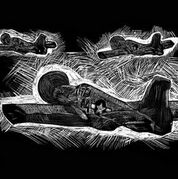 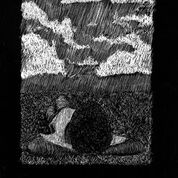 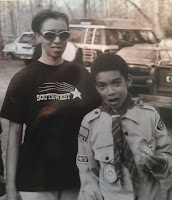 Posted by Sylvia Vardell at 8:57 AM

I was born during WWII & my father was a pilot, lost in a battle in the Philippines so I have read many kinds of stories through the years of the pilot's experiences, including the Tuskegee airmen. Love the idea of this book, and the scratchboard illustrations that you shared. Looks like a wonderful book about these brave men. Thank you!

Another fascinating history / poetry combination! Thanks for highlighting this book, Sylvia. I love it when poetry and history come together in this way.

Hi, Linda and Violet, and thanks for stopping by. And thank you for sharing your story, Linda, and your dad's brave sacrifice. Carole's book really captures the heroism of these WWII pilots too-- never sentimental, always very personal and powerful!

Some of my family was lost in WWII, and we need to always remember not to head there ever again. All it takes is one vastly crazy man and one angry nation. I love LOVE the illustrations. What a talented young man. I will have to read this one.

How wonderful to witness what (hopefully) will be the first of many mother/son collaborations. This looks fabulous -- I'll watch for it!

I have enjoyed Carole's work, too. I live about 45 minutes from Tuskegee and have always loved their story. So glad to see this collaboration.

Ordered the book from the library. Can't wait to read it. WEATHERFORD POWER!

September
3   Heidi at my juicy little universe
10 Tricia at The Miss Rumphius Effect
17 Denise at Dare to Care
24 Laura at Laura Purdie Salas
October
1   Catherine at Reading to the Core
8   Irene at Live Your Poem
15 Bridget at wee words for wee ones
22 Jama at Jama's Alphabet Soup
29 Linda at TeacherDance
November
5   Tabatha at The Opposite of Indifference
12 Matt at Radio, Rhythm & Rhyme
19 Carol at Beyond LiteracyLink
26 Ruth at there is no such thing as a God-forsaken town
December
3   Michelle at Michelle Kogan
10 Cathy at Merely Day by Day
17 Jone at Jone Rush MacCulloch
24 Buffy at Buffy Silverman
31 Carol at Carol's Corner