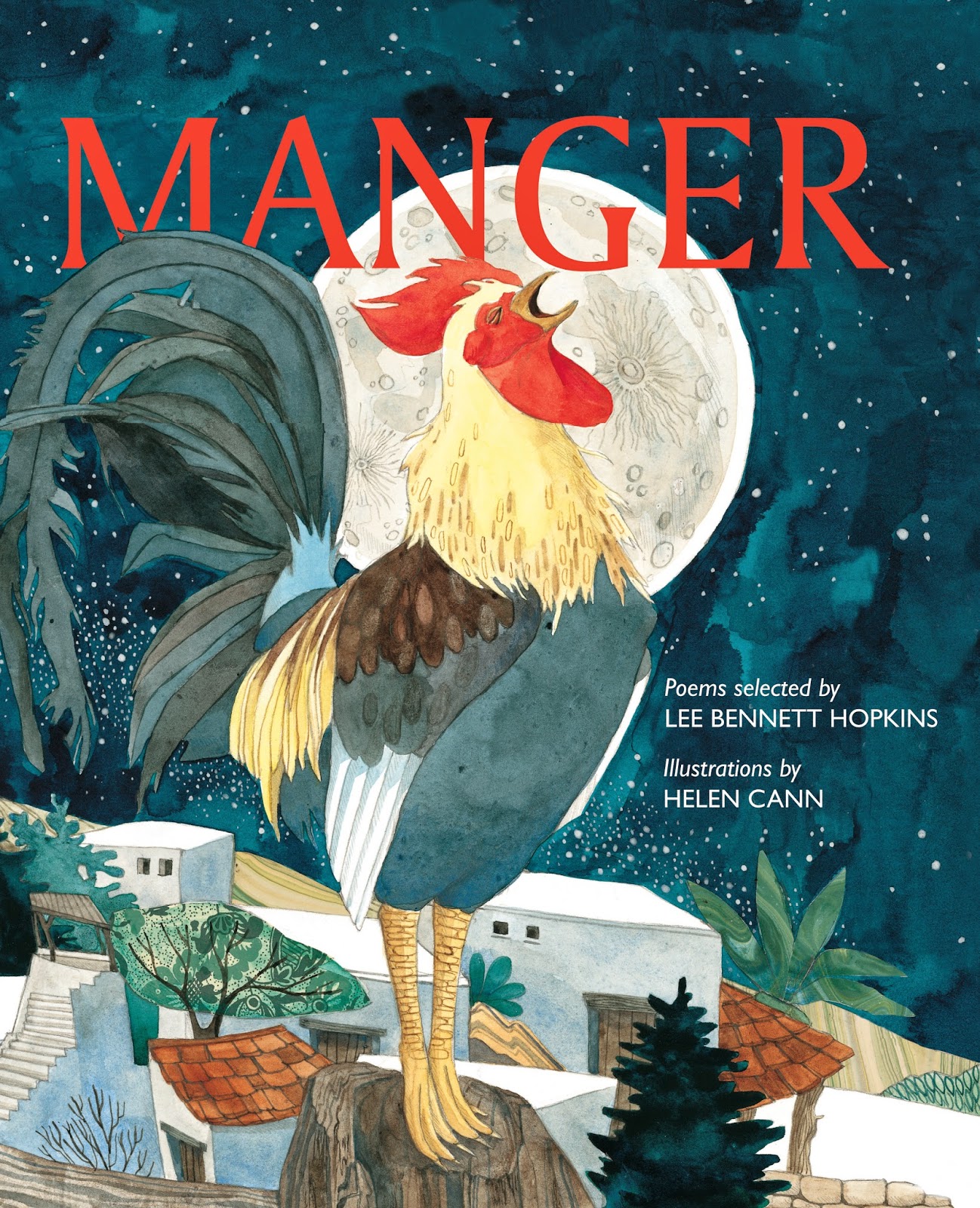 At my house tomorrow it is Nicklaus Day (St. Nicholas Day) and we celebrate with stockings and treats—a fun preview of the Christmas celebrations to come. It’s a perfect moment to celebrate a new book from Lee Bennett Hopkins, Manger (Eerdmans, 2014). Beginning with gorgeous endpapers, we journey through fifteen beautiful double-page spreads each featuring a lyrical poem from an animal’s perspective about the arrival of Jesus as a baby in the manger. Beautiful pictures, beautiful poetry, beautiful moments to savor. And it’s not just an artful, contemplative book, it’s also very child-friendly, perfect for sharing with a little one on your lap or with a group of kids sitting around you on the floor.

As a gift to you, here is my free mini-guide for Manger for sharing this special book with the children in your life.

1. There are fourteen different animals presented in this book:
This just begs for dramatic interpretation, beginning with making, finding (online), and recording animal noises and pictures. Or gather or create simple puppets or masks for each of these creatures (with paper bags or paper plates) to use as you read each animal poem aloud. You can also find coloring pages here or use the animals featured on the end pages of the book. Then read each poem aloud using the animal sounds to start or end the reading—inviting the kids to make those sounds with you. Use your animal puppets or mask to “tell” the poem, too. Then display the animal pages or puppets along with the book. (For younger children, you may also have to explain what a "manger" is and what it looks like.)

Older children may enjoy creating their own poems that add animals to this mix. What other animals might be present in this barn setting? Hint: there are a few animals pictured in the endpapers and in the illustrations that are NOT represented with their own poems. See if the kids can figure out which ones (e.g., rabbit) and challenge them to create a poem for that animal. How might each of those animals react to a baby’s birth or to this special night? What unique animal attributes might be incorporated into the poem? Point out to your young writers that some of the poems in Manger rhyme and some do not, so they can experiment with creating their poems rhyming or free verse. In addition, note that the final poem in the book is an excerpt from a traditional Christmas carol. So, that’s another approach to try—looking at familiar Christmas songs that include animals and choosing a stanza or stanzas as stand-alone poems.

Finally, link this book with others that feature Christmas poetry, expecially Mary’s Song, also by Lee Bennett Hopkins. Here’s a sampling of poetry books about Christmas from my book, The Poetry Teacher’s Book of Lists:

And if you participate in a living nativity scene at your church or in your community, considering adding these animal characters and reading the poems from Manger as part of the performance.

Lee was also kind enough to answer a few questions for me. He also shared the photo here and notes: "This photo is with my younger brother, Donald, visiting Santa Claus in a Newark, NJ department store. The photo is reproduced in LEE BENNETT HOPKINS: A CHILDREN'S POET by Amy Strong (Franklin Watts, 2003)."

What are some of your most vivid memories of this holiday from your childhood?

My younger sister, younger brother and I grew up with a single-parent mother after my father left us. We never had much money but we saved to buy each other what gifts we could afford. I remember one year I saved to buy my mother a musical powder box from Woolworth's five-and-ten-cent store-- our Tiffany's! I brought it home. Mother was scrubbing the floor. I almost slipped. As I caught myself the music began to tinkle through the bag. I wanted to die. I so wanted this to be the biggest surprise for her. Mother pretended she didn't hear it, but I knew she did. Funny -- a powder box memory-- a gift to a hard-working woman who did what she could to make us happy.

Did any of these memories inform the creation of this book (Manger)? How?

We always had a manger at Christmas. Shockingly we had an over-abundance of manger figures! At one time Mama worked at Woolworth's in Newark, NJ. I describe the scene in my first novel, Mama (Boyds Mills Press) and how so many figures appeared including eighteen Wise Men. In essence I was a young fence.

What are your favorite Christmas holiday traditions that you continue today?

Christmas present has become lush and love-filled. Our house is decorated to the hilt. It is a time when we hold a large gala, a special evening with family and friends each December. Songs are sung, poems are shared, and prose about Christmas is read.  This year Manger will be read; afterwards "Away in a Manger" will be sung by all.

What do you wish for Christmas poetry future?

There is so much traditional Christmas poetry: words in favorite songs; words in favorite hymns. It is a time for "Sleigh Bells," hope for a "White Christmas," and warm thoughts of a "Silent Night,' an "O Holy Night."  This year, many children will be introduced to new poetry via Manger by some of our top poets writing today including Marilyn Nelson, X. J. Kennedy and Joan Bransfield Graham. A special guest will be Jude Mandell who will read her poem "Curious Cat" from the book.

With the publication of Mary’s Song and Manger, you have quite a lovely duo. Are there any plans for more poetry focused on the nativity or Christmas?

I hope so.  I am working on a manuscript about the Magi as well as more Christmas poetry presents for the future.

Merry Christmas to all of you who celebrate this special time. And happy holidays to everyone enjoying this season of giving.

Now join the rest of the Poetry Friday crew over at Anastasia's place. See you there!

Posted by Sylvia Vardell at 1:09 PM

Sylvia and Lee, thank you. This is a beautiful tribute to a gorgeous and meaningful book. (Now I want to act it out!) Lee's photo and childhood memory make me smile and cherish these days. I will be linking over. xo, a.

Thank you, Wise Woman Sylvia for broadcasting the news of Manger. May this book enrich many children's ears!

SYLVIA: How do I thank thee? I cannot count the ways. My love-ness. Lee

Great post, Sylvia! So many wonderful resources!!! Thanks for sharing it! :-)

I don't know how I missed this last week, but I'm delighted to read a little more about this gorgeous new collection. Hats off to Lee for sharing another perfect celebration, and to your feature, Sylvia!