It's hard to believe kids and teachers (and librarians) are heading back to school already! In honor of that big transition, here's a new poetry postcard featuring a fun "back to school" poem by new poet, Terry Webb Harshman. 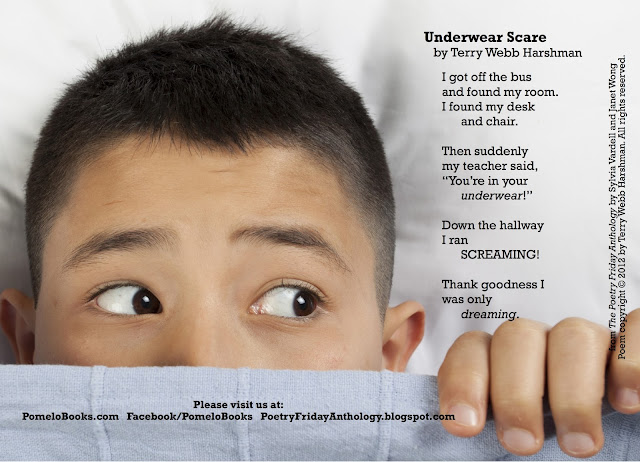 This is one of the new "printables" featured at Pomelo Books and available here. Each poem comes from our Poetry Friday Anthology series and each book begins with two weeks of back-to-school poems for every grade level, K-5; 6-8.

For more school-themed poems, look for the following list in my book, The Poetry Teacher's Book of Lists.

Poetry Books about School for Children: Children often particularly enjoy poetry about school since most of their daily lives are spent there. The ups and downs of classroom life make fine grist for both humorous and serious poetry. Look for these books of poems about school and share them throughout the school year. (Some are out of print, but may be available on library shelves or via your favorite "used book" provider.)

For more info, check out the blog for this "list" book here.

Now head on over to NoWaterRiver where the fabulous Renee La Tulippe is hosting Poetry Friday this week!

Posted by Sylvia Vardell at 9:04 AM

Great list, & I know the poem, but didn't know about the printable of it! What fun! Thank you!

This poem is a riot! Perfect for easing those back-to-school jitters. Thank you for the great list of poetry books, too. My list just got longer!

Thank you for sharing this. Your timing is perfect. The jitters have just arrived at our house.

This poem is so much fun. I can't wait to share it with my students. How did summer go by so fast?

Thank you for this marvelous list! And the poem is perfect to hang on my wall the first week of school....my sixth graders will appreciate the giggles.

The poem and list are timely for us, also. My daughters went back to school over a week ago!

I hadn't known the work of Terry Webb Harshman before Rebecca Kai Dotlich connected us with her for our first Poetry Friday Anthology--but I'm so glad I know her work now. All of her poems have tremendous child appeal!

I hope this poem doesn't plant a subliminal message to my brain that I need to start having similar TEACHER'S back-to-school nightmares...

Thanks for the great list. I recently read a picture book collection of poems by Amy Schmidt called DOG-GONE SCHOOL (Random House, 2013). The poems, in a variety of formats, follow a day-at-school trajectory and are accompanied by adorable photos of canine students.

Thanks for the great resource list! And what a great poem too. I think I'll print copies to stick in my children's lunchboxes on Monday, their first day back.

What a great list. I also love the new postcard!