NCTE and my Pink Poets

As many of you know, I was all set to attend the annual convention of the National Council of Teachers of English in Las Vegas two weeks ago and then had to cancel at the last minute. Such a disappointment after not missing this wonderful conference for nearly 30 years! But my presentation panel forged ahead without me and did a wonderful job! Headed by the amazing and generous, Janet Wong, who videotaped the entire session, along with Amy Ludwig VanDerwater, Laura Purdie Salas, Lesléa Newman, Irene Latham, and Mary Lee Hahn, the audience was treated to each poet talking about her work and creative process in the session entitled, "Theme – Collect – Excite: Where Do Poems Come From?"

And in case you missed it, they also ALL WORE PINK in my honor-- as a tribute to my fight with breast cancer (which is now done, thank you very much!)-- the sweetest gesture ever. Here's a picture of them (along with Janet Fagal who also helped out). These ladies are rockin' the pink, don't you think?! They were even featured in Publishers' Weekly last week! 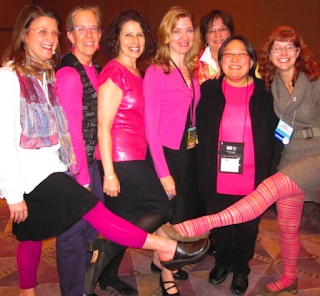 I would also like to share just a teeny clip of each poet from the video that Janet captured of the session. It's always a treat to hear the poet speak and read her work aloud-- I never get tired of that. So, sit back, relax, and enjoy these juicy tidbits.


Each of these poets has published her own work as well as poems featured in The Poetry Friday Anthology that Janet and I edited and published in September.  What a talented crew, don't you agree?!

Janet told me to post this disclaimer too :-)
"Janet apologizes for the poor visual quality of these videos and asks you just to imagine that it is 1967 and your TV set's antennae just won't work, even with their little balls of tin foil . . . oh, well: please enjoy the show!"

Now head on over to the Poem Farm hosted by the very same Amy Ludwig VanDerwater (featured above).   See you there!

And don't forget to enter our poetry e-book giveaway (which ends Dec. 12). Details below.

An apology for the fuzzy visual quality of these videos; pretend that it is 1967 and little balls of tin foil on your TV set's antennae would crisp up the picture . . . but you just ran out of tin foil. (Enjoy "the show" anyway!)

Love this post. Love seeing and hearing all the poets (now friends) read their poems and talk a bit about their process. Poetry videos can be fuzzy like poems can be fuzzy.....wraps us in a comfy cloud of the best kind of fogginess, makes us peer more intently and listen harder, I think!! So glad Sylvia got to enjoy from afar. And how lucky for the winners of copies of the Poetry Friday Anthology Pomelo Books donated and also Janet's kind offer of The Poetry Teacher's Book of Lists which Peggy O. won!! I was so happy to be there and be a part of the session. Janet F.

I always enjoy hearing poets read their own work and discuss the writing process. Thank you for posting these videos!

Oh, do these Pink Ladies rock or what?! This was the next best thing to being there - thanks, Janet (60s-TV-quality was fine!) and Sylvia for sharing.

Prettiest of pink poets ever! Thanks for sharing these video clips. Happy to hear you got the "all clear," Sylvia!

Wishing you a speedy recovery, Sylvia.

Whoopeee! Thanks Sylvia for posting Janet's videos. It was so much fun to hear the poets read their work and to learn a little about the background of the writing-- almost as good as being there, the fuzziness even helped.
I'm so glad that you are now better and back to posting good stuff for us. Thanks.

Oh I just love love love being able to hear all these wonderful and talented and very special poets read their work. Thank you, Janet!

It is wonderful to hear everyone's voice. Thank you for sharing this. I got my anthology last week; what a treasure it will be. I'm happy you received such good news this week. Thank you Sylvia.

Thanks for posting the videos. I really enjoyed them!

Thank you, Sylvia, for posting this! Now my family will believe that I was not just gambling throughout Vegas (hee hee!) Seriously, it was an honor to be part of this panel, and watching these lets me relive it. Thank you and Janet for putting this - and bringing us - together. We missed you and are so glad you are well. xo, a.

This was a great post and reminded me that you are a "do friend" of poetry. Thank you, Sylvia. BTW can you explain to me Poetry Fridays? I have seen it but I'm not sure what it is or what I can do.

Shawn said...
This comment has been removed by the author.
5:18 PM

I accidentally commented under my husbands account, hence the deleted comment above!
ANYWAY...
I am such a fan of all these poets and teachers. I thank you so much for sharing this post and putting a voice to the many names I look up to! Thank you.

Thank you all for your kind comments and happy thoughts. So glad everyone enjoyed the video snippets as much as I did. Extra thanks to Janet for filming!

And Tess, here's the lowdown on Poetry Friday:

In 2006 blogger Kelly Herold brought Poetry Friday to the “kidlitosphere” with bloggers gathering to post something about poetry for children on a weekly basis. Much like “casual Friday” in the corporate world, there is a perception in the world of literature that on Fridays we should relax a bit and take a moment for something special. Each Friday a different blogger volunteers to gather and host a list of poetry posts from participating blogs. You can share poetry on other days of the week too, but for those who are not already teaching poetry regularly, planning for Poetry Friday makes poetry sharing intentional and not incidental. Our book, THE POETRY FRIDAY ANTHOLOGY, provides guidance for doing just this-- every Friday for grades K-5, with a poem a week, plus activities for every single poem. I hope that helps!

I'm smiling ear to ear from all this poetry goodness. Thanks for sharing!

Finally getting over here to watch all these wonderful ladies do their thing, and what a treat it is. Thank you so much for making videos of this great event - next best thing to being there (and the time travel to 1967 was fun!). :)