Have you noticed it’s an election year? Who could miss it, right? It got me thinking about what “patriotic” poetry I could find to recommend for young people. My friend and collaborator, the amazing Janet Wong has a new book of poetry out this year that’s particularly appropriate and available in both e-book and print form, entitled Declaration of Interdependence: Poems for an Election Year. It’s a great addition to works that consider what it means to live in the USA, with a particular focus on our civic responsibilities and the democratic process. It contains one of my favorite poems, “Liberty,” an inspiring and clever riff on the “Pledge of Allegiance,” for a total of 20 poems on topics as timely as caucuses, political ads, ballots, and the Bill of Rights. The book even includes a “Voter’s Journal and Discussion Guide.”

I have a free copy to share (along with an autographed copy of her autobiography for kids, Before It Wriggles Away) to a commenter on today’s post (chosen at random).

Meanwhile, here’s my current list of patriotic poetry for kids. Please let me know any book titles I can add to my list. Thanks! 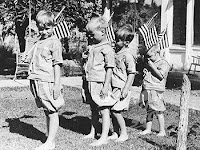 Poets have written about pride in homeland, about the search for a national identity, the value of one’s cultural heritage, and finding a place in an adopted country, among other patriotic topics, for many generations. How has this been expressed in poetry for young people? Here are a few outstanding examples.

*****By the way, this is one of several hundred lists of poetry books organized around popular themes and topics that I have compiled for my upcoming book, The Poetry Teacher's Book of Lists. More info to come very soon...

Join the rest of the gathering at Poetry Friday hosted by Greg at Gottabook. See you there!

Congrats to Janet and thanks for the inclusive round-up of titles!

"Have you noticed it's an election year?": great opening line, Sylvia! (Could anyone actually ignore/escape all the ridiculous election news?) Thanks for highlighting my new book--and I'm looking forward to your book of book lists!!

Hi Sylvia, I always always always look forward to your lists! This is one of my favorites. I shall also look out for this lovely book. :)

Is this heaven? Am I still alive? I just stumbled onto this wonderful blog that is filled with information I cannot wait to share with our teaching staff in the Grand Ledge Public Schools in Michigan! I hope to bring you many more subscribers! Bridging the gap between information and our experience of its impact on our lives, is a perfect place and function for poetry. It illustrates and names our experiences, our questions, and our answers. I love the idea of political process poetry and I CANNOT WAIT to see your book of lists! If we can incorporate the love of language itself into the learning that comes from USING language, we will expand the educational experience for our students. Thank you for this wonderful blog! (I run an elementary school library).

This book looks great! I just bought Janet's ebook Once Upon a Tiger, which I'll be reading during my travels this coming week. Her work is so thought-provoking.

I have a book called Tiny Dreams, Sprouting Tall: Poems About the United States (Capstone, 2009).

And how cool about your forthcoming book. Teachers will love using that to help them integrate poetry into different content areas!

always love your site. And I love Janet Wong's poetry. Hope I win her book. Keep up the good work.
diane

How wonderful to hear from you all! Thanks so much for stopping by to read and comment. The "contest" winner is Elizabeth McBride, but I have ARCs (advance copies) and extras of new poetry books that I'd be happy to send as consolation prizes to each of you. Just email me your mailing address please. Send to svardell at gmail dot com

And stop by any time, friend!
Sylvia

Congratulations, Elizabeth! (You see? Yes: this IS heaven...Poetry Heaven.) If you'd like me to send you signed bookplates for your books, just send me an email with your address (janet AT janetwong DOT com)