The International Youth Library (IYL), the world's largest library of international books for children and young adults, compiles an annual list of best children's books from around the world called the White Ravens list.The 2011 list includes 250 titles in 30 languages from 40 countries. Of these, I found 14 poetry titles-- from 12 different countries. 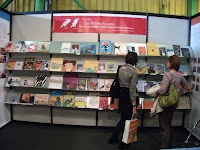 Pictured on the left, is the IYL booth at the Bologna Book Fair where all the White Ravens books are displayed for study and perusal. It's one of my favorite parts of attending the Fair and I'll miss having the opportunity to see these books "in person" now that my Bookbird editorship is ending and I'm not likely to be at the Fair often in the future.

And below are the final poetry selections from the 2011 White Ravens list, representing Canada, Finland. Hungary, Latvia, and Ukraine. (I was not able to find volunteers to film them reading poems from these books-- sorry!) 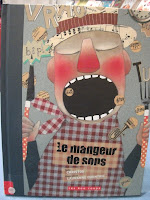 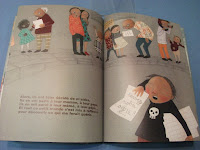 (French)
Christos (text)
Quentric, Lauranne (illus.)
Le mangeur de sons (The sound eater)
Montréal [Québec]: 400 Coups, 2010. – [32] p. ISBN 978-2-89540-501-6
City – Noise – Sound – Quiet – Glutton – Illness – Poetry
A very special glutton eats all sounds, tones, and noises of the city. As he grows older he suffers from severe digestive problems as a result. The doctor puts him on a diet – unsuccessfully, since he continues to uncontrollably gorge himself on city noise. One day he becomes very sick from this. The children of the city want him to become well again and together with the adults find ways to reduce the noise in the city. Suddenly, wholly forgotten sounds can be heard again, such as the singing of house keepers, the rustling of leaves or even just the wind. Illustrator Lauranne Quentric transforms Christos’s clever poem into sassy colourful collages. (Age: 6+) 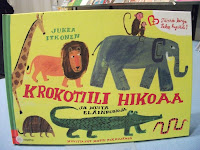 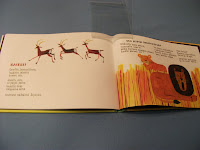 )
Itkonen, Jukka (text)
Pikkujämsä, Matti (illus.)
Krokotiili hikoaa ja muita eläinrunoja (The crocodile is sweating and other animal poems]
Helsinki: Kirjapaja, 2010. – 32 p.  ISBN 978-951-607-835-2
Animals – Poetry
The book cover announces it: this book is good for you! And it’s true. Jukka Itkonen’s entertaining poems and children’s riddles bring the animal kingdom to life. It’s especially the exotic animals of Africa who bound across the pages – like a zebra whose white jacket gets black stripes from the shade of the baobab tree, or like a termite who is never home alone because it is always surrounded by a thousand friends. Very witty, sometimes also spooky and exciting, these poems are pure fun. The illustrations of Matti Pikkujämsa lend Jukka Itkonen’s verses special shading: colourful and surprising in their creativity, they add an extra dimension to the work. (Age: 3+) 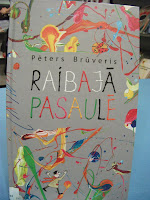 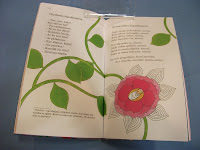 LATVIA (with Russian poems, too)
Brūveris, Pēters (text)
Maurīte, Ieva (illus.)
Raibajā pasaulē (Multi-coloured world)
Rīga: Zvaigzne, [2010]. – 78 p. ISBN 978-9934-0-0181-9
Everyday life – Nature – Poetry
Pēters Brūveris is one of Latvia’s most popular and renowned poets. This time, he has not written poems for an adult audience but for children. Complemented by Ieva Maurīte’s illustrations partly drawn on dyed pages, each of the poems shows through its rhythm, language, and topic how varied the “Multi-Coloured World” can be. With lightness and charm, the texts offer a glimpse into wondrous worlds within our everyday experiences: This includes fantastical mirages and amusing animal antics as well as thoughts about friendship. One special aim of this book is to promote mutual understanding: It contains three Russian poems that serve as an introduction for Latvian children to the mother tongue of the Russian minority living in their home country. (Age: 5+) 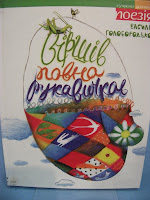 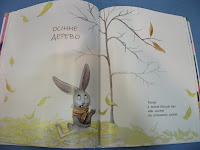 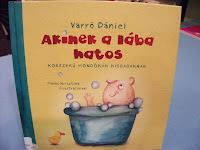 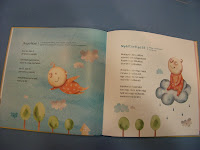 Varró, Dániel (text)
Maros, Krisztina (illus.)
Akinek a lába hatos. Korszerű mondókák kisbabáknak
(Feet in size six. Modern children’s songs for the littlest ones)
Budapest: Manó Könyvek K., 2010. – 31 p. (Series: Manó könyvek)
ISBN 978-615-5028-05-2
Father – Child – Poetry
In fun, reflective poems, a young father experiences and accompanies the first months of his child’s life. From waiting in anticipation of the birth, to diaper changing, feeding, burping, going for walks, all the way to a bedtime song for baby and daddy, the young man takes on his new role responsibly. Tongue in cheek, the author includes a performance instruction for each part of the poem. So, for instance, one is advised to “speak with a high voice”, “to speak next to the computer”, or “When we don’t know what else to do”. The book offers a fresh take on daily familial life, which a man meets with enthusiasm and joy. Large amusing illustrations that combine water colour with pastel chalk sensitively and aptly accompany the poems. (Age: 1+)

Children's Poetry Calendar
One last nugget: The IYL is collaborating again to produce a second calendar featuring poetry for children. It's a European style calendar with one page-- and one poem-- for each week of the year. It's produced in gorgeous full color on thick, creamy paper and is truly a work of art. Each poem appears in its original language, as well as in German (since it's produced and distributed in Germany). It's an amazing "anthology" of world poetry for children and last year's first calendar became a bestseller and I'm sure this new one will too. It will be available via Amazon.UK, I believe. Here's a sneak peek at the calendar cover: 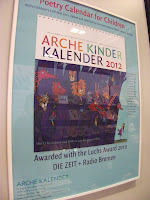