It is with great sadness that I share the news of poet Karla Kuskin’s death last week. She was the first major poet whose work I encountered when I was a teacher and graduate student in the 1970’s. I met her and appreciated her smart, clever wit and way with words. She showed me that poetry for kids could be funny, yes, but even more. And now I find that so many people don’t know her work—as with many of the earlier “greats”-- and that’s a shame. One of my favorite poetry collections for kids (of all time!) is Dogs and Dragons, Trees and Dreams which you can buy “used” for a penny. You’ll find “Bugs” there, as well as “Lewis has a trumpet” and “Write about a radish”—all with short notes from Kuskin about how each poem came to be. And one of my very favorite poems is from another Kuskin collection, Near the Window Tree, which conversely is available for $150 on Amazon! It’s 35 years old now, but this poem is perfectly timeless, don’t you think?

Three wishes
Three.
The first
A tree.
Dark bark
Green leaves
Under a bit of blue
A canopy

To glimpse sky through
To watch sun sift through
To catch light rain
Upon the leaves
And let it fall again.
A place to put my eye
Beyond the window frame.

Wish two:
A chair
Not hard or high
One that fits comfortably
Set by the window tree
An island in the room
For me
My own
Place to sit and be
Alone

My tree
There.
Here my chair.
Me.
Rain, sky, sun
All my wishes
All the things I need
But one
Wish three:
A book to read.

by Karla Kuskin
from: Near the Window Tree, Harper and Row, 1975.

Doesn’t it have a delicious rhythm and structure? And doesn’t it capture a wonderful reading moment? And isn’t that echo of three magical wishes absolutely perfect?

One of my favorite quotes about teaching poetry is a Kuskin gem: “Instead of building a fence of formality around poetry, I want to emphasize its accessibility, the sound, rhythm, humor, the inherent simplicity. Poetry can be as natural and effective a form of self-expression as singing or shouting.” This is almost a “mission statement” for my own work in poetry. 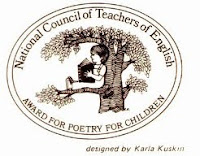 And of course, you may also know that Kuskin was an artist and illustrator and created the unique seal for the National Council of Teachers of English Excellence in Poetry Award.

Here’s an excerpt from my entry on Karla Kuskin in Poetry People, as a bit of background bio:

Karla Kuskin was born on July 17, 1932, in New York City. Encouraged by her parents and teachers, Kuskin began writing poetry as a young girl. She attended Antioch College and earned a bachelor’s of fine arts degree from Yale University. She is married and has two grown children who are photographers.

Karla Kuskin’s first book developed from her senior thesis. Roar and More, a children’s book she wrote and designed, was published in 1956, in a slightly altered form. Kuskin has gone on to become a prolific writer and illustrator of over fifty works of children’s poetry, storybooks in verse, easy readers, and even nonfiction. Her many awards include American Institute of Graphic Arts Book Show awards, American Library Association Notables, International Reading Association Children’s Choice distinctions, a National Book Award nomination, and the National Council of Teachers of English Award for Excellence in Poetry for Children award given for a poet’s entire body of work.

Karla Kuskin’s pictures and poetry are brimming over with the experiences of children growing up in a big city. For a wonderful compilation of poems from several previous works as well as new poems, look for Moon, Have You Met My Mother? The Collected Poems of Karla Kuskin (HarperCollins 2003)…. Kuskin shares further insights in her autobiographical picture book, Thoughts, Pictures, and Words (Richard C. Owen 1995).

Many of Kuskin’s poems have a strong voice or distinctive structure that lends itself to being read aloud and performing chorally. For example, try “The Question” (Dogs And Dragons), a poem that poses multiple answers to the question, “What do you want to be when you grow up?” Different groups or individual children can each pipe in with a different answer from the poem, “I think I'd like to be the sky,” “Or maybe I will stay a child," etc. Kuskin also has written many poems for children that incorporate a linear format that lends itself to line-around reading. For example, look for “Rules” (Dogs and Dragons), a listing of “rules” such as “Do not jump on ancient uncles” that children will find hilarious. And of course they may want to generate their own list of crazy rules to follow.

Finally, here’s a link to Karla Kuskin's obituary in the New York Times.

I hope there’s a run on her work in every library and bookstore.

A wonderful tribute. And while I didn't know her, you've given me an opportunity to discover her work. Thank you.

I checked out one of her books yesterday, Sylvia--just in memory of a favorite author.

This is a nice tribute you've written here.

Lovely post, Sylvia. Kuskin pours a child's heart all over the page.

Thanks for this tribute, Sylvia. Karla Kuskin was one of my favorites.

Notes from a Virtual Easel said...

As a teacher and school library specialist, I knew Ms Kuskin's work well. Thank you for this lovely remembrance.

Courtney at SL's No Ennui said...

Oh, a new favorite poet! Thank you for this treasure!

Many years ago, when I first started trying to write poems for kids, I came across "Sitting in the Sand" by Karla Kuskin. I still remember where I was -- that was the impact her poem had on me. I saw what could be done and I realized how terribly far I had to go. Thank you, Sylvia, for remembering a wonderful poet.

Thank you all for your support and kind comments. It's lovely to remember Karla's work together and to share it with "newcomers!"
Sylvia

This is a funny memory of Karla, whom I knew very well. She designed the Medallion for the NCTE Poetry Award and became the
third recipient in 1979. I always
teased her telling her the only reason she won the award was that
she did design the medal. We always laughed over this.

Lee, thanks so much for sharing that lovely, personal memory. That helps us feel even more connected with her and her work!
Sylvia

Thank you for the memories about Karla. I quote her and cite you in my poetry chapter in the IRA book just out, Children's Literature in the Reading Program, An Invitation to Read.
David

Thank you, David. I look forward to your chapter and the new IRA book. Congrats to you!
Sylvia

Sylvia, Thank you for posting this.

Karla was and still is my Mom. Thanks for posting this.