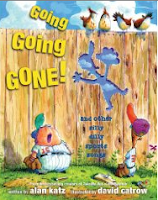 While I’m featuring funny poetry, I have to mention the next book in Alan Katz’s series of “silly dilly” song-poems: Going, Going, Gone!: And Other Silly Dilly Sports Songs. This collection of sports-themed songs joins his previous works, also illustrated with hilarious overstatement by David Catrow.

This has evolved into quite a library of song-poem-parodies that are half camp song and half vaudevillian schtick and all illustrated in hypercolorful cartoons and caricatures. Of course they all BEG to be SUNG, not just read aloud, and Katz identifies which song tune to use for each poem-song. Be brave and lead the kids in singing and TAPING them, to make your own audio or podcast. (But don’t post without permission from the publisher please.)

You’ll find 14 songs showcasing a variety of sports such as baseball, fishing, (miniature) golfing, ice skating, tennis, cycling, football, swimming, bowling, archery, and soccer. Details of the sport are noted alongside all the things that can go wrong, too. And I find it interesting the friendships and family relationships usually form the backdrop for each song, making it fun to sing and perform these in groups of kids or family members. Finally, each poem ends in a surprise or a twist that is sure to generate laughter.

Here’s just one example, the “kick-off” first poem in the book, “On Top of the Bleachers” (sung to the tune “On Top of Old Smokey”).

On top of the bleachers,
that’s where we just sat.
Dad bought me a pennant,
a scorecard, and hat.

He got me some peanuts,
a soda, and chips,
a ballplayer puppet
that swings as he flips.

Next I got a helmet,
a bat, and a glove,
a giant foam finger
the crowd doesn’t love.

Dad purchased a hot dog,
a cheese-filled dough puff,
an official backpack
to carry my stuff.

Twelve trips to the bathroom
Dad had to endure.
There mighta been a ball game…
though I’m not really sure.

Challenge creative kids to compose their own song-poems about other favorite sports and record or perform them. Look for more fun and funny sports poems in Jack Prelutsky’s Good Sports; Rhymes About Running, Jumping, Throwing, and More (Knopf, 2007).

Image credit: alankatzbooks.com
Posted by Sylvia Vardell at 12:44 AM