TLA Virtual Poetry Round Up

As you probably know, the annual conference of the Texas Library Association was cancelled--like so many other events-- due to the coronavirus outbreak we are all facing. It's always a great conference, so it's disappointing for all of us, but I'm especially disappointed to miss my 16th annual Poetry Round Up session which is always a hit. So, I hope to share a few videoclips that the poets who were set to appear have kindly made. Enjoy! And be sure to look for their new books! 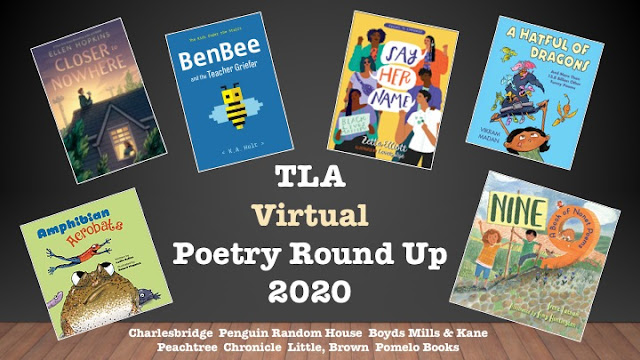 First up: Irene Latham! Irene is the author of several books of fiction, nonfiction, and poetry: including Dear Wandering Wildebeest, When the Sun Shines on Antarctica, Fresh Delicious, and Can I Touch Your Hair? (with Charles Waters). She won the Lee Bennett Hopkins Promising Poet Award and is a regular speaker at schools, libraries, and festivals. She lives on a lake in Alabama with her family and is learning to play cello (spoiler alert!). Here, she talks about her newest book, Nine (published by Charlesbridge), and treats us to a concert!

Now hold to your hats, while Irene serenades us with her cello!

Thanks so much for taking the time to create these videos for us, Irene! WONDERFUL! I can't wait to get my hands on Nine, too.

[I debated about creating new posts for each poet, but lots of people are linking to this posting to share with kids (HOORAY!), so I'm going to keep adding poets right here!] 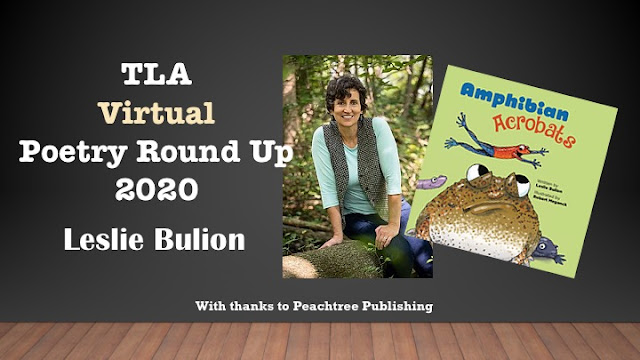 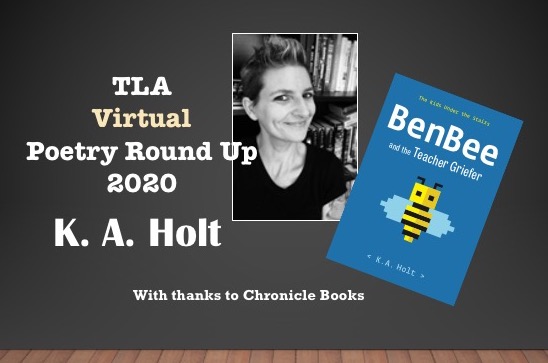 Poet Kari Anne (K.A.) Holt is the author of several middle grade novels, especially novels in verse such as Rhyme Schemer, House Arrest, Knockout and the #ownvoices Redwood and Ponytail, as well as the picture book, I Wonder, illustrated by Kenard Pak. She lives in Austin, Texas, and is a co-founder of Typewriter Rodeo, a troop of poets who compose poems on request on-the-spot. Here she talks about two of her novels in verse. First: House Arrest.

Next, Kari talks about her forthcoming book, BenBee and the Teacher Griefer (I can't wait to read it!):

Next up: Zetta Elliott 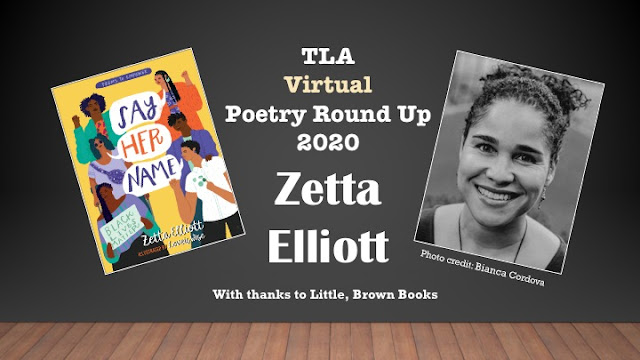 Zetta Elliott is a poet, author, and an educator who was born in Canada and currently lives and writes in Pennsylvania. She earned a PhD from NYU and is the award-winning author of multiple works for adults and young readers including fiction, fantasy, plays, essays, a novella, picture books, YA novels, and middle grade fantasy. Her latest book is a poetry collection for young adults, Say Her Name. In the video linked here (click here), she reads a few selections from this new book, including a very helpful poem entitled, “Self Care.” Enjoy!

Elliott has also created a poetry workbook for teens, Find Your Voice, and I can send you a pdf of that (with Zetta’s permission) if you leave your name and email address in the comments. 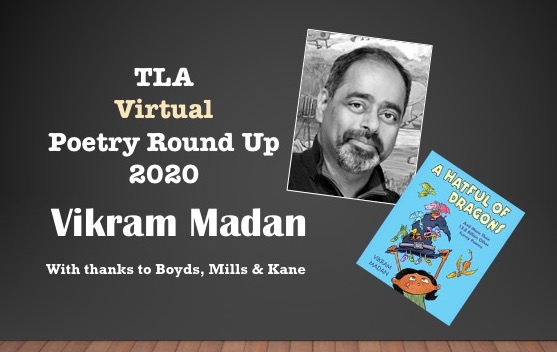 As poet and artist Vikram Madan admits on his website, he grew up in India where he really wanted to be a cartoonist, but ended up an engineer. He now lives in Seattle and worked for years in the tech industry and then made the switch to art and writing, creating editorial cartoons, drawing and painting and exhibiting his art, and writing poetry for young people. His poetry is full of humor and wordplay, including The Bubble Collector, Lord of the Bubbles, and his new book, A Hatful of Dragons. He shares a poem from that new book here:


And here Vikram leads us in a 30-second flip through his new book:


And just for fun, Vikram has created a music video for a poem from his first book, The Bubble Collector:


Thank you, poets, for being part of my virtual Poetry Round Up! It's so kind of Irene Latham, Leslie Bulion, Kari Holt, Zetta Elliott, and Vikram Madan to take time to make videos for us to enjoy. I hope I can bring them all to TLA in the future for an in-person rock concert of poetry! Meanwhile, take care of yourselves, everyone-- and share poetry-- so therapeutic just now (and always!).
Posted by Sylvia Vardell at 8:27 PM 25 comments:

Three major poetry awards announced the winners in the last month, so it's time to catch up and corral that info. I was lucky enough to serve on the Round I panel of judges for the Cybils 2020, so let's start with that one. 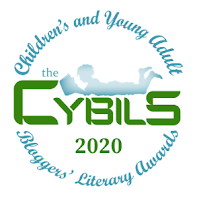 The 2020 winner in the poetry category is:
Ink Knows No Borders: Poems of the Immigrant and Refugee Experience collected by Patrice Vecchione and Alyssa Raymond published by Seven Stories Press

Here's my blurb for the award winner:

Ink Knows No Borders: Poems of the Immigrant and Refugee Experience edited by Patrice Vecchione and Alyssa Raymond is a poetry anthology for older readers that celebrates the lives and experiences of immigrants, refugees, exiles, and their families, who have made this land a home for generations. With poets like Elizabeth Acevedo, Tarfia Faizullah, Hala Alyan, Gala Mukomolova, Bao Phi, and Ocean Vuong, from countries such as Iran, Russia, Mexico, Vietnam, Sudan, Haiti, Syria and beyond, Ink Knows No Borders creates a sense of the immigrant and refugee experience that… honors its complexity and variety.” It gives voice to the experiences of young adults first and second-generation immigrants and refugees as well as providing a historical perspective in poems by Ellen Bass, Eavan Boland, Jeff Coomer, Li-Young Lee, and others. Although each poem channels an individual experience, the collection also offers universal themes on the power of family love, the shock of war, and the isolation of relocation. The poems take us from trauma to hope and as Poet Laureate Juan Felipe Herrera reminds us, “let me tell you what a poem brings . . . it is a way to attain a life without boundaries.” 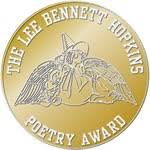 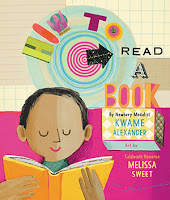 How to Read a Book written by Kwame Alexander, illustrated by Melissa Sweet, and published by HarperCollins Children’s Books.
Here's the SLJ review from my Legacy colleague, Lucia Acosta:

"Award-winning poet Alexander compares reading a book to peeling the gentle skin of a clementine, digging in to its juiciness, enjoying it "piece by piece, part by part," until you can "watch a novel world unfurl right before your eyes." And who better to illustrate this delicious poem than Caldecott Honoree Sweet. The artwork is done in watercolor, gouache, mixed media, handmade and vintage papers, found objects including old book covers, and a paint can lid. Not a splash of color, a piece of paper, or a line is out of place. Starting with the initial collage that incorporates the building blocks of reading (the letters A to Z) and the lines from a poem by Nikki Giovanni that careful readers will have to pay attention to see, the tone is set. "So get/real cozy/between/the covers/And let your/fingers wonder/as they wander…" for there is much to relish in this poem and its exuberant images. "Squeeze/every morsel/of each plump line/until the last/drop of magic/drips from the infinite sky." The book includes a note from both the poet and the artist. VERDICT A beautiful book not to be rushed through, but to be enjoyed morsel by tasty morsel."—Lucia Acosta, Children's Literature Specialist, Princeton, NJ 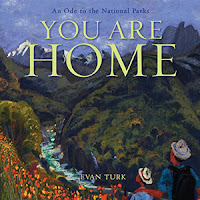 HONOR BOOKS
You Are Home: An Ode to the National Parks, written and illustrated by Evan Turk, published by Atheneum Books for Young Readers, an imprint of Simon & Schuster

"In simple, soaring language and breathtaking art, acclaimed author-illustrator Evan Turk has created a stirring ode to nature and nation. From the rugged coast of Maine to the fiery volcanoes of Hawaii, You Are Home reminds us that every animal, plant, and person helps make this land a brilliant, beautiful sanctuary of life."

Other Words for Home by Jasmine Warga, published by Balzer + Bray, an imprint of HarperCollins Children’s Books.

"Convincing and authentic, infused with thoughtfulness, humor, determination, and hope.... A realistic portrait of the strength it takes to move to a new country, as well as of the complicated dynamics between first- and second-generation immigrants." (Horn Book, starred review) 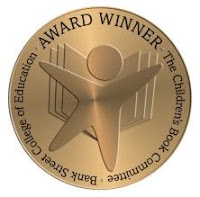 Claudia Lewis Award
"The Claudia Lewis Award, given for the first time in 1998, honors the best poetry book of the year. The award commemorates the late Claudia Lewis, distinguished children’s book expert and longtime member of the Bank Street College faculty and Children’s Book Committee. She conveyed her love and understanding of poetry with humor and grace."

"Told through medieval poetic forms and in the voices of the people and objects in Joan of Arc’s life, (including her family and even the trees, clothes, cows, and candles of her childhood), Voices offers an unforgettable perspective on an extraordinary young woman. Along the way it explores timely issues such as gender, misogyny, and the peril of speaking truth to power. Before Joan of Arc became a saint, she was a girl inspired. It is that girl we come to know in Voices."

Posted by Sylvia Vardell at 10:08 AM No comments: