Time to catch up on the Round Up.
Next up, Marilyn Singer!

With a writing career that has spanned 35 years and bibliography that includes approximately 90 titles, how do you briefly introduce Marilyn Singer? Do you discuss her many genres? Name one and she has written something that we can categorize under that heading. Awards? Too numerous to list.

Marilyn started her writing career creating teachers’ guides for filmstrips. Her first children’s book, The Dog Who Thought He Wasn’t (Dutton, 1976), was a departure from her then typical norm of poetry, but it felt right, and so it began.

Marilyn is not only prolific, but passionate. Her many titles reflect personal events and interests. Through her works her love of animals is present as is her personal beliefs in social equality and discourse. Many of her nonfiction works were created because of annoyance: “When I heard one too many folks call a wasp a bee, or a gorilla a monkey… I got bugged enough to write A Wasp is Not a Bee (Holt, 1995)… Then there was a the time at Prospect Park Zoo when a little boy asked his mom why baboons have such big red butts.. the mother loudly replied ‘Because they’re sick.’ Instead of howling at her I came up with Bottoms Up!” (Holt, 1998). While irritation may have spurred these and other titles, her writing shows nothing but respect for her young audience.

The world of chil 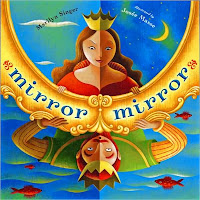 dren’s poetry has been gifted with Marilyn’s talent. Her most recent contribution to this world was the invention of a new poetic form, the “reverso.” Seemingly simple, the poems, read in the traditional manner, hold one meaning, and when reversed, an entirely new one. She used this form in her 2010 title Mirror, Mirror: A Book of Reversible Verse (Dutton, 2010), which fits in perfectly with the subject of the title, fairytales, from both the point of view of the traditional hero and the villain. Mirror, Mirror is included on this year’s Texas Bluebonnet Master List. Her most recent books are: Tallulah’s Tutu and Twosomes: Love Poems from the Animal Kingdom.

Throughout her career you will see two common denominators: her respect for her audience and her love of words. Marilyn states “And what better to do with such enchantment than to bring the magic to other, children in particular, by becoming a writer?”


Here, Marilyn reads the "Hansel and Gretel" poem from Mirror, Mirror. She manages to be BOTH the witch AND Gretel with her masterful delivery!

Thanks to Marianne Follis for research and writing our intros!