Time to catch up on the Round Up.
First up, Calef Brown!

Children’s poet and illustrator Calef Brown started his career creating art for the New York Times, Rolling Stone, Newsweek and the New Yorker. In addition to his critical success with his work in children’s literature, Brown still contributes covers and art work for these periodicals as well as packaging art for CDs and other grown up products.

In an interview with IllustrationMundo, Brown states that he became interested in children’s books because he wanted to create “something of my own that would have a longer shelf life than the magazine pieces that I was doing.”

Brown has succeeded in creating a lasting colorful and character filled collection of work. His books unite art and text in imaginative flights of fancy resulting in acrobatic exercises for the tongue, eyes and mind.
Brown grew up in Vermont, Manhattan, Philadelphia and Boston, and currently resides in Maine. According to his website, his favorite place in the world is India. Four of his many books were written during visits to the country. Among his titles are: 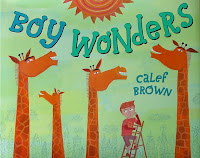 s Slacks: 14 Stories
• Dutch Sneakers and Fleakeepers: 14 More Stories
• Tippintown: A Guided Tour
• Flamingos on the Roof: Poems and Paintings
• Soup for Breakfast: Poems and Pictures
• Hallowilloween: Nefarious Silliness
*His latest: illustrations for His Shoes Were Far Too Tight by Edward Lear "masterminded" by Daniel Pinkwater
• and the upcoming Boy Wonders (which he shares excerpts from in the videoclip below)

His work as author/illustrator has received many awards and accolades, including, the 2007 Children’s Book Council Choice and the Myra Cohn Livingston Award for Poetry,

Brown hopes that you will read them aloud to fully appreciate the auditory qualities of his language. “I want them to be musical – some rhythmic, percussive and lively, other quiet and atmospheric.” A Publishers' Weekly review of Soup for Breakfast noted, “A smorgasbord of punditry and weirdness, this collection will remind kids that poetry and pictures can exist just for kicks.” Can there be higher praise than that?

Here's a bit of Calef's presentation at the Poetry Round Up at the April conference of the Texas Library Association in Austin. He is amazing in his ability to deliver his poetry FROM MEMORY in a rapid fire delivery that is part standup comic, part medieval minstrel, and part poet savant!

Calef is one of those rare creatures who writes unique and distinctive poetry AS WELL as creating vivid and fantastical art-- both of which kids truly respond to. Plus, his deadpan delivery is delicious!

Thanks to Marianne Follis for research and writing intros!