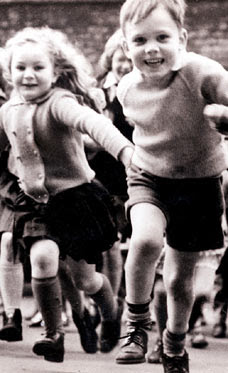 Yesterday featured Nikki Grimes’s lovely desert poem. Now she tags Tracie Vaughn Zimmer who writes, “I'm thrilled to play with poetry of course and despite the ‘busyness,’ I must toss the ball! I'm so honored to come after Nikki who has been a friend of mine now for several years.

Here's a poem from SKETCHES FROM A SPY TREE which features a narrator, a plant, and a relationship, too. But, uhm, a bit naughtier girl than Nikki's sweet Teresa is my Anne Marie in spring.” Here is Tracie’s mischievous poem. 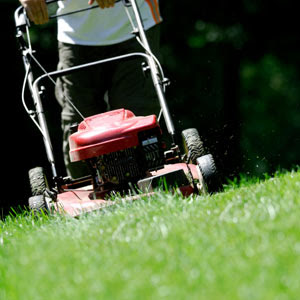 Mr. O'Brien
(red brick house
across the back fence)
tries to train his grass--
not his dog to fetch
or his son Paul to pitch
but one million blades of bluegrass--
to behave!

Twice a week
he cuts it down
whips back the edges
blows the cuttings and
sweeps the strays.
He even
claps his shoes
like dirty chalkboard erasers
out in the street
so the whiskers of grass
can't follow him home. 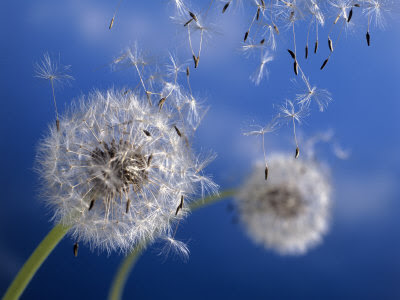 I know I shouldn't,
but when the puffs of dandelions
appear in our yard,
I twist their rubbery stalks and
blow the seeds
light as snowflakes
across the back fence.

Copyright 2010 by Tracie Vaughn Zimmer used by permission of the author, who controls all rights.

Five fun facts about Tracie Vaughn Zimmer
*she has a twin sister
*her first journal entry was dated December 24, 1978
*she teaches school in Ohio
*she has a dog named Louie and a cat named Mickey
*she won the Schneider Family Book Award

Next up: Janet Wong

Image credits: tagyoureitonline.com;captainstlucifer.wordpress.com/2007/08; http://www.tracievaughnzimmer.com/TVZ/HOME.html;esquire.com/
Posted by Sylvia Vardell at 12:06 AM

Hooray for the hometown (well, home STATE anyway) girl and for using dandelions to make the world a more spontaneous and less ordered place!

What a delightful poem. I love poems that paint a vivid picture in my mind as I read.

This one does exactly that. I even chuckled as I've had my run ins with a few dandelions in my day.

You are so delightfully subversive, Tracie.

TO THE DANDELION REVOLUTION!!

(And thank you for tagging me!)

What a lovely poem!