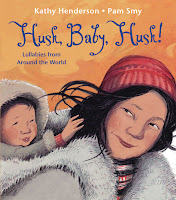 For the next few weeks, I’d like to share more info about new 2011 poetry books out this year. Several of my students this summer created digital trailers and readers guides for new poetry books that they have given me permission to share. Watch for them.   But first, I’m happy to share an interview with a new writer who has created a lovely collection of lullabies from around the world. The book is Hush, Baby, Hush! Lullabies from around the World by Kathy Henderson with illustrations by Pam Smy and published by Frances Lincoln Publishers. Here’s a link with more detailed info.

Here’s the scoop:
Hush, Baby, Hush! is a book of traditional lullabies gathered from all over the world to entertain children of all ages. These beautiful, simple songs and poems give a flavor of different parts of the world as well as show that soothing children to sleep is the same the world over. With words in the original language plus the English version, together with a melody line and delightful illustrations, this global collection is truly a book for all children; parents and educators can select from the songs to lull young children to sleep or to read and sing along with older children.  The lullabies included in Hush, Baby, Hush! come from Australia (Aboriginal), Austria, Bangladesh, Brazil, Czech Republic, England, France, Greece, Greenland, Hungary, India, Iran, Iraq, Italy, Jamaica, Japan, Korea, Malawi, Mexico, Nigeria, Norway, Russia, Spain, Turkey, USA (Hopi), Wales, and West Africa (Yoruba).

It’s really a gem— lovely for laptime or storytime sharing— with many cultures represented and engagingly illustrated. It’s quite an achievement to capture multiple languages and cultures, so I had several questions for Kathy and she was kind enough to answer them all. Here you go:

Where did the idea for this book come from? Do you have background or training in this area (in poetry, folklore, linguistics, anthropology, etc.)?

I’ve wanted to do a lullaby book for ages. I’ve been interested in the oral tradition and how singing happens in ordinary life for many, many years. My first ever book was My song is my Own – 100 Women’s songs from the British oral tradition which was result of two years research (and of course included some lullabies).

The book also comes from my personal experience – as a child and as a mother (see the dedication), through my early training in music, a degree in English from Oxford University and a long career as a children’s author, illustrator and poet.

You include an excellent and impressive list of source notes. How did you build this network of resources?

Research over many years, many people and many places. Sources included books and recordings, contacts, friends (and friends of friends), stopping people in the street and asking them, email, internet, people singing lullabies down the phone onto my answering machine. People above all.

I love that you included the music for these lullabies at the end of the book. Any chance of a CD or downloadable audio (from a web site)?

The publishers are looking to produce a CD to go with the paperback edition when it happens. No date yet. Naturally I wanted to do a CD from the start but the ‘market’ view was that this might disadvantage the book because, I was told, librarians don’t like books with CDs in them.

I’m so glad you included the lullabies in both their original languages (first) as well as in English (and explained the transliteration). Who wrote these English versions? Did you tweak them for rhythm and structure?

It was very important to me that they should be in their original languages and that we should be able to sing them in both versions. The sound patterns of lullabies are crucial and fascinating and cross languages. As a writer I’ve always been acutely aware of the importance of the sound in writing for young children (and their parents and carers) and lullabies have much to teach us.

The translation and the English versions are mine. Wherever possible I tried to create a song that would fit the original tune while staying as close to the original words as possible but still working in its own right! This included translating from languages I don’t speak myself – like Korean or Japanese – and don’t even know the script. With these I sat down with the singer and went through the original, transliterating syllable by syllable to get the sound of the song and then again to get the exact meaning of every word before attempting to render an English version.

Needless to say I still look at my translations and wish I could tweak them some more. Traditional lullabies are sung in for years and years, generation after generation and sit so comfortably in their tunes and have a wonderful spare quality which we writers can only begin to emulate.

How did you go about selecting these particular lullabies for the book? Were there others you would have liked to include? Any plans for a sequel or companion book?

With difficulty! There are so many wonderful lullabies to choose from, from way back in history (– the earliest I have are from 2500 BC) and right across the world. The first selection principle was that the lullabies in this book should come from the oral tradition and not the literary one (and there are many fine ‘written’ poems and lullabies to be found in books of course but they are very different).

Then came the problem of how to represent the whole world in 38 pages!? I could have filled hundreds of pages. Instead I tried to give a glimpse of the range of kinds and moods of lullabies and to shape the book into a sequence that travels through different phases of the day into night at the end to make it a satisfying picture-book read. I also tried to represent as wide a range of countries as possible but the constraints of space were extreme and the demands of co-edition publishing another influence.

I would love to do a sequel or companion book but the economics of publishing will decide (So please pass the word and tell all your friends to go and buy it!)

The design and illustrations are so pleasing and suit the lullabies so well. Did you have input here or collaborate with the artist or designer at all?

Yes I was closely involved. (Background here is that I have been a children’s writer and illustrator myself for many years and have also worked as an editor in children’s book publishing) The publishers consulted with me from the beginning over their choice of illustrator and before Pam started work we had a meeting to talk about it in which I was able to hand the project over to her. I explained how I’d constructed the sequence and suggested the range of situations and people I thought it would be good to illustrate – and of course background stories like the one behind All the Pretty Little Horses (p 24). After that the project was all hers to take away and make her own and Pam did a wonderful job. I also had the opportunity to make comments at the rough drawing stage and again at the very end.

P.S. Kathy was a guest on Wisconsin Public Radio's "Here on Earth" last month, and she discussed the uniqueness of lullabies and how she went about collecting them for the book. The segment also features some lovely musical versions of the lullabies in the book. Check it out.

ALSO: Don’t forget about Danielle (Dani) Wright’s work in New Zealand and her web site of nursery rhymes from around the world.

PLUS: From the iBbY Ireland Newsletter (Vol. 25 June 2011)
Playtimes: A Century of Children's Games and Rhymes website
The Playtimes website is part of a wider UK Arts and Humanities Research Council funded project entitled "Children’s Games and Songs in the New Media Age," which seeks to highlight the importance of communication, sensory perception, orality and material culture within current scholarship and today’s digital culture. The project has digitized existing audio recordings, from the "Opie Collection of Children's Games and Songs" and also carried out a two-year study of playground culture today – focusing on two primary schools, Christopher Hatton school, in London, and Monteney school, in Sheffield. The digitized recordings of the Opie collection as well as the footage from the research projects have been used to create this website – a resource that not only preserves the games and songs, but is a resource to which people, particularly children, can contribute their own thoughts and ideas about play. Here is the link.

Posted by Sylvia Vardell at 7:49 PM

I've got to get this book. My first grandchild was just born--a beautiful baby girl named Julia Anna!