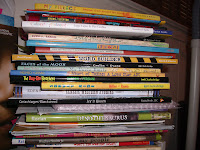 It’s May 1! Woo hoo! I promised a book-review-a-day for National Poetry Month and I can’t believe I delivered! That was exhausting and rewarding. And if you’re looking for info on new poetry for kids, here’s a summary of the poetry books I reviewed last month (followed by a poem by a nine-year-old from Poland!). Of course, I'll keep reviewing as I get my grubby paws on more new poetry books, but in the meantime, here's April in review(s): 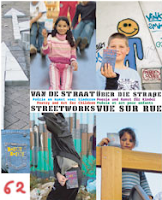 However, it’s not Poetry Friday without an actual poem, so allow me to share another nugget I gleaned from that amazing trip to the Bologna Children’s Book Fair in Italy in March. I met a woman named Jet Manrho (based in the Netherlands) whose life’s work-- Poem Express-- is traveling the world conducting workshops with kids to promote poetry appreciation, poetry writing, and creating posters in response to poetry. AMAZING! She regularly publishes a full color poster-size book of their work, featuring original poems by kids from around the world. Each page is a poem poster with an original poem written by a child along with the art she/he creates to go with the poem. Each poem appears below the art in four languages (Dutch, English, French, German). It’s a collection of real quality and ingenuity.

I have Volume 15 which includes 110 poem posters in fourteen languages from 29 countries. I’d like to highlight this somewhat snarky poem by a 9-year-old Polish boy. I love the attitude!

No matter who hard I tried,
even if you paid me,
I could never write
a poem.

by Piotr Sochaczewski, age 9, Poland
(Here is Piotr with his poster and poem!)


There are more opportunities for kids to continue participating on the Web, as well as more information about this very ambitious project! I thought this might be a particularly fun choice for today since our Poetry Friday Host is Allegro, an 11 year old poet herself. Thanks for hosting, Allegro.