THIS POEM IS A NEST by Irene Latham 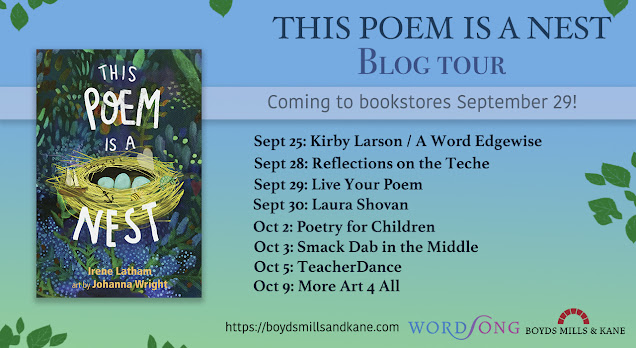 I’m so happy to feature Irene Latham today in celebration of her new book, This Poem is a Nest, illustrated by Joanna Wright and published by Boyds Mills & Kane. It’s a wonder: a collection of 161 “found” or “blackout” poems she has created all drawn from one central poem. Amazing!
Irene was kind enough to create a short video with a bit of background about this book and featuring three (of the eight) 3-word poems in the book: "Mad," "The Story of the Egg in Three Parts," and "Last Poem." Enjoy!
Irene Latham is the author of novels, picture books, and poetry books and winner of the 2016 ILA Lee Bennett Hopkins Promising Poet Award. Her poetry books include: 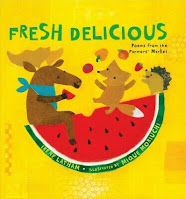 Dear Wandering Wildebeest: And Other Poems from the Water Hole. Ill. by Anna Wadham (Millbrook/Lerner, 2014)
Fresh Delicious: Poems from the Farmer’s Market. Ill. by Mique Moriuchi (Highlights/Wordsong, 2016)
When the Sun Shines on Antarctica: And Other Poems About the Frozen Continent. Ill. by Anna Wadham (Millbrook Press, 2016)
Nine: A Book of Nonet Poems. Ill. by Amy Huntington (Charlesbridge, 2020)
And her collaborations with Charles Waters:
Can I Touch Your Hair? Poems of Race, Mistakes, and Friendship (Millbrook Press, 2017)
Dictionary for a Better World: Poems, Quotes, and Anecdotes from A to Z (Carolrhoda Books, 2020) 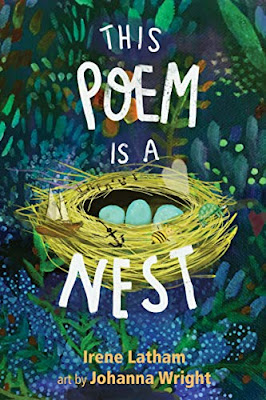 This Poem is a Nest is rooted in one original “nest” poem which features four parts: Spring, Summer, Fall, Winter—each written in three stanzas of three-lines (or tercets). It begins (and ends) with:
“This poem has twigs in it, and little bits of feather-fluff.”

It envisions a nest in a tree that houses young robins, weathers the seasons, and is then adopted by a mouse for its own young, coming full circle. Then, Latham harvests more poems from this poem and gathers them along the themes of
She also provides “Tips from a Nest-Builder” in the back for the budding poet. It’s a beautiful model of what is possible with poetry and how one poem can lead to another and another and another. One of my favorite pages features “alphabet poems” complete with a note from the writer: 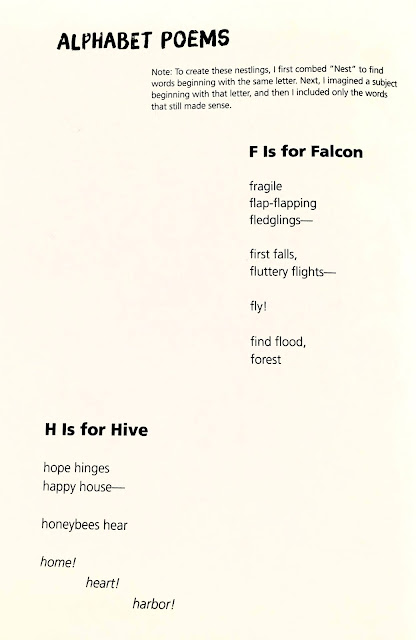 Now head on over to The Opposite of Indifference where Tabatha Yeatts is hosting our Poetry Friday gathering.

Posted by Sylvia Vardell at 3:50 PM

Thank you for posting the video, Sylvia! I got my copy of the book a couple of days ago and have been pouring over it. So creative! I want to try a nestling poem, too.

Thank you, Sylvia, for sharing about NEST! Those Alphabet poems were a lot of fun to create... I was in JOY-mode the entire time. (I wonder if birds feel the same way?) xo

Sylvia, thank you for presenting Irene's video. I love this thought expressed by Irene in the video: "It's fun to be a nest builder." I knew I would love this book when it first was discussed online. The idea of nestlings is so novel. I have one week to read the text and write a review for the blog tour so thanks for a good model.

I do love this new book and idea from Irene, Sylvia. It's going to be one I'll turn to when needing some new spark of inspiration! It's a lovely review for Nest!

This book is one I keep going back to and finding more and more inspiration! SO creative!

It's always nice to get to hear from Irene! Poems, hives, and nests aren't so far apart, are they? All are homes, hearts, and harbors.

Wonderful post celebrating this new book just out of the nest, Sylvia! And, Irene, thanks for making and sharing the video. (You know I'm in love with the sparsest of sparse poems.) Congrats on this lovely work which is sure to spark lots of creativity in classrooms, beyond just being enjoyed.
(& Sylvia - enjoyed Irene's post this week, too! Can't WAIT to see the new book THIS week!) XOs to both of you.

Such an inspiring book that I have spent hours with. I love it.

So wonderful! I loved the video. I have to order this book.

Your posts always make me happy because they are filled with inspiration. Thank you for sharing the videos and poems. Congratulations on another fabulous anthology. xo

Thanks, everybody! I am such a huge fan of Irene's work and this book is a special gem! Do not miss it!