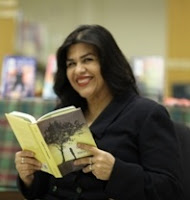 Fellow Texan Guadalupe Garcia McCall is raking in the awards this season. She was recently named a Lee Bennett Hopkins “Promising Poet!” The Lee Bennett Hopkins Promising Poet Award was established by Hopkins along with the International Reading Association in 1995 to encourage new poets in their writing. These poets have only published two books (to qualify for the award), but their work has already been judged to be of high quality. The award is given every three years. Congratulations, Guadalupe! Previous recipients include.

For more information, check out my resource book, The Poetry Teacher’s Book of Lists.

Rivera Award
In addition, her debut novel (in verse), Under the Mesquite, was also named a Tomás Rivera Mexican American Children’s Book Award recipient—an award that doesn’t necessarily go to a work of poetry. It’s given by the Texas State University College of Education which established the award in 1995 to honor authors and illustrators who create literature that depicts the Mexican American experience.  The award was named in honor of Dr. Tomas Rivera, a distinguished alumnus of Texas State University. For more information, look here.

TLA
Guadalupe will also be speaking at the upcoming post-conference poetry institute (P*CON) at the Texas Library Association conference next month in Fort Worth—along with Amy Ludwig VanDerwater, Charles Waters, Jane Yolen, Michael Salinger, Rebecca Kai Dotlich, Robert Paul Weston, Sara Holbrook, and Will Richey (and teens). An amazing line up, right? I'll be sharing more info about that event along with my ninth annual Poetry Round Up very soon.

Next?
I know Guadalupe is working on the finishing touches for another novel in verse and I can’t wait to see it. Meanwhile, be sure to check out her lovely novel of magical realism (not in verse), Summer of the Mariposas. Clearly, Guadalupe is a talent to watch...

I agree: Guadalupe is quite a rising star! And she actually has 3 poems in The Poetry Friday Anthology for K-5; there's also "Bailes," a poem about bailes and quinceaneras that will get girls thinking about who they want to be (4th Grade, Week 17: Time Together). It would be super if paired with Holly Thompson's "Cod," also about a girl with big dreams, in PFAMS (8th Grade, Week 36: Looking Forward).

Thank you for highlighting Guadalupe's talent and work, Sylvia - I look forward to reading more! And congratulations to Guadalupe on these impressive awards.

Thanks for catching that, Janet. I can't believe I missed it! I've gone back and added "Bailes" to the post.

I'm so excited to meet her at IRA!!